I wrote earlier about how gold and silver stocks were down in the second quarter of 2013 along with the metals themselves. In fact there dropped over the entire first half of 2013.

We invest a small portion in mining companies on the idea that it is better to invest in precious metal mining companies than the metals themselves. That doesn’t mean that they will always go up. In fact they may even be more volatile. Often they will go up when everything else is going down. Vanguard Precious Metals and Mining Fund (VGPMX) is an excellent example. Here is VGPMX going up between April 2001 through May 2002 while nearly every other other index was continuing to slide downward:

In this regard, a small amount of a fund like VGPMX can help provide some balance to the rest of your stock portfolio by moving in the opposite direction of a falling market. Unfortunately the reverse is also true. During the first half of 2013, US stocks appreciated nicely. During that same time, VGPMX lost a significant amount of value: 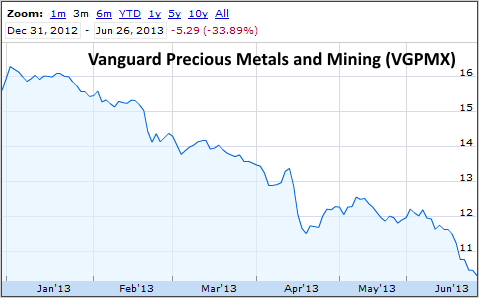 You should always consider selling for tax loss harvesting any positions with significant losses in taxable accounts.Assuming you want to keep an allocation invested in the position, you can either sell the first position, wait 31 days and then buy it back, or you can buy a position (doubling up) and then sell the original position after 31 days. You must wait 30 days in order to avoid a “wash sale” in which you will not be able to take the loss off on your taxes.

None of this matters in IRA accounts. In an IRA account there is no reason to sell these types of positions. Just because VGPMX dropped recently as the markets rose does not mean the position isn’t doing what it was intended to do in the asset allocation.

Investors often mistakenly believe that the recent direction of a stock, fund or index is some indicator of its future movement. In fact the exact opposite is usually true as born out by several studies. Read our recent comments, “The Driver Of Future Behavior” for more on that subject. VGPMX has changed direction recently as well.

Here is the appreciation in VGPMX during the third quarter of 2013 so far: 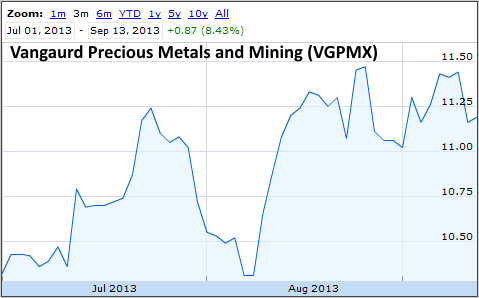 Currently we allocate about 16% of our resource stock allocation to precious metals and mining. That results in only about 3%  of the total portfolio being allocated to precious metals and mining. This is a very small allocation which is intended to take some of the edge off when the markets are dropping. It is also intended as an inflation hedge. And it is intended to help when there is sever trouble in the world.

It is a small investment which you should expect to be volatile and relatively disappointing when the markets are doing well.

Subscribe and receive the free presentation: If Not Gold, Then What?!