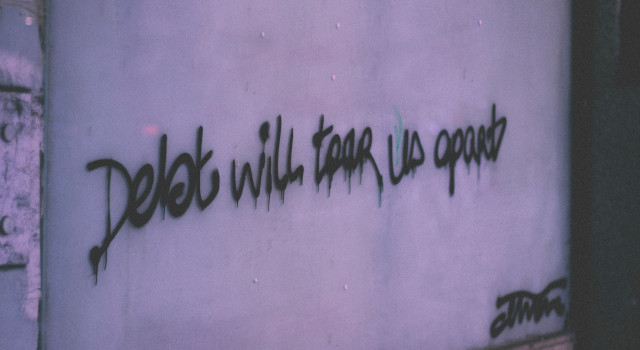 They say that as long as Americans keep spending, the economy will be strong and unemployment will remain low. Some make the case that, “Spend now and pay later” is a good national economic policy. Regardless, it is certainly a poor personal policy.

Debt is bad. Debt is good only when accompanied by a positive income stream that more than offsets your interest payments. If you, like many, have been spending your mortgage refinance money to meet monthly expenses you are stewing in bad debt.

Household debt currently totals $8.2 trillion (of which home loans account for $5.8 trillion) and that is up from less than $3 trillion in 1991. Consumers tapping surging home prices through wave after wave of cash-out mortgage refinancing have turned their homes into veritable “borrow and spend” ATM machines. Refinancing has totaled $2.5 trillion over the past two years; and home equity loans now stand at about $800 billion.

Today, the average household personal debt is $84,454. The household debt service ratio (DSR) has risen to 13.32% of disposable personal income vs. 10.96% just a decade ago. DSR is an estimate of the ratio of debt payments on outstanding mortgage and consumer debt to disposable personal income. The average American credit card user carries more than $8,000 debt today versus $3,000 in 1990. As a result of all this debt, bankruptcies hit a new record last year with 1.6 million personal filings.

The 2.36% difference in debt service makes a large difference in family wealth. Reducing your DSR by 2.36% over a 45 year working career invested in the stock market would produce almost six times your ending salary and fund one quarter of your retirement.

As a result of growing debt, the American Dream today is more leveraged than at any time over the past half-century. However, consumers continue to spend. Consumption by Americans as a percentage of Gross Domestic Product has reached 70%, which is the highest of any nation. This spending has been largely fueled by equity extraction from real estate and mortgage refinancing and not by wage growth.

It would be nice if the United States could really cure our economic problems by spending our way to prosperity. It almost seems possible as a country. It would certainly be easier than tightening our belts and living within our means.

During the past few years, frugality has almost been equated with being unpatriotic. Nothing could be further from the truth. Spending beyond your means brings misery, poverty and bankruptcy. The truly rich person is anyone whose income is greater than his or her expenses and whose expenses are sufficient to their desires.

Perhaps what we need is more traditional moral philosophy and less Keynesian economics! The wisdom of Solomon is given us in Proverbs 22:7, “The rich rules over the poor, And the borrower becomes the lender’s slave.”

You are in financial slavery if any of the follow symptoms describes you:

Debt leads to the emotional turmoil of anxiety, worry, and frustration. It stresses family relationships and causes you to blame and resent others for your problems. And it preoccupies your soul with the means of life rather than life itself.

The only two ways out of debt are bankruptcy and frugality. Frugality is preferable. As Thomas Jefferson said before he went bankrupt, “I place economy among the first and most important virtues, and debt as the greatest of dangers to be feared.”

Photo by Ruth Enyedi on Unsplash