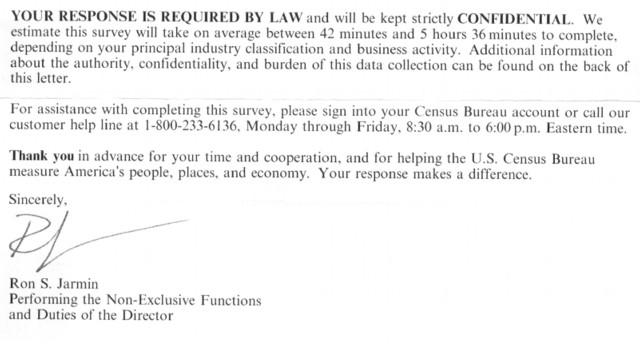 I recently received a letter from the United States Department of Commerce requiring that I complete the 2017 Economic Census. This letter came with a large bold “YOUR RESPONSE IS REQUIRED BY LAW” notice along with a 5 week deadline for compliance. It also warned, “We estimate this survey will take on average between 42 minutes and 5 hours 36 minutes to complete.

The burden reminds me of the Soviet Gulag corrective labor camps. Only a small percentage of the Soviet Union’s population ever experienced the camps and so there was little sympathy for the burden that the prisoner’s experienced. It wasn’t until Aleksandr Solzhenitsyn published One Day in the Life of Ivan Denisovich that the experience of Stalinist repression was openly distributed.

Perhaps we need more articles chronicling the governmental burden laid on small business owners. This latest 2017 Economic Census is a requirement for me to spend few hours of my time as a data-entry clerk for the Department of Commerce’s Economics and Statistics Administration. I called the number that they provided and they refuse to offer a paper version of the census because “this saves money for the Census Bureau.” Not complying is also not allowed. And since the survey is a massive number of linearly presented online questions, when you hit a question that you do not understand or do not know the answer to, you have to pause the survey and go research the answer.

Government bureaucrats inevitably get carried away with the questions they add to required surveys. Most of it is none of their business. As I have written before:

If you want to know what complying with government data collection requirements is like, try keeping a budget to the penny; a food diary to the calorie; a travel log to the tenth of a mile; a record of your face-to-face associations showing time, place, and duration; and a time and motion study of your work day to the minute each with supporting documentation. Then, imagine the violation of your privacy if you were required to report that information to the government each month.

Advocates of governmental surveys suggest that if they were voluntary you would just get bad data. The truth is that you get bad data anyway.

And if you want to know how useless such surveys feel to a business owner, take two rolls of 100 pennies and throw them into your yard. Then spend the next 5 hours and 36 minutes gathering them or until you find at least 98 pennies.

All of this work is predicated on those who believe that such data is essential to our economy. Nothing is further from the truth. Free market economics works best without centralized knowledge or centralized planning.

In the article “Centralized Planning Requires Omniscience” I outlined at least five reasons why such required surveys do more harm than good. They are invasive, personal, and proprietary.

When I called the customer help line I was offered that if I did not want to enter the information online they could have someone call me and take my information over the phone. Or, the Census Bureau might decide that it wasn’t worth their time and effort and just waive collecting my information.