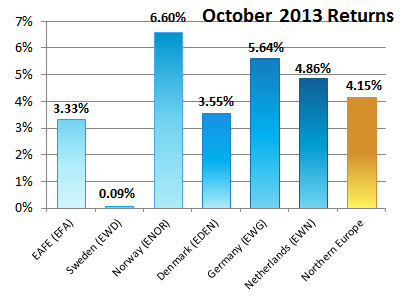 October saw the Northern European Countries on average beating the EAFE Index again. This month it was 0.82% having lagged in August and September by 0.42% and 1.15% respectively.

July, however, saw these same Northern European countries beating the EAFE Index by 3.8%. They also outperformed the EAFE Index during the second quarter of 2013.

Again, boosting asset allocation returns by selecting specific countries is often the best 7 out of 12 months. October was one of the 7.