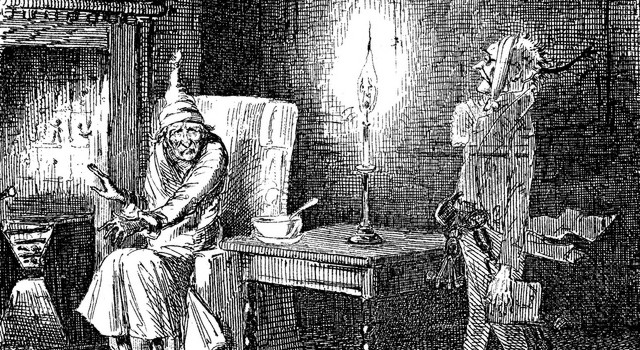 “Marley was dead.” That’s how Charles Dickens’s A Christmas Carol begins. Jacob Marley, dead exactly seven years to the day, is the real ghost in the story. We see Ebenezer Scrooge’s life in light of his partner’s death. Although the way the two men approached their finances may seem identical, when we take a closer look, subtle but important distinctions emerge.

In his book Why Smart People Do Stupid Things with Money , Bert Whitehead describes different financial personalities. He depicts a “miser” as someone who is strongly motivated by fear but has a natural inclination to save.

Whitehead maps financial personality on two different scales. The first measures people’s tendency toward greed or fear. As a miser, Marley is motivated by fear (low risk acceptance), whereas his longtime partner Scrooge tends much more toward greed (high risk acceptance). The second scale measures an individual’s tendency to save or spend. Here both Marley and Scrooge are practiced savers.

When two portly gentlemen stop by Scrooge’s office soliciting charitable donations, they discover that Marley has been dead for seven years. One comments, “We have no doubt that Marley’s liberality is well represented by his surviving partner.” The narrative continues, “It certainly was; for they had been two kindred spirits.”

Liberality cannot come from someone who is personally fearful. Distrust drives out emotions like tenderness and compassion. Scrooge confirms this condition in Marley as he looks through his ghostly form and remembers ironically that it was said of Marley he had no bowels. Marley had no empathy for others because he was too anxious for himself.

To Americans celebrating a traditional credit card Christmas, the distinction between a scrooge and a miser may seem insignificant. Both types are cold skinflints who don’t spend money to make merry at Christmas. Although their tendency toward frugality may match, however, their investment philosophies do not.

“Misers,” Whitehead writes, “are champion savers, but they have little to show for it. They are fearful about investments, even straightforward ones that are simple to explain and understand. At the most extreme, these are the people who keep all their money in a mattress or cans buried in the backyard. More commonly, people with miser-like tendencies hoard their money in bank accounts and Treasury bills.”

Unlike scrooges, misers are fearful, a trait they share with Whitehead’s other personalities, bon vivants and spendthrifts. All three types worry there won’t be enough money. Spendthrifts spend it before it’s gone; bon vivants spend it, but only on themselves; and misers hoard it in case they need it later. However because risk and return often go together, playing safe generally does not lead to building real wealth. Wealth is not just what you save; genuine wealth grows from what you save and invest.

Marley may have been a good man of business, but Scrooge was such an opportunist that on the day of his partner’s death he “solemnised it with an undoubted bargain.”

Scrooge lives in Marley’s former chambers. But where Marley saw security, Scrooge envisions opportunity. Scrooge stays in three of the rooms and rents out the others, both above and below his quarters, as offices. He even leases the cellar to a wine merchant.

Misers like Marley don’t like to take any such chances. They prefer investments that are touted as secure and come with guarantees. For example, fear often motivates misers to buy life insurance as an investment. Salespeople tout the safety of their company and switch fluidly between guaranteed returns and rosier projections or illustrations.

Misers also buy annuities, which they believe are tax shelters or will guarantee an income for life. With immediate annuities, misers can be so enamored by the annual lifetime return of 6%, they fail to notice the guaranteed 100% immediate loss of their principal. They also generally don’t factor in the incredible drag of inflation and the devaluing of the dollar.

It can take a while before misers understand the long-term effects of their actions. They can be shocked to find their financial institution bankrupt, their ultimate taxes higher than necessary and their cumulative return less than savings bonds.

Misers may sleep well tonight, but they won’t eat well in 20 years. They are relieved not to have been invested over the past 14 months, although balanced portfolios have shown gains. They are especially glad not to be invested in emerging markets, even though that’s the asset class with the highest gains. They are content earning less than 2% while the government devalues the dollar with inflationary spending.

Not taking any risks is a recipe for long-term regret. Some risks are worth taking in life, including calculated financial risks. The danger of a miser’s long-term regret is easily avoidable. The solution, of course, is financial education.

There are many worthy long-term investments. But misers worry that much of the financial world is just trying to part them from their money. They need someone who sits on their side of the table to teach them. Misers have learned to love saving their money. Now they just need to learn to love investing. And misers can be very quick learners.

A second regret of misers, and the true moral of Dickens’s story, is saving money without any purpose. Marley dies having translated very little of his money into anything of value. Dying having spent the smallest amount is even more meaningless than dying with the most. At least Scrooge invested his money. And after seven years he had probably doubled it.

Perhaps one reason why misers are tightfisted is because they haven’t learned how to handle investments. They can’t share from an abundance of wealth because they’ve been too cautious in handling their finances to afford such largess.

Neither Scrooge nor Marley ever asked what the money was for. Marley held on to his out of fear of not having enough. In contrast, Scrooge saved and invested, so he was more able to look beyond his counting house when the spirits haunted him. Marley, looking back on his life, was the first to warn Scrooge, “The dealings of my trade were but a drop of water in the comprehensive ocean of my business!”

We might well feel sorry for Marley. He did nothing wrong. He just wanted to be left alone. His sins were of omission, not commission. To paraphrase the words of the Book of Common Prayer, it wasn’t that he did the things he ought not to have done. It was that he left undone the things he should have done.

As Jesus preached, Marley was like “the one who received the seed that fell among the thorns . . . who hears the word, but the worries of this life and the deceitfulness of wealth choke it, making it unfruitful” (Matthew 13:22).

Marley wanted to be left alone to deal with his business. But after death he laments, “Mankind was my business. The common welfare was my business: charity, mercy forbearance, and benevolence, were all my business.” Marley saved money but never understood why.

Failing to ask what the money was for left Marley in death with “No rest, no peace. Incessant torture of remorse.” And time matters for both investments and our lives. In the long run, we all will be gone from this life, so we must make the most of time, both for our investments and for our lives. The two, it turns out, are inexplicably intertwined. Our wealth is just a placeholder for what we value.

Marley tells Scrooge bluntly in the first chapter of the book, “Any Christian spirit working kindly in its little sphere, whatever it may be, will find its mortal life too short for its vast means of usefulness.” And in the final chapter, Scrooge has learned the lesson and found the joy it brings. Having found his affections changed, he finds that “everything could yield him pleasure.”

Work kindly in whatever sphere God has placed you. Know what the money is for. And remember Marley’s admonition: “No space of regret can make amends for one life’s opportunities misused!”