Obama does not need to wait for an act of Congress before he starts eliminating or trimming wherever he thinks cuts could be made. He has had the power to do so for the past two and a half years. Instead, he seems bent on continuing to accelerate toward the debt ceiling as quickly as possible. I’ve never found a better way of changing behavior than the shock of paying cash for everything you buy.

Asking to go further into debt is not “compromise.” The only debate should be what needs to be cut.

About 40% of US government spending relies on borrowed money. It is not healthy to our economic growth. If the debt ceiling is reached, my prediction two years ago is still accurate:

If the debt ceiling is reached, the consequences will be large but not entirely harmful. The dollar will strengthen. The interest rate you get paid for your money will sharply rise. The stock market will drop simply because it will take fewer dollars now that they are more valuable to buy a share of stock. Prices will drop for the same reason.

All the dire consequences of not raising the debt ceiling pale in comparison with the dangers of continuing to add to our deficit. I’m certain that partisan forces will push for the worst possible consequences if a deal is not reached, but I’m hopeful that the average American will not be snookered.

Just to be clear: The stock market will drop, if for no other reason than that the dollar will strengthen. Dollars which are not being constantly devalued by government easing of the money supply are worth more and it will take fewer of them to buy the same number of shares. Stocks will fall when measured in dollars even if their value has the same purchasing power.

For liberal readers, I recommend this article by Nate Silver from the New York Times FiveThirtyEight, entitled “What Is Driving Growth in Government Spending?” which reads in part:

It’s one of the most fundamental political questions of our time: What’s driving the growth in government spending? And it has a relatively straightforward answer: first and foremost, spending on health care through Medicare and Medicaid, and other major social insurance and entitlement programs. … 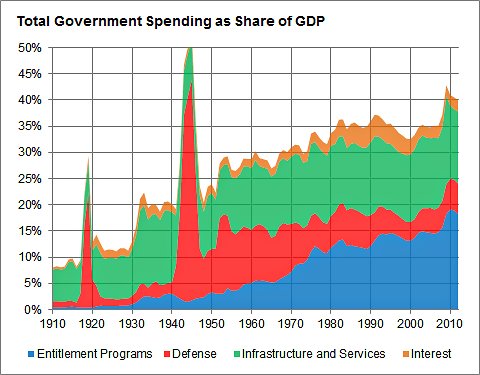 … Nevertheless, the declining level of trust in government since the 1970s is a fairly close mirror for the growth in spending on social insurance as a share of the gross domestic product and of overall government expenditures. We may have gone from conceiving of government as an entity that builds roads, dams and airports, provides shared services like schooling, policing and national parks, and wages wars, into the world’s largest insurance broker.

Most of us don’t much care for our insurance broker.

The Affordable Care Act moves us away from fiscal restraint. Flowing money through government control makes everything more, not less expensive. And it may be worth a government shut down or hitting a debt ceiling if that is what it takes to solve these more systemic issues about the growing cost of entitlements and income redistribution.

Spending, Debt and Deficit as a percentage of GDP continue to grow unchecked. What political process will ever stop them from bankrupting our country?