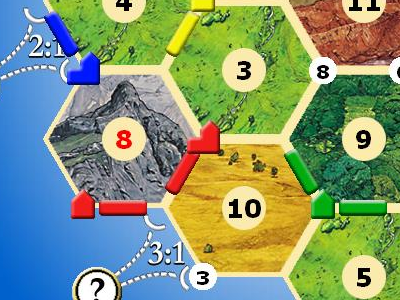 I’ve loved games all my life. Mostly I enjoy analyzing the game design and learning what makes a winning strategy. Profound lessons can be learned from the best of these games. And the principles you learn can help you succeed for the rest of your life.

Take the “The Settlers of Catan” board game designed by Klaus Teuber. Like all great games, it has simple mechanics, but because the layout of the board is random, each game is unique and requires its own strategies.

Players start with two settlements, acquire resources, build more roads and settlements and upgrade their settlements to cities. Each settlement is worth 1 point; cities are worth 2. Players can gain 2 extra points by having the longest road or by buying development cards and getting the largest number of soldiers. Some development cards are also simply worth an extra point. The first player to get 10 points wins the game.

Players acquire resources (brick, lumber, wool, grain and ore) as two dice are rolled. Each hex represents one resource and has a dice number from 2 to 12. Players build their settlements and cities on the points where three hexes meet and receive resources when any of these three numbers are rolled. They receive one resource card for a settlement and two for each city.

What makes Catan particularly interesting is that just producing the most resources is not sufficient to win the game. You must have a different combination of resources to build a road or settlement, upgrade to a city or buy a development card. If you are missing one type of card, you do have the option of trading four cards that are identical to the bank to receive one of any other resource card. Having a fistful of the wrong cards is often not as good as having one of the cards you need.

One of the downsides of Catan is that sometimes the game is won or lost by the selection of the very first two settlements. And after a poor selection, it may take another hour of play for the player with the wiser placement to prevail. Thinking an hour ahead may seem impossible, but the same foresight is required for 30-year retirement projections as well.

About five different strategies can prevail in a Catan game depending on the frequency of resources on the board and the placement of trading privileges. I’m going to describe the one most frequently available and easiest to use to help you win games consistently. Even if you have never played Catan, the lesson is having the foresight to know what resources you need to accomplish each goal on the way to 10 victory points.

Each player starts the game with two settlements and two roads. Roads require one brick and one wood. We need to build just two more roads for our strategy. Most players assume that because they must build a road initially, they need to have a lot of wood and brick. But thinking through which strategy you are trying to use to get to 10 points shows this may not be the case.

Our winning strategy will be to build two roads and then two additional settlements. Each settlement requires four cards, one each of brick, lumber, wool and grain. Then we will upgrade each settlement to a city. To upgrade a settlement to a city requires three ore and two grain. We will need to upgrade four times. Four cities will give us 8 victory points, and we will get our final 2 victory points by getting three soldiers to take the largest army. Soldiers are one of the types of development cards. We should be able to get three soldiers if we buy three to five development cards. Each development card costs three resource cards, one each of wool, wheat and ore.

Knowing what mix of resources you need to meet your objectives is critical. My favorite strategy requires mostly ore and wheat. Setting out to win with the longest road requires mostly brick and lumber.

Most players simply try to maximize their numbers of cards regardless of the type of resource. Perhaps they have an abundance of wool and brick, but nothing can be built with wool and brick. As a result they need three or four times as many cards as the player who ultimately wins. You must keep your goal in mind as you make your first moves because they cannot be undone.

In my favorite strategy your first placement should be to maximize ore with a secondary resource of wheat. If the third choice is ore, wheat or wool, so much the better. Point your roads toward the outer edge of the board so other players won’t block your building. You are only going to build one additional road for each of your settlements, so it is not very important what lies beyond one road away. While you are waiting to trade for the brick and lumber to build those roads, you can be upgrading your settlements or buying development cards.

If the cards you buy are not soldiers, they may help you by allowing you to build roads or collect two of any resource you want. Because your strategy involves buying development cards, you may overcome any weaknesses in your placement by the cards you purchase.

Like Catan, the best games teach us principles in less than an hour that life teaches us much more painfully over years of calendar time. Having made your first settlement placement incorrectly in Catan, you have to endure another uncomfortable hour as your opponents outperform you. Locking up your investments, your vocation or your life on a path that won’t meet your goals is a serious misfortune that is in your power to avoid. It simply requires analyzing the mechanics of the game and your goals before making your first moves.