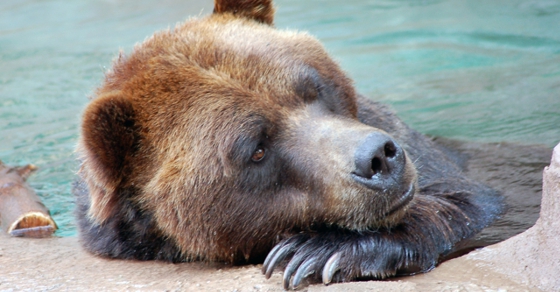 A Bear Market is defined as an index dropping at least 20% from a previous high. Since 1950, there have been exactly nine Bear Markets in the S&P 500 Price Index, which is what most people mean by “the market”. Only one of these dropped over 50%, turning into a stock market crash. Although you might think that Bear Markets are uncommon, the S&P 500 Price Index spends 18.19% of the time with losses of 20% or greater from some previous high.

Examining past Bear Markets can help provide some context when we experience another.

The market continued its upward trend for only an additional 10.4 months. This subsequent Bull Market was shorter than average. From the bottom of the Bear Market, it rose 73.53% to peak 32 months (2.6 years) later on 1/11/1973. During this recovery from the bottom, the markets experienced an annualized return of 23.31%. 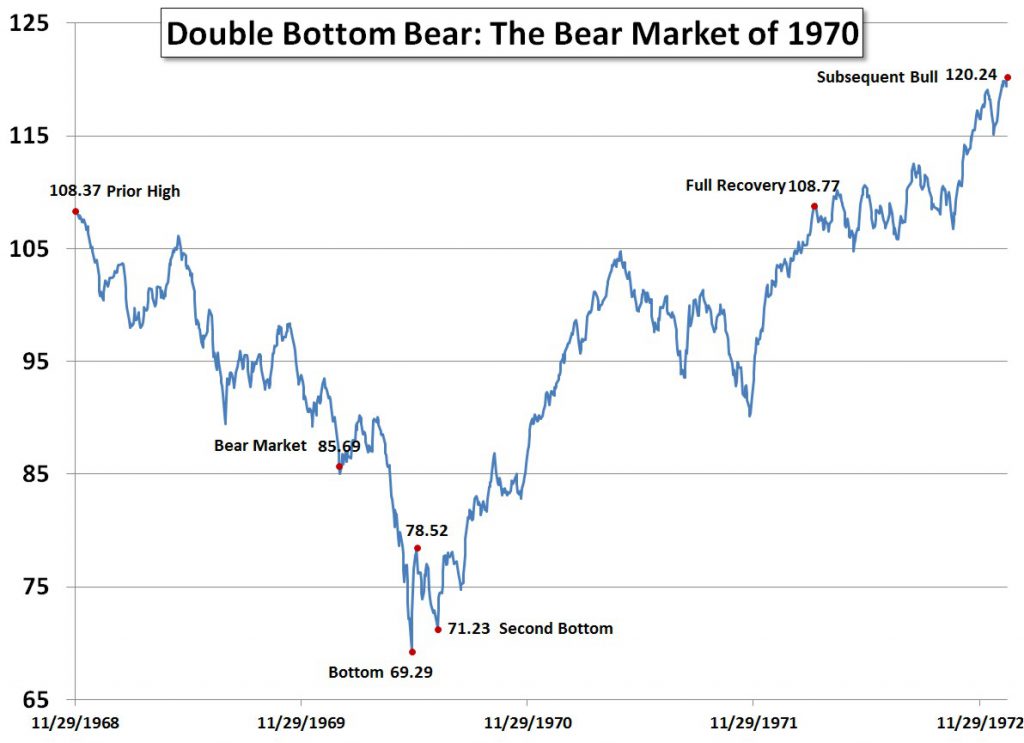 Here are 3 lessons which can be learned from this Bear Market:

2. Bear Markets aren’t always well behaved. The Double Bottom Bear market of 1970 was typical from peak to trough back to full recovery (3.3 years), but it formed two bottoms and after its full recovery hovered around that value for months, ultimately only rising 10.55% beyond it. Every Bear market is different.

3. There is no one cause of a Bear Market. This stock market descent was, like nearly all periods of American and world history, filled with momentous events such as Richard Nixon’s election to the Presidency, the Boeing 747 making its first flight, the Football War, Apollo 11 landing on the moon, the Chappaquiddick incident, the Manson murders, Woodstock, Unix being first developed, the first Scooby-Doo episode being broadcast, the Weathermen’s Days of Rage in Chicago, the Moratorium demonstrations to End the War in Vietnam, the first Sesame Street broadcast, ARPANET (the precursor to the Internet), the first United State’s military draft since World War 2, The Beatles’s breakup, HIV virus first spreading to the United States, the My Lai Massacre, the first Earth Day, Apollo 13‘s oxygen tank exploding, and the Kent State shootings.

Although the year and a half of a dropping market was filled with history, none of these events could be said to have caused the market’s drop. The subsequent market recovery was just as packed with troublesome events. The market’s performance is less connected to world events than the financial news makes out, which means most brokers that promise to be able to predict movements and get ahead of bubbles or busts are just plain wrong.

4. There is also no one cause of a recovery. On August 15, 1971 (during the recovery), President Nixon announced that he was freezing all prices and wages throughout the United States for 90 days. He was supported by 75% of the country and did not lift the controls until after winning a landslide reelection. This ultimately proved disastrous and Nixon’s Keynesian economics stood for years as an example of how price controls don’t work . Nixon also removed the gold standard for the dollar, ending the Bretton Woods system. By the time Nixon left office, inflation was 11 percent. Trying to “fix” the market is futile. It drops and recovers due to complex factors.

Each Bear Market is unique. But since we experience one every 7.2 years, they should be considered normal and planned for accordingly.

Instead of trying to manipulate the market or your investments, it is wiser to craft a diversified portfolio. Rebalancing back to such a portfolio is the best way to weather a Bear Market and to capture the gain from its recovery. The market’s volatility is what makes it a good long-term savings vehicle.

Those who are saving should continue to save throughout a Bear Market. And those who are withdrawing from their portfolios should have 5-7 years of safe spending invested in stable fixed income securities. Bear Markets are unpredictable, but there is no reason that they should be a cause of distress.