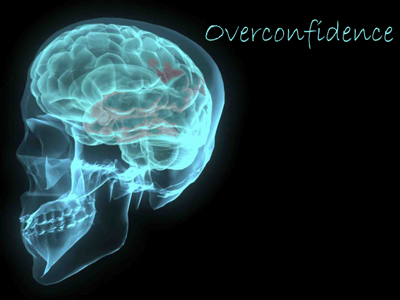 Before we really understand something, we may either lack confidence or express overconfidence. A common type of overconfidence stems from inexperience. For instance, more than 70% of naive investors wrongly assume they are enjoying above-average returns.

Part of the problem is certainly overconfidence. Research studies indicate that a majority of members of any group will rate themselves above average on a given task. But part of the difficulty may also be what people value in the task.

For example, 82% of students rate themselves in the top 30% of safe drivers. Some new drivers define the quality of their performance by how many accidents they’ve had. Others use speeding tickets as a measure. And sadly, some young adults consider themselves safe drivers because they can execute trick maneuvers drunk while doing 100 miles an hour. Inexperience often breeds overconfidence.

According to behavioral finance studies, overconfident investors trade more and earn less than those who opt for a buy-and-hold strategy. These brash investors time the market poorly, all the while assuming they’re doing better than average. They maintain this delusion by selectively forgetting how they believed all the misleading and confusing indicators that falsely predicted certain outcomes were inevitable. If the outcome happens months later at half what they predicted, they still say, “I told you so.” Without calculating an accurate time-weighted return each month, they assume their own brilliance.

We tell stories so we will remember experiences, not forget them. We say, “I don’t want to talk about it” because that helps us forget. In investing, we recount our winners and prefer not to talk about our mistakes. This tendency is universal even if we are only reviewing our investment decisions in the confines of our own minds. Thus without a rigorous review methodology, how we remember trumps what actually happened.

Certainly a little overconfidence is better than a lack of confidence. Because the markets on average go up, an emotional bias that keeps us invested helps us earn better returns. Overconfidence that causes us to underperform the market by 2% annually still translates into reaping quite satisfying returns. Therefore overconfidence only becomes dangerous when we can’t conceive of failing.

A demotivational poster available at despair.com, entitled “Overconfidence,” pictures two downhill skiers trying to outrun an avalanche. The caption reads, “Before you attempt to beat the odds, be sure you could survive the odds beating you.” That’s sage advice.

Deadly overconfidence causes us to break one or all of these five rules of investing humility:

1. Don’t borrow money to buy stocks. The markets are inherently volatile, and your investment strategy must be able to survive a prolonged downturn. If you have purchased stocks by heavily margining your account, you will experience a margin call when your investments drop in value. Being forced to sell equities when the markets are down is a surefire way to lock in losses and lose your shirt. Many options and other investment derivatives also leverage your investments and increase the potential for disaster.

Here’s a humbler approach: Err on the side of caution and keep a portion of your portfolio in cash or fixed income. “Keep some dry powder” is the maxim. Having cash to buy back into stocks after a market correction both boosts as well as smooths your investment returns. And thanks to the effect of compounding, smoother returns produce better returns.

2. Diversify. Even if you are right nine out of ten times, if you always bet the farm, then one mistake will lose everything. No matter how confident you are, plan on doing OK even if you are wrong. Diversification means you will always have something to complain about. But it also means you won’t make more than half a mistake.

Many investors make their fortunes through a few lucky picks and mistakenly believe they can maintain their wealth the same way. Easy come, easy go. Especially if you got rich by being lucky, you need to wise up and realize you don’t know it all. Find an asset allocation that will survive the next 30 years.

When the correlation between two investments rises, the value of diversifying between them diminishes. Stay alert about events that always appear more unlikely based on historical statistics than they actually are. Past performance always underestimates the actual volatility. Because it is often these unknowns that pose the real risk, take precautions that help protect you no matter what the disaster may be.

4. Keep short-term spending safe. Maintain a cash emergency fund that can provide three months of spending. Keep another three months’ worth in safe fixed-income investments. During retirement, keep the next five to seven years of spending in fixed income. This strategy allows you to put the remainder of your portfolio in the markets and survive the inherent volatility.

5. Lean toward indexed investing. Select funds with low expense ratios based on an index that follows the asset class you are investing in. Even using index funds, you may end up with a few dozen funds, but each should provide a low-cost way of investing in that asset class.

Low-expense passive index investing has been receiving a growing percentage of investment dollars. This suggests that investor overconfidence in beating the market is decreasing. Investors have learned that just achieving a good market return is sufficient to achieve their goals.

Self-diagnosing investment overconfidence is nearly impossible. It’s safe to say that if you are invested as much as you should be, you are likely overconfident. You are probably losing a few percentage points to this overconfidence, but because you aren’t keeping track of your time-weighted return, you remain blissfully unaware.

A quarterly review of your portfolio for the five rules of investment humility just described can help you avoid a world of hurt. Brokers and agents don’t have a fiduciary duty to act in your best interest. Visit the National Association of Personal Financial Advisors (www.napfa.org) to find a fee-only advisor in your area.