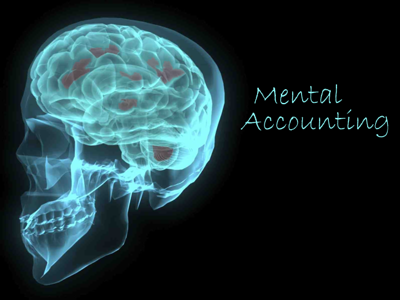 The essence of successful financial planning is using your money to meet your life’s goals. In the process, one dollar is as good as another, but curiously our minds do not perceive it that way. We tend to fall prey to the fallacy that behavioral finance calls mental accounting, commonly known as the “two-pocket” theory of money. We treat money differently depending on its source.

It is as though we put earned income in one mental pocket and money we did not expect in another. Studies show we are much more willing to spend money impulsively out of this second pocket.

Our supposedly rational mind objects to mixing the money from the two different pockets. But our minds are tricking us because dollars are completely interchangeable.

To clarify, we are not talking about budgeting. Earmarking dollars for vacation, big-ticket purchases, house payments, college savings and toward retirement is clearly positive and very much encouraged. This type of positive mental accounting aligns perfectly with meeting your financial goals.

But the type of mental accounting that gets us in trouble is what happens when the way we acquired a dollar causes us to ignore our careful planning and spend it differently.

Imagine a university graduate student who budgets enough for rent and food and hopes to save $500 every month, but her take-home pay is only $1,500. Then she sells her textbooks at the end of the semester and finds herself with an extra $250. Rather than putting the additional $250 toward savings, she indulges in luxury items until she’s sure she has spent all the money.

Put yourself in this student’s situation. In your mind, it is as though you have $1,500 in one pocket where you put serious earned money and stick to your budget. In the other pocket, you put the $250, which you now regard as play money, and rationalize that you should only use it to make frivolous purchases.

Most of us find this tendency so strong and irresistible, we would all do well to find ways to forestall the impulsive spending that slows progress toward achieving our financial goals. Allocating your money to meet your needs and desires is an important step in the financial planning process. But first you must gather all the money available in a single pool and allocate it according to your family’s priorities. The source of the money shouldn’t matter. When it does, we cause ourselves unneeded harm.

Studies show that gamblers rarely leave the casino as winners. The reason is not simply because the house has an edge on every game. Mental accounting is also the problem. Gamblers consider their winnings as house money and reason that they can keep on gambling for free. So most gamblers only stop playing when they are losing.

This propensity is the hope behind the recent stimulus checks Americans received from the government. The rebate was designed to be a relatively small amount, $1,800 for a family of four. Even when people say they plan to use the rebate to pay down debt, they are already engaging in mental accounting, thinking of the money differently simply because of the source.

In polls, Americans claim they will spend only 18% to 40% of the rebate. But if we tracked their actual spending, mental accounting would have badly misled them.

Perhaps they will pay off some of their debt or put money into their 401(k). But most Americans will jump at the chance that they have some extra money to justify a purchase they would not otherwise have made. And they will probably do it more than once.

In fact, studies suggest that average consumers will spend an astonishing additional $4,500 in relatively small purchases simply because they received a $1,800 check: extra money on eating out, electronic toys, and large appliances. Children may be given their $300 as though it somehow belongs to them, and husbands and wives may rationalize using the money as an excuse to make that purchase their partner considers unnecessary. Past research supports the prediction that consumers will spend 250% of their rebate check without even realizing it.

Even the most rational of us who receive money this way spend more as a result. The psychology behind this thinking is so strong, we can safely assume we are all influenced by it.

Thus found money, the green stuff we do not earn or save, is easily spent, wasted, and risked. Most lottery winners are broke or worse within five years of their win. Unfortunately, winning encourages the worst tendencies of those with the temperament to play the lottery in the first place.

Although mental accounting is described as the two-pocket theory of money, I propose adding a third pocket. Earned income is linked to planned purchases in one pocket. Some money is gained unexpectedly and too often provokes impulse spending in the second. But in the third pocket, we could put automatic income, that is, money gained from investment interest, dividends and appreciation. Mental accounting often leaves this third pocket in an investment account to compound and appreciate, helping us reach our long-term goals.

If you get and spend an extra $1,000, you will need $23,000 more in retirement to support your increased lifestyle. You can spend your way into financial troubles, but you can never make your troubles worse by saving.

Another error of mental accounting is to differentiate between income and appreciation. If one stock trades at $100 per share paying a $6 dividend, it’s equivalent to another stock that pays no dividend whose share price rises from $100 to $106 per share. Some people mistakenly think the dividend-paying stock is better during retirement and the appreciating stock is better when you are younger.

The real difference between dividend-paying stocks and appreciating stocks is in the type of company. A company with little growth potential, such as a utility, pays its profits out to shareholders in dividends. A different company, perhaps a restaurant with ambitions to open branches across the country, uses its profits to expand. As it does so, it generates more profits from more locations, which drives the share price up. Both types of companies provide portfolio returns that you can spend in retirement.

If you struggle with self-control, only taking the dividends allows you to limit your withdrawals. But it may also cause you to adjust your asset allocation to maximize dividends, putting all of your net worth in one type of investment.

The biggest mistake occurs when people believe they need interest and dividends to generate cash in retirement. As a result they put too great a percentage of their portfolio into fixed-income bonds and do not invest enough in stocks that will keep up with inflation and provide appreciation for the end of their retirement.

The source of your money, whether from interest, yield (dividends) or capital appreciation should not matter.

Part of the emotional push toward using a two-pocket theory of money may stem either from an effort to be disciplined or a failure to do so. In general, people both want to enjoy the money now and also plan for the future. This dilemma between a short-term and long-term focus requires a measure of discipline and willpower that most people don’t have. So they fudge by feeling guilty about using hard-earned money frivolously but fall prey to using easily received money quite carelessly.

There is an upside, however. You can use mental accounting to your advantage by using that third pocket of money and automating as much of your savings as possible. People tend not to count money that is automatically deducted from their paycheck as money they can spend. Increasing the amount you have withdrawn in your 401(k) or 403(b) account is an easy way to use the third pocket to your advantage.

It is also just as painless to have money transferred regularly from your checking account into an investment account. This automatic savings puts money into a mental accounting third pocket from which it is very difficult to spend emotionally. Add to this account any money you receive unexpectedly, and you will be well on the way to securing a successful retirement.