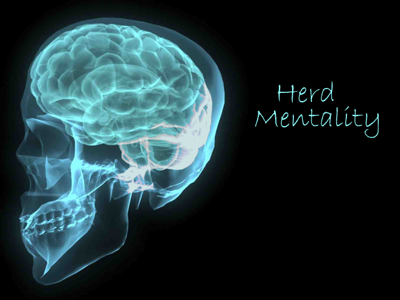 One of the early studies on herd mentality was the Solomon Asch experiments in the 1950s. The setup was a mock vision test. In reality, all but one of the participants were actors, who after a few correct answers started agreeing unanimously on a wrong choice.

In a control group, participants had no trouble answering correctly. But participants waffled when a group of three or more people who preceded them confidently selected a different answer. Three out of four responded incorrectly to at least one question. In the end, participants answered incorrectly about 37% of the time.

First we must acknowledge that the phenomenon of the herd mentality can be useful in many situations. For example, computer simulations show that even when only 5% of the animals in a herd know the location of the watering hole, the entire herd is able to find it. In nature, keeping the number of leaders low helps minimize those who are put at risk. People use these instincts every day as they leave theaters and navigate crowded streets.

Although the herd mentality may help you find greener pastures if you are a bison, it won’t help you find untrampled pastures. In investments, every bison ahead of you has already run the price up, and the only buyers of your investment are behind you. Straggling along at the back of the herd doesn’t stop you from reaching the watering hole, but being toward the end of a run-up in the markets can be as deadly as drinking from fouled water.

In the original Asch experiments, those who were persuaded to give wrong answers used two different sets of reasoning. One group believed that everyone was trying to give the right answer and they had somehow fallen victim to an optical illusion. The assumption that three presumably honest people are correct and you must be wrong could help you avoid some mistakes. The herd mentality can keep you from wandering off into the desert seeking to drink from a mirage.

The other group gave the wrong answer knowing it was wrong simply because it wasn’t worth giving a different answer. Every time they broke the pattern of giving the same answer as everyone else, the cadence would stop and the entire group would look at them. They suspected that everyone else was wrong, but they saw no harm in going along and agreeing anyway. This is how the herd mentality can help your social life.

Even though a herd mentality can be useful in some situations, equity markets isn’t one of them. In the markets, the herd effect benefits those at the front of the herd who can sell their place at the watering hole to those at the tail end before too many bison have fouled the water. Being at the tail end of the herd produces regret as the herd moves on, leaving you in a trampled field. But to avoid the pitfalls of this herd instinct in your investments, you need knowledge and conviction as well as an awareness of when you are susceptible to the influence of the herd.

In the original study, at least three actors were required to achieve this herd effect, and they had to be unified. If even one person gave the correct answer, it provided a role model for defiance and the herd effect was reduced. People seemed to need permission to disagree with the herd.

I give you permission to disagree with the herd.

Major news sources move markets just by their tone of optimism or pessimism. The financial news often focuses on daily price movements, and like all sports trivia, it tends to emphasize winning or losing streaks.

Stock prices can move on very low volume if it is all in one direction. Even when the vast majority of those who hold stocks continue to hold them, if even a few investors are motivated to buy or sell, the price moves significantly.

In the long term, the markets are brilliant at setting appropriate stock prices. In the short term, though, they have the IQ of a gnat. The markets offer so much inherent opportunity that even conservative investors get swayed by the siren songs of greed or fear. The strait between Scylla and Charybdis is a narrow path safely navigated only if you have a nymph like Thetis to guide you.

In the financial world, your Thetis is a long-term investment strategy and the discipline to purposefully avoid moving in one direction. Not following the crowd describes a contrarian perfectly. And the cornerstone of that role is rebalancing your portfolio regularly.

You are happy with your investment in A, but you still aren’t sure about B. All the financial news is about A’s stellar returns, how the industry is booming, and why A’s products are essential to life on this planet. The news also reports the slump in Category B. No one is buying their products. They are laying off employees, firing CEOs, and facing a wall of pending indictments and lawsuits.

To make matters worse, your neighbor to the right works in Category A, and his 30% investment returns is all he can talk about. Your brother-in-law is dumping all of his investments in B and adding to his investment in A. So you call your financial advisor and ask if you should make some adjustments in your asset allocation as well.

“Yes,” answers your financial advisor, “sell $7,500 of A and invest that in B.” You are stunned. You wonder if your investment advisor is so stubbornly enamored by B that she won’t admit her mistake and insists on pouring more of your investment gains down the drain.

Although you are not convinced by this so-called strategy, you decide to give it another try. So you sell some of A and buy more B. Now you have $57,500 invested in each.

Fortunes change. The layoffs and new leadership in B return profitability and the industry begins to recover. Stock prices, beaten down because of losses, rebound from their lows, and B gains 30% the second year.

Meanwhile, A’s growth falters. Stock prices had been driven up from new investments and were pricing the company for 30% annual growth. When the industry of A only experiences 15% growth, however, the stock prices falter and appreciation ceases. Despite 15% growth, current stock valuations are barely justified and drift sideways for a 0% gain for the year.

Your brother-in-law and your neighbor to the right are tight-lipped.

Your neighbor to the left, however, is ecstatic. He works for a company in B. Not only is his company doing better, his investment made a 30% return this past year!

You are satisfied but not ecstatic. You’ve never gotten a 30% return. You meet with your investment advisor and ask her, “If you knew B was going to do well, why didn’t we put all the money in that category?”

“I didn’t know B would do well,” your advisor admits. “But when a good category falls out of favor with investors, rebalancing your portfolio is automatically a contrarian investment. Your portfolio returned 15% the first year and 15% the second year. Unlike your neighbors, the second year’s gains compounded with the first year’s gains produced a total gain of 32.5%.”

You are amazed. The simple contrarian act of pulling money out of the investment that was the darling of the industry and investing it in the dogs of the industry boosted your two-year returns by 2.5%. Not only did your investments do better than your neighbors did, but you avoided the feast or famine volatility inherent in their approach.

As a financial advisor, I can often predict which category will perform the best over the next year just by observing the reluctance of new clients to invest in that category. A savvy Rothschild banker once gave this “contrary” advice: “Buy when there is blood on the street and sell on the sound of the trumpet.”

It’s tough being a contrarian, but investing in trampled on categories is too critical for your investment returns to let emotions or the herd mentality block your success.