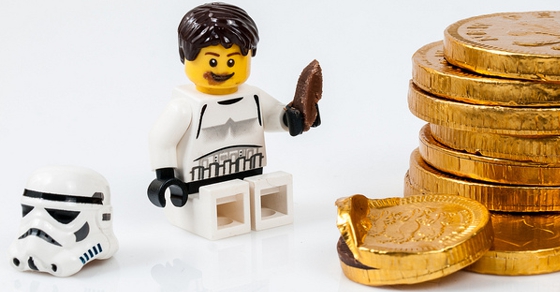 Every year, I make time to read the Berkshire Hathaway annual report and every year, it is time well spent. If you can measure the confidence of a man by his ability to share his failures, Buffett is not lacking for either. Beyond the typical business analysis and common sense advice, this year’s annual letter was a special one because it marks the 50th anniversary of Berkshire Hathaway.

Buffett and his partner, Charlie Munger, both took the opportunity to reflect on the first 50 years at Berkshire Hathaway and outline the defining elements that have led to Berkshire’s success. These elements can be boiled down to not overpaying for companies with healthy culture and strong managers. And then giving them autonomy to do what they do best.

For me, this years’ golden nugget goes to Buffett’s definition of risk. Buffet writes:

Over the long term, however, currency-denominated instruments are riskier investments – far riskier investments – than widely-diversified stock portfolios that are bought over time and that are owned in a manner invoking only token fees and commissions… If the investor, instead, fears price volatility, erroneously viewing it as a measure of risk, he may, ironically, end up doing some very risky things. Recall, if you will, the pundits who six years ago bemoaned falling stock prices and advised investing in “safe” Treasury bills or bank certificates of deposit.

Is Buffett really saying that stock portfolios are safer than bond portfolios? Yes, but only if you share his long-term investing time horizon.

In the short run, risk is volatility — particularly the volatility that brings your accounts into negative territory. I have never met anyone who loses sleep over upward volatility. But as your time horizon increases, momentary ups and downs lose their edge as trends emerge. Over the long run, risk is better defined as the likelihood that you’ll be depressed when you realize how poorly your investments have performed after inflation.

For example, investing in FDIC insured CD’s appears very safe for a short term investor but this safety begins to erode after you adjust these returns for inflation.

The blue line looks safe but the red line shows the reality that CD’s have lost money since 2009 when you adjust for inflation. And this was during a period of historically low inflation. Extending your time horizon paints an even bleaker picture for so-called safe haven investments as Jeremy Siegel has illustrated in his book, Stocks for the Long Run. 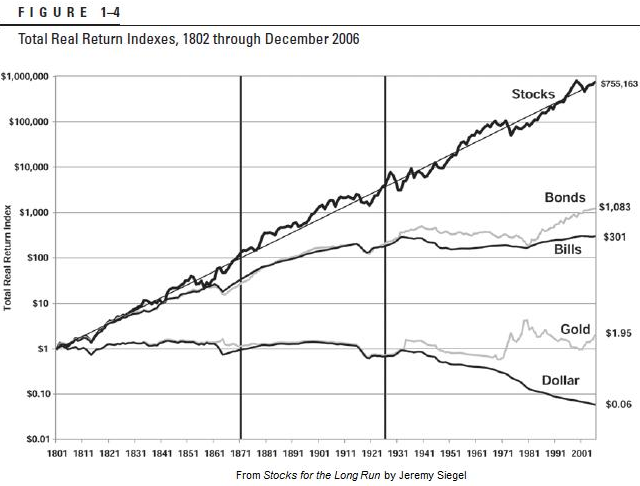 Which of these lines looks the safest to you? After adjusting for inflation, a dollar invested in gold grew to $1.95 over 200 years and just $301.00 in Treasury Bills. Alternatively, it grew to $755,163 if it were invested in the stock market.

But Buffett insists that you need to be savvy when you invest in stocks. He states in the golden nugget above that they must be “owned in a manner invoking only token fees and commissions.” Too many financial salesmen are pushing high cost investment strategies that consume an unreasonable portion of the gains the market offers. To illustrate a better path forward, Buffett recommends that everyone read The Little Book of Common Sense Investing, written by Jack Bogle, a founding father of low-cost index investing. Anything by Jack Bogle is also a favorite ours.