InvestmentNews magazine, an otherwise excellent weekly publication, often has its cover wrapped in a paid advertisement. The October 1-5, 2018 issue was wrapped in an advertisement featuring an older gentleman rollerskating with the large graphic claim of ” 7% WITHDRAWAL @ AGE 65* “. 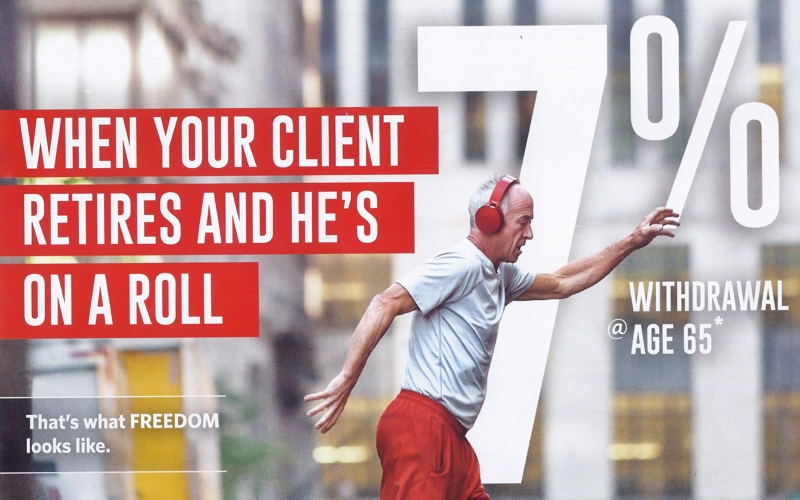 Without even doing the research, you should know to walk away from it simply because it is “too good to be true.”

I would assume that a 7% withdrawal rate at age 65 means that if I had $1 million at age 65 I could safely start spending a lifestyle of $70,000 a year (7%) and safely continue that standard of living for the next 30 years. That is what was meant by the original 4% withdrawal rate rule and what we mean by a “safe withdrawal rate.”

In other financial planning literature, when a percentage is given as a withdrawal rate it is assumed that you can immediately begin annually spending that portion of your assets and adjust upwards for inflation each year. It is also common sense that a “withdrawal at age 65” means you are going to be withdrawing money starting at age 65.

The advertisement appeared to be as misleading as possible.

Instead, the Transamerica variable annuity product contained this disclaimer under the ironic heading of “STRAIGHTFORWARD WITHDRAWAL RATES”:

Opportunity for up to 7% single life withdrawal rates at age 65, after waiting 6 living benefit years when no withdrawals are taken, that won’t be reduced even if the policy value goes to zero.*

Now I confess that I am not sure that I have understood all of their so-called straightforward withdrawal rate. I suspect the reality is even worse than I am assuming. I don’t understand, for example, why the phrase “up to” has been put in front of 7%. And I am not 100% certain that I have understood “living benefit years” correctly.

What I do know is that six years of no withdrawals is huge. Inflation averages 4.1% historically. And equity investments, on average grow at a rate of 6.5% over inflation.

In terms of purchasing power, I would say that this is a pitiful withdrawal rate which will continue to dwindle by inflation each year. We believe there are many amazing alternatives to annuities.

This ad is misleading enough that I would call it fraudulent. In addition to all of the other reasons people hate annuities, seemingly fraudulent advertising and sales techniques is a major factor. Why would you trust someone posing as a financial advisor and then purposefully misleading you?