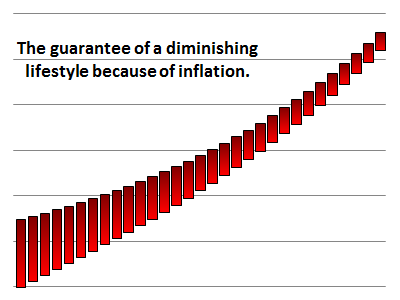 Ever-popular annuities sometimes sound too good to be true, which in itself is probably a good reason to avoid them.

An annuity is a financial product sold as a way to collect and grow funds and then later receive those funds as a steady cash flow during retirement. Annuities have many flavors and features that vary this basic principle, but the basic terms you will hear are “deferred or immediate” and “fixed or variable.”

A deferred annuity puts off taking withdrawals, whereas with an immediate annuity you can take withdrawals right away. A fixed annuity has a preset withdrawal amount that does not adjust for inflation. A variable annuity is tied to the performance of some investment choices.

Commission-based advisors with insurance licenses can sell you whatever form of annuity would have performed well over the past decade. They say they are fee-based, at least partly to sound more like fee-only financial planners. If you are confused by these distinctions, then 93% of the financial services world who can’t call themselves fee-only are doing their jobs well. You do well when you remember that fee-based is not the same as fee-only.

Let’s review the math behind an immediate fixed annuity. This type of annuity receives a fair amount of seemingly scholarly press trying to justify including this product as part of a balanced portfolio.

Imagine that Thomas and Martha Jefferson, ages 64 and 62, respectively, purchase an immediate annuity that will pay them a guaranteed 6% annual return. If they have $500,000, they would receive $30,000 every year for the rest of their lives. This income, added to their Social Security, would comprise the spending for their lifestyle.

This scenario sounds fair. After all, who wouldn’t want to have earned 6% over the last 10 years during these mixed markets? Earning 6% guaranteed feels like a good exchange for the uncertainty of the markets. But it is not. Here’s why.

First, the S&P 500’s return over the past 10 years was 6.34%. So even in some of the worst markets in recent history, the return of the S&P 500 was better than the perceived return of this guaranteed annuity.

Second, the annuity does not have a 6% return, even if the Jeffersons lived forever. Buying an annuity begins with the immediate loss of 100% of your original investment. So for the first 15 years, the annuity company is simply giving you back your original purchase price. The way most salespeople describe thinking about the annuity discourages investors from realizing that their original money is gone forever. They do this by referring to it as an investment. I would not call it an investment because after you purchase an annuity, your principal no longer has any value.

The entire selling point of the annuity is a lower return in exchange for a guarantee. But when analyzed, the purchase price is a loss you can never recover from. We can analyze this annuity purchase like an investment and calculate an internal rate of return (IRR). For the first 15 years, the IRR is 0% because the annuity company simply hands you back your own money.

Third, immediate annuities are not indexed for inflation. Part of their appeal is having at least some stream of guaranteed spendable income, but guaranteed to buy what? This annuity quote is for a fixed payment of $30,000. The payment is fixed in dollars whose buying power diminishes by inflation every year.

According to the government consumer price index (CPI), $5,081 in 1970 had the same buying power as $30,000 today. Imagine thinking you had your future retirement needs guaranteed in 1970 by buying an immediate annuity paying $5,081. An annuity is supposed to be longevity insurance. But now at 104 years old, you are trying to live off a sixth of what you needed when you began your retirement.

The only real guarantee of an annuity is a diminishing lifestyle because of inflation. We use 4.5% as an average inflation rate. By the time Martha is 85 years old, inflation will have reduced the buying power of the annuity from $30,000 to less than $11,000.

Annuities offer too much income to spend early in retirement only to keep that number constant and offer too little later in life. This math error is part of their mistaken appeal to the public. We would suggest that the safe spending rate for a couple with $500,000 is only 4.17% at age 62. This would limit their annual safe spending to $20,850.

But with an appropriate asset allocation and this rate of spending, the Jeffersons would have a good chance most years to enjoy an increase in their spending allowance greater than inflation as their assets appreciated. And any unused assets could be left as an inheritance for their heirs.

We don’t recommend an allocation to annuities for any portion of your portfolio. We believe an age-appropriate allocation to bonds provides a similar boost to the likelihood you will have sufficient assets in retirement. We suggest allocating five to seven years of safe spending in stable investments with the remainder in appreciating assets.

Coupled with staying within an age-appropriate safe spending rate, this strategy provides the best balance between sleeping well tonight and eating well in 10 years.