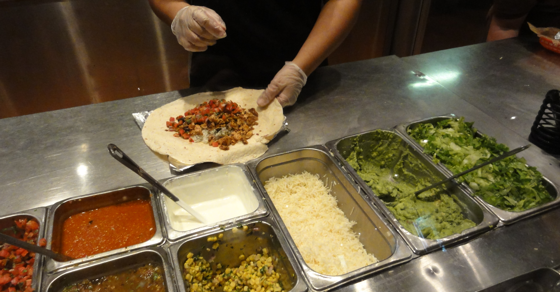 The marketing people at Chipotle Mexican Grill have a new promotional idea called “cultivating thought.” They invited selected authors to write something designed to be read in two minutes. These pieces are printed on the sides of Chipotle takeout bags as well as drink cups.

Although these works may never reach the New York Times bestseller list, they may actually be read by the quarter of a billion customers who order at Chipotle every year. These quotes are provocative, not only for what they say, but for what they say about us as Americans. Chipotle must believe these ideas are mainstream enough that they will enhance their image among their target audience.

Recently we received a Chipotle bag with an essay entitled “A Two-Minute Note to the Future” by George Saunders. The large-font quote pulled from the essay and placed on the opposing side of the bag was the story’s concluding sentence: “Hope that, in the future all is well, everyone eats free, no one must work, all just sit around feeling love for one another.”

It is intriguing for a Chipotle bag to suggest everyone should eat for free. One of the first principles of economics is that there is no such thing as a free lunch. Chipotle seems to understand this concept because it grosses $3.21 billion per year. The average lunch at Chipotle costs $11.

And yet their bag cultivates the thought that we should all be hoping for the day when no one has to pay.

Presumably in this future, we will have universal lunch coverage. Chipotle will simply be reimbursed by the federal government that will serve as the single-pay universal food provider. Lunches will cost the taxpayers $27.50, but poor people will be subsidized 50% to make the lunch affordable for them.

And apparently in this future, no one needs to work to feed everyone for free. But why would Chipotle support that belief? They employ 45,200 people and certainly don’t want to hire people who are asking the question, “Do I have to work?” Chipotle advertises that they are looking for ambitious, contentious, motivated, hospitable, high-energy, infectiously enthusiastic people.

A quick glance at their website and you know the restaurant chain takes great pride in their work and their employees. They write, “Chipotle is full of employees who have achieved more than they ever thought possible.” That achievement comes from challenge and stress that is just as healthy as the food they serve.

It’s just like in financial planning where a too precipitous retirement, a sudden and complete cessation of work, usually results in accelerated decline and death. As Booker T. Washington wrote in “Up from Slavery,” “Hard work should not be avoided but sought out because it is hard work that makes the soul honest.”

Think of health and wellness, both spiritually and physically, like your muscles. Stress and exercise lead to improvement. As Nassim Taleb suggests in his book “The Bed of Procrustes,” “Don’t talk about ‘progress’ in terms of longevity, safety or comfort before comparing zoo animals to those in the wilderness.”

Zoo animals eat free and don’t have to work. They just sit around feeling love for one another. And they die young. All is certainly not well. The best zoos can prolong the lives of the animals by creating ways for them to work for their food. They introduce stress into their lives to keep them healthy.

At the San Francisco Zoo, for example, the zookeepers hide the gorillas’ food all around their enclosure, scattering it across the ground, trees and bushes, making the apes spend the whole afternoon hunting for it.

The question is why author Saunders as well as Chipotle would think their target audience would like the idea of living like zoo animals. It seems to fly in the face of Chipotle’s marketing, where they say their employees enjoy “a career that is totally fulfilling, fun, and financially rewarding beyond anything they thought possible.”

Another question we might ask about the Saunders quote is why the highest calling is feeling love for one another. What about actually showing love to one another?

For individuals with a utopian vision, pure intentions are more important than good actions or positive results. But good intentions can have disastrous results, and what is best for people is rarely easy. Sometimes those who feel the most love actually do the most harm.

Perhaps if Chipotle could not find quotes extolling the virtues and importance of work and achievement, it would have been better to say nothing at all.

Jonathan Safran Foer, the inventor and self-described curator of this idea, reported to Vanity Fair that “Chipotle refrained from meddling in the editorial process. . . . I selected the writers, and insofar as there was any editing, I did it.”

Foer offers insight into his selection process, suggesting we not ask the question “Is this going to change the world?” but rather just the question, “Is this better than having a blank bag?”

Perhaps going forward they will balance their utopian authors with someone from a different perspective. Meanwhile, Saunders’s story that belittles the value of real work and undermines Chipotle’s mission as an employer was and is probably best left off the bag.