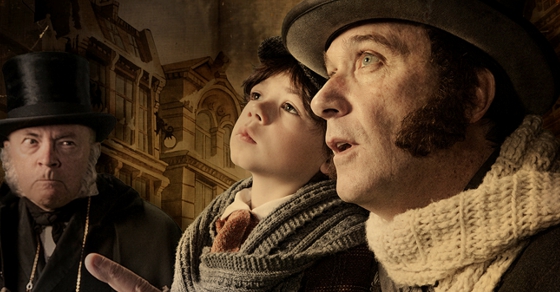 Christmas is a time for oft told tales like Charles Dickens’s “A Christmas Carol.” At first glance, this story fills us with pity for the Cratchit family, always struggling to make ends meet. Poor Bob Cratchit is forced to work for Ebenezer Scrooge, whose personality makes an easy target for the cause of Bob’s financial troubles. But, the true source of the Cratchits’ poverty is not Scrooge but Bob’s own impulse to live a lifestyle worthy of the Lord Mayor himself.

Bob Cratchit is a clerk and a member of the British middle class. He lives a genteel life. He goes to work with a coat and tie on. His family lives in a four-room house and has a much easier working existence than most of Victorian England. Bob Cratchit earns more than an ample wage.

His salary, we are told, is fifteen shillings a week. The British pound was divided into twenty shillings, and each shilling was divided into twelve pennies or pence. So, Bob Cratchit makes 15 shillings or 180 pence each week-about the wage of a metropolitan police officer and well above the truly needy.

Essays of the Victorian era included titles such as, “How to live on eight shillings a week.” The Cratchit’s daughter, Martha, is apprenticed to a milliner and earns additional income. And Peter, their eldest son, is about to obtain a job earning five shillings and six pence weekly. He, too, is to be a man of business.

So why is the Cratchit family so poor?

Spendthrifts are some of the most pleasant people to be around. They are socially outgoing and often demonstrate their own friendliness by buying things for other people.

For Bob Cratchit, living within a budget and saving money would be like setting out to deprive yourself and suffer. Spendthrifts live for the pleasure of the moment. Eating out or buying clothes are viewed as immediate pleasures for relatively small amounts of money. They do not realize that the purpose of budgeting and saving is to make sure they are spending money on the things they really want instead of frittering it away.

On Christmas Eve, Mr. Scrooge has brought his banker’s book home with him to review all evening. Shopaholics, on the other hand, almost never keep any records of their purchases. But, records would show the Cratchit family that Bob’s spending habits are exposing his family to want and suffering.

The Cratchits buy a beautiful goose and then admired it for its cheapness. Spendthrifts typically go bankrupt saving money. We are not told what Bob paid for his Christmas goose, but stories of the day suggest that a goose conservatively cost about 400 pence (1.5 Pounds). At this amount, the Cratchit family goose is costing the family a year’s supply of medical attention for the entire family.

Many spendthrifts justify their purchases as “investments.” They often buy jewelry, clothes, or even fancy house wares as an investment to provide themselves an excuse to gain the trappings of a richer lifestyle. This purposeful self-deception shows the depth of a typical spendthrift’s denial. An investment is something which pays you money, not an article of clothing.

But the Cratchit family are typical spendthrifts when it comes to clothing. On Christmas day, Bob Cratchit confers on his son Peter a shirt in honor of his apprenticeship. It was common in the day for the rich to go through the Parks to show off their finery. And Peter is amazed to find himself so gallantly attired that he too is anxious to show off his fashionable new linen in the park.

Even Mrs. Cratchit is described as “brave in ribbons, which are cheap and make a goodly show for sixpence.” Making a good show is important for spendthrifts. Mrs. Cratchit’s ribbons cost about two to three weeks of medical attention for the entire family. Their second daughter, Belinda, is also brave in ribbons too-another three weeks of medical attention.

The Cratchit family is clearly living beyond their means.

While Bob Cratchit fears poverty, he also resents wealth. He is caught in the consumerism of the rising Victorian social and professional class. It is this propensity to spend that is the true cause of the Cratchit family’s lack of means.

The tendency toward over-consumption and immediate gratification isn’t limited to Victorian England. It is nearly the defining character traits of our baby-boomer generation. Like the Cratchit family, our generation has a tendency to blame financial troubles on the more productive members of society.

Scrooge has earned the financial means necessary to help the Cratchit family, but the Spirits don’t always give us a reformed Scrooge to bail us out of our financial problems. Sometimes they want us to become a reformed Cratchit! Perhaps this is why the Spirits visited Ebenezer? It was easier to make a frugal man generous than it was to make a spendthrift father financially responsible.

Bert Whitehead at the end of his section on shopaholics writes, “Before accepting a client whom I know is a severe shopaholic, I require them to begin intensive psychotherapy with a qualified professional.” That sounds even worse than being haunted by Christmas Spirits!