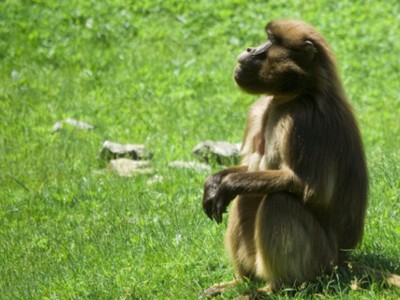 Last week I wrote, “How are foreign stocks doing compared to stocks in the United States? Fall 2012” in which I wrote:

It is interesting to see that U.S. stocks under-performed the countries with economic freedom as well as some of the better European countries. Emerging markets, however, did not perform as well as it usually does.

My analysis last week was intended to show that since 5/31/2012 foreign stocks have been outperforming the United States, especially countries with the most economic freedom. Which leaves the question, “Why invest in the emerging markets?” The short list of reasons to invest in emerging markets are these:

1. Emerging markets have a higher return on average. 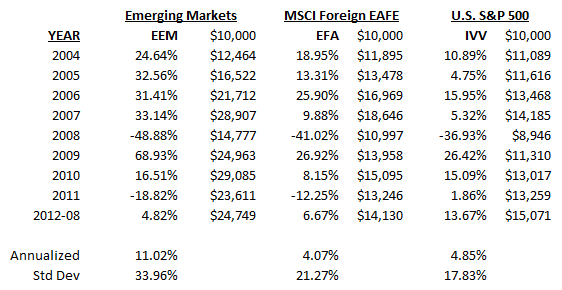 The primary reason emerging markets gets higher average returns is because they have lower labor costs.

You can also see that that year and this year emerging markets has under performed developed nations. The temptation is to let these short term fluctuations ruin a brilliant long term strategy. Emerging markets are extremely volatile (as you can see from the 33.96% standard deviation) but the higher the volatility the greater the rebalancing bonus.

To put it in the words of another advisor, “Risk and return go together. You’ve experienced the risk, now do you want to stick around for the return?”

2. Emerging Markets have a lower correlation with other investments

These correlations are higher than normal because of the financial crisis in 2008 when what moved was the value of a dollar and everything denominated in dollars therefore moved in sync. But you can still see that investments within the foreign stock asset class have higher correlations than assets in other asset classes.

And lower correlations means that having a portion of your portfolio in emerging markets could boost returns without adding a lot to the volatility of the overall portfolio.

Emerging markets have less debt in relation to their gross domestic product (GDP). This is partly because their GDP has been growing. Given developed countries with high debt and deficit, it may be safer to invest in countries without that burden.

For those who look at the returns of emerging markets in 2011 and the early part of 2012 they might miss the relative relationships recently. Past trends are no indication of future returns but recent trends are often missed when looking at losses since purchases a year or more ago. My post last week was intended to address someone who said they didn’t see any indication that foreign stocks would do better than the United States when in fact they had for the past three months. 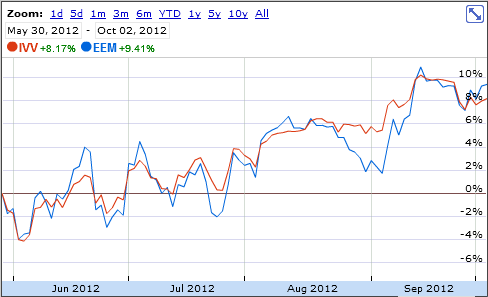 5. Reversion to the mean

Reversion to the mean means that on average returns stabilize to their historical averages. This is another way of saying that when stock prices drop often the forward P/E ratio (Price per forward earnings) drops as well. This is often an indicator of better forward returns.

Again, the scatter plot of possible returns means that this is not an indicator that should do anything more than suggest where the rebalancing bonus comes from. It comes from prices gyrating more wildly than earnings would suggest it should. Currently the forward P/E ratio for MSCI Emerging Markets is 9.61. Since these change regularly these links will have different values even a month after this article is published.

None of this means you should put your entire portfolio in emerging markets. Asset allocation favors a more balanced approach.

For a typical 40-year old you might put 36.2% in foreign stocks. And we might recommend putting 25% of that into emerging markets.

That would mean putting just 9.05% of the entire portfolio in emerging markets.