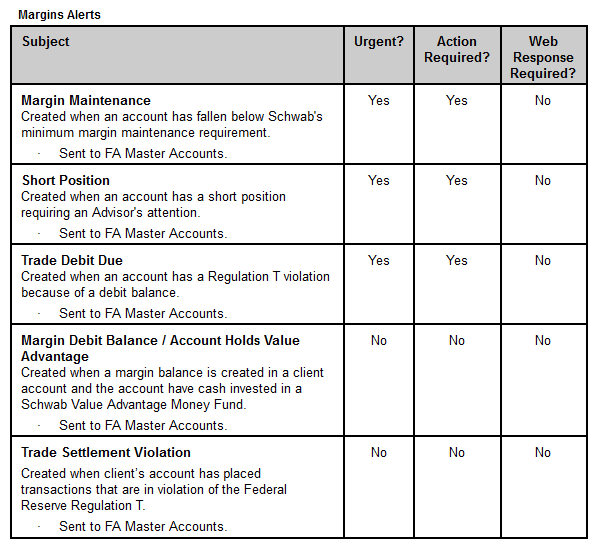 Three of the types of margin alerts are urgent and require an action to be taken in order to remedy the situation. Two them are less urgent, and may or may not require any action to be taken. Perhaps later I will expand this blog post to explain all five of them, but right now I am just going to explain what a Trade Settlement Violation is and how it might happen.

Example #1: At noon you sell an Exchange Traded Fund (ETF) and buy a mutual fund.

Mutual fund trades at Schwab must be entered before 4pm. Any trades entered after 4pm are not executed until the next day. Mutual funds take 1 day to “settle” and then you either receive the cash for a sale or the cash is due for a purchase.

Exchange Traded Funds (ETFs) and stocks are entered during the day. They take 3 business days to settle.

Selling a mutual fund and buying an ETF also works fine. The cash from the mutual fund arrives in one day and the cash for the purchase of the ETF is not due until the third day. The reverse, however, does not work.

If you sell an ETF and buy a mutual fund today it does not work. The money for the mutual fund is due tomorrow, but the money from the ETF sale is not settled and available until it settles in three business days.

Example #2: You buy a ETF today, and tomorrow sell a mutual fund to cover the costs.

Also, you are not allowed to buy an ETF today and sell a mutual fund tomorrow to cover the costs. Even though the settlement dates work,they work by accident. If Schwab had one day settlement for everything it would clearly be a violation. Taking advantage of settlement dates is not allowed. They don’t want you to owe money for a day without having generated the funds cover it.

Most mutual fund trades must be entered before 4pm or else they are not executed until the next day. Several years ago there was a big scandal as some brokerage firms were allowing mutual fund trades made after 4pm to be entered. They were settled at the 4pm price which allowed unscrupulous trades to be made based on what the global markets had done after hours and yet they would still get the 4pm price. They would move massive amounts in or out of mutual funds after learning what had transpired after hours.

Several changes were made as a result of this scandal. First, most of the mutual funds now have a short term redemption fee of 2% if the fund is held less than 90 days. (The exact fee and the exact holding period varies some.) The second change is that funds were strictly held to the 4pm deadline.

Vanguard took a different approach. Vanguard mutual fund trades at Schwab must be entered before 3pm. I believe this gives time for Schwab to transfer the fund purchase and redemption trades to Vanguard before the 4pm deadline. But it causes problems for trades made withing the 3pm to 4pm window.

It also means that even a sale of a Vanguard mutual fund and the buy of an ETF results in a violation. The ETF purchase is made today and the money is not officially needed until +3 days. The sale of the Vanguard mutual fund misses the 3pm submission deadline and isn’t executed until tomorrow (+1 day). The money from the sales settles the second day (+2 days). And the money is available to cover the ETF purchase in plenty of time when it is needed on the third business day.

What happens with a “Trade Settlement Violation”?

Schwab allows three trade settlement violations in an account in a 12 month period before any action is taken.

Yes, that is 3 violations in a single account in a 12 month period. That would be a lot of trading mistakes before any action is taken.

The action, if it were to be taken, is to restrict the account to “cash up front.” This means that they would require the cash from sales to settle before they would allow the purchases. It would mean you would not be able to buy and sell two different mutual fund on the same day if you did not have cash available for the buy. You would have to sell one fund today and purchase the other fund tomorrow when the cash was available.

All of these margin alerts are part of cash management, the process of trying to stay appropriately invested when you are buying, selling, making deposits and making withdrawals.

We all make errors. Hopefully this blog post explains how the errors happen, what the consequences could be, and what to do in order to correct them.