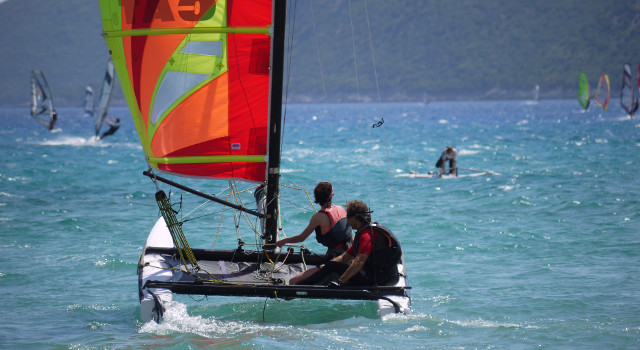 The S&P 500 over the past six months is up over 40%. You have had smooth sailing and are beginning to feel comfortable again. Don’t. It’s time to tack once more and rebalance your accounts.

Studies show that rebalancing your portfolio can boost your returns by as much as 1.6% annually. This rebalancing bonus is measurable but by no means guaranteed. It works best in choppy volatile markets with asset classes that don’t move in sync with one another.

It is always a contrarian move, expecting the wind to change. But when it does, rebalancing can fill your sails again. However if the market continues moving in the same direction, there can be a rebalancing penalty. The past year has been a little of both.

Imagine your portfolio as a catamaran with twin hulls. One pontoon is invested in the S&P 500 and the other in the bond index.

At the end of February at the bottom of the markets, your sailboat was down 19.00% and one pontoon was riding way out of the water. You have 64% invested in bonds and only 36% left in stocks. Without rebalancing, your portfolio has grown more conservative just when a more aggressive stance would be advantageous. By the end of the year your portfolio is only 5.28% underwater, and the imbalance is less pronounced at 57/43.

During the first six months, the markets were dropping precipitously and the stock pontoon was getting lighter by the day. Rebalancing means moving some funds from the relatively heavier bond side to the lighter stock side now riding high out of the water. As long as the stock side continues to lighten, moving more money in hurts returns. Rebalancing also seemed like madness, at least until the end of February when the markets bottomed.

Then after February, the markets began to rise and the bond side became comparatively lighter. Rebalancing in rising markets means you can begin to take some of those profits back off the table. Continually taking money out of equities while they get heavier again dampens returns slightly.

Yet because the markets changed course at least once at the end of February, rebalancing tended to improve returns. Doing so every month boosted them by a meager 0.15%. Had there been more reversals as a mix of positive and negative months, this rebalancing bonus would have been higher.

Monthly rebalancing isn’t usually the best strategy. It is better to let the trend continue for a while and rebalance less frequently when the market is making new highs or lows.

If you were brilliant and rebalanced your portfolio after six months just once at the end of February, you only lost 1.08%. This move would have resulted in a 4.20% bonus over the negative 5.28% return of a buy-and-hold strategy.

Rebalancing requires discipline. You set a target asset allocation for your investments and then periodically buy and sell different investments to stay focused on your objective. Without rebalancing, those categories that do well may continue to grow as a percentage of your portfolio until they significantly underperform the markets. The ones that do the best often bubble and finally burst. Rebalancing avoids this needless anguish.

Portfolio construction begins with the most basic allocation between investments that offer a greater chance of appreciation (stocks) and those that provide portfolio stability (bonds). Decisions made at this level are the most critical in determining the course of your portfolio.

Even if you are creating a very aggressive portfolio, including some fixed-income investments actually increases returns. This strategy can keep your portfolio from capsizing. Stable investments provide some cash on the sidelines to buy stocks after a market correction, which both boosts as well as evens out your investment returns. Thanks to the effect of compounding, smoother returns produce better returns.

Periodic rebalancing is the simplest and most common method. Waiting for an asset category to exceed some threshold and then bringing the allocation back within some tolerances seems to produce slightly better returns and lower volatility. Although different ways of rebalancing can produce somewhat variable results, committing to a regular rebalancing plan is more important than the method you use.

Portfolios naturally grow out of balance as the wind and waves buffet your investments. Doing nothing risks keeling too much as one pontoon grows inordinately heavy and the other light. This hands-off stance risks capsizing an otherwise brilliant investment strategy. So given everything that has occurred in the markets, now is a good time to rebalance your portfolio.

Photo by Brett Jordan on Unsplash