You might think the Joint Economic Committee would be a good picture of bipartisan harmony. It is “joint” in two senses: not only does it have 10 Democratic and 10 Republican members, but it is bicameral, with 10 members from the House of Representatives and 10 from the Senate. Furthermore, it is “economic,” focused on a hard-mathematics that transcends partisanship. And lastly, it is a “committee;” you would expect some sort of group cooperation.

But then, the first thing greeting you upon visiting their website is a splash page: Would you like to see the Republican version of the website, or the Democratic one? 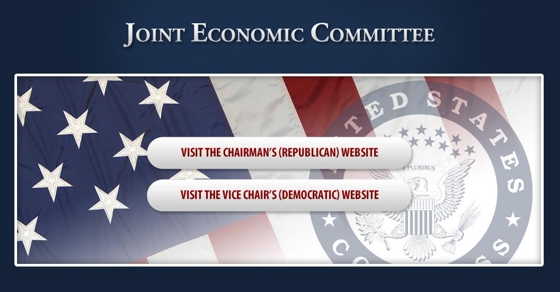 Apparently, the public isn’t supposed to interact with a committee, let alone a joint one. This is politics; there are two diametrically opposed bodies in this joint committee and you need to pick a side.

Worse, many old links forward to this landing page instead of the original article. As a result, when looking for objective, nonpartisan economic analysis, you are asked to take a side. And that old article you were looking for? You’ve got to find it yourself.

So let’s take a look at the (Republican) Chairman’s page. 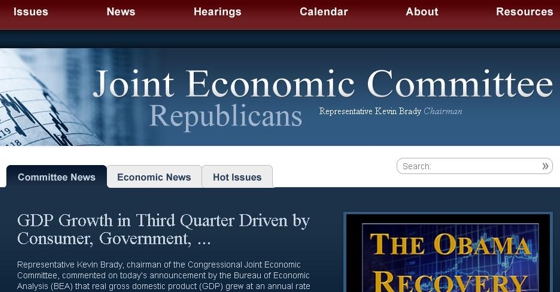 The header prominently displays “Joint Economic Committee, Republicans” and the URL reads www.jec.senate.gov/republicans, lest you forget whose side you’re on now. The header row starts with “Issues” and a list of topics is also printed on the right sidebar for easy navigation of topics – actually, quite helpful for researchers like myself.

The (Democratic) Vice Chair’s page has some marked differences. It displays “United States Congress” in the header with the Congressional logo and makes no mention that it is the Democratic page, unlike the Republican version. 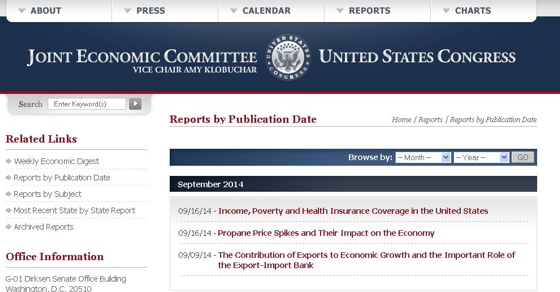 Furthermore, the URL is simply www.jec.senate.gov/public – no mention that it is aligned with the Democrats. Are they not as proud of their affiliation? Masking an agenda as the will of the general public? Or is the original site recognized as beholden to Democrats? Any reason is interesting. The Vice Chair’s name is also displayed prominently, in larger font than the Chairman’s.

The Republican website gave the primary navigation spot to their research (the “Topics” navigation link) and left the description and mission of the committee to the end of the navigation list for the curious (the “About” link).

The Democrats, on the other hand, list “About” first, a page which naturally describes the committee’s longevity (founded in 1946), diversity, and overall mission. Next on the navigation are “Press Releases” and “Calendar”, leaving “Reports” – the actual reason for the committee’s existence – as the second-to-last tab on the header.

Under “Reports” or “Topics” is where the differences get really interesting.

The Democrats reveal more of their agenda in their titles: “Social Security, Veterans, & Minorities,” “The Great Recession and Recovery,” “Women and Families in the Economy.” I found the “& Minorities” particularly interesting; are they running studies on aging, minority-race war heroes? However, as it turns out the link goes to a page titled “Veterans and Social Security.” It seems that the minorities were minor enough that the Democratic JEC hasn’t done any research on them yet, but that didn’t stop them from trying to get credit for having thought about them, kind of, at one point.

Quick poking around on the Republican website reveals an interesting article about the minimum wage. Apparently, the Joint Economic Committee did a study titled “Washington is the Worst Place to set a Minimum Wage” and concluded, based on a review of existing articles and data, that federal minimum wage laws are fundamentally a bad idea and show how contradicting studies use methods which bring doubt upon their validity.

Naturally, I was curious to see if the websites’ differences penetrated even to content. And they do.

Knowing the publication date of the report (July of 2014), I searched for it on the Democrats’ site. However, neither searching by subject nor by date revealed the report. It was simply omitted from the display of reports in its month of publication.

Turns out, the only way to find it on the Democrats’ website is to search for “Minimum Wage” in the search box. Each result seems to have at least one twin (one PDF version, one blog post version) and sometimes more duplicates. This makes the true number of results unclear.  Turns out that the article I sought is only on the Republican side of the site.

In the first page, the Democratic JEC had only one piece they wrote themselves on minimum wage. It is titled “Income Inequality in the United States.” It has one filler page, five and a half pages bemoaning the state of the middle class and income inequality, then offers two pages of Policy Proposals to solve everything. It has exactly 127 words on the topic of the Minimum Wage which endorse it. The report (written January 2014) writes “If the minimum wage were raised to $10.10 per hour, 4.6 million Americans could be lifted out of poverty,” a direct contradiction of the Republican JEC’s article (written February 2014) which reads:

Raising the minimum wage will create both winners and losers. The winners are those who keep their job at the new higher wage. The losers are those who lose their job, have their hours reduced, or fail to obtain any job at all. Contrary to popular belief, the winners often reside in high-income families while the losers often reside in low-income families. Thus, despite the good intentions, raising the minimum wage will provide little help to those who need it.

Could the JEC have entirely switched their opinion in the one month that passed between the two reports? Why is it that the Joint Economic Committee gives two segregated recommendations, depending on which party’s report you read? Isn’t the whole point to get a unified, nonpartisan opinion?

Ultimately, what we get is what we already knew we had. The Joint Committee presents the public with two faces, two mouths constantly muttering the same contradictory stories we’ve already heard based on publicly available data. One party specifically omits the other’s results when it presents its findings to the public. Both parties of the “Joint Committee” have their own researchers.

Is this “Joint”? Anything but. A civil discussion of ideas? Nope. A “Committee”, even? Doesn’t seem like it.

It is just a Chair and a Vice-Chair and their respective researchers.

Two voices not in conversation with each other telling the people what they want to hear. Does the Joint Economic Committee live up to anything in its name?