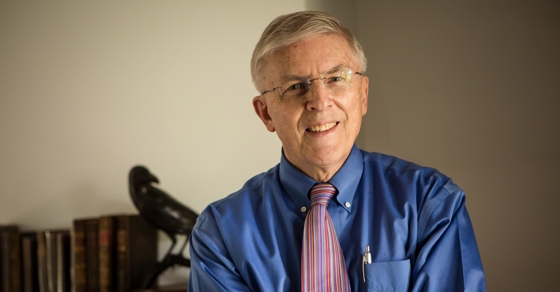 Ken Elzinga writes the popular Henry Spearman mystery novels under the pen name of Marshal Jevons. The series includes Murder at the Margin, Fatal Equilibrium, and a Deadly Indifference. In each novel, the main character, economics professor Henry Spearman, solves the crime by means of economic reasoning. His fourth and latest novel, The Mystery of the Invisible Hand, was recently published. We caught up with Professor Elzinga for the following interview:

The Mystery of the Invisible Hand is about art, economics and academics. As an economics professor at the University of Virginia you obviously have experience with the last two topics. What is your relationship to the world of art?

Years ago, I was dragged, kicking and screaming, into an art history class at Kalamazoo College. To get a liberal arts degree, it was art history or music appreciation. I thought the former was the lesser of two evils. To my surprise, I found the art history class fascinating. I took another one before graduating. If I were smart enough to teach any subject, I would like to teach art history – in part because it would be difficult to teach the subject without also exploring questions of faith and life’s meaning. Also, as Henry Spearman explains in The Mystery of the Invisible Hand, the market for art combines the economic theory of consumption and the economic theory of investment. Some people buy art as a consumption good; other buyers could care less about the “art” – for them, it is an investment play. Very few products have this economic dualism.

How did you get started with fiction writing?

I take no credit for initiating my sideline of writing fiction. Full credit (or blame) goes to the co-author of my first three mysteries: Professor William Breit (who has now passed away). My wife and I used to vacation with Bill. He always brought along a batch of mystery novels; I brought a batch of Christian books. We’d discuss our reading at dinner. Bill explained that in all of mystery fiction, there had never been a central character who solved the crime using only economic reasoning. I challenged him to create an economic-sleuth. He asked me join him in the endeavor. Almost as a lark, we started out. The eventual result was our first book, Murder at the Margin, where Professor Henry Spearman made his initial appearance.

The Mystery of the Invisible Hand is the first Marshall Jevons novel without your co-author, William Breit. What did you miss most about his involvement in the writing process?

Bill Breit was one of the most creative professors I’ve ever met. His career path involved a fork in the road: down one road was his being a professional comedian (he performed as Billy Breit); the other was to be a professor of economics. He chose the “dismal science” even though he was anything but dismal. Breit was the one who cared deeply about the names of characters, the titles of our books, and wanting our books to be good — as novels. My own focus was more on writing a book that “taught” economics. The tension between the two of us was important in the writing process. In addition to Breit’s creativity and humor, he was an intensely loyal friend, sometimes caring more about advancing my career than his.

Do you have any other people who help with the creation of your novels? Do you involve your friends or family in your creative process?

Every Spearman adventure was vetted, in manuscript form, by a couple economists Breit and I trusted . We would ask them to tell us if the economic analysis has any flaws. This also helped us learn if the manuscript could “stump” highly-regarded economists who would concede that we had played fair in providing the clues for the solution. Some of my most talented colleagues have been kind enough to perform this service, including former Nobel Laureate James Buchanan. My wife Terry, who likes birds, once researched bird migration patterns to make sure we had them right in The Fatal Equilibrium.

Who designs the covers of your books? Do you have a favorite?

I have never been involved in the design of the covers of the books, nor the titles. Breit cared deeply about cover design, trim size, and the like. I never shared this concern, in part because I don’t think I have any talent in this regard. Our partnership, over and again, reflected Adam Smith’s important principle of specialization and division of labor. Even in our writing, Breit primarily brought creativity; I brought discipline. Parenthetically, Mark Skousen suggested the title for The Mystery of the Invisible Hand.

What is a common financial mistake you see people make?

This is a thoughtful question, in part because it is difficult to pick one – so I’ll mention three common mistakes. First, it is a mistake to focus a lot of energy on making money, and then not give comparable thought about how to allocate it wisely – as between consumption, saving, and giving it away. Second, it is a mistake to think one can consistently pick winners in the stock market, and in the process not capture the benefits of diversification. Third, I think many people save too little, either because they do not understand the power of compound interest, or they put too much emphasis on current consumption versus future consumption.

Not a lot keeps me awake at night. I usually get along with about 5 hours of sleep each night, so when I go to sleep, I go right to sleep until my alarm goes off. In fact, I usually wake up about 15 minutes before the alarm rings. If the question is not raised literally, I worry about the future of the United States. I have never been blessed with children of my own, but I worry about what life will be like for my students as American becomes a country I less and less recognize. I also consider the threat of violence and warfare within our shores – something we never faced in all the wars of the 20th Century – to be more likely in this century.

When I first get up, I try to recite to myself, “This is the day the Lord has made, I’m to rejoice and be glad in it.” That is, I try to think of each new day as a day I do not deserve – in terms of my job, my health, my community – and so I should be grateful. Put differently, I try not to start my day with a complaining spirit.

Why does Henry Spearman think so many people do not understand Adam Smith’s “obvious and simply system of natural liberty?”

Spearman is struck at the number of people who, outwardly, express admiration for free markets and outwardly would be opposed to government control of the economy, but then see most every economic issue as examined as one of technique — and not liberty. Take the debate over raising the minimum wage: most all of the discussion is about the size of the effects on unemployment versus the increase in income for others. Some people recognize that proposals by labor unions to raise the minimum wage reflects a strategy to increase the demand for capital equipment (made by union members) as a substitute for labor (supplied by the non-union sector). Others write about the effect on individual workers versus families. Very few raise an objection to having a minimum wage set by the government (at any level, regardless of the distribution of costs and benefits) because it intrudes upon the ability of a buyer (an employer) and a seller (a worker) to enter into a voluntary agreement. An important part of liberty is to allow employment contracts between informed input purchasers and input sellers without government interference.

Under your pen name of Marshall Jevons, you are an economic storyteller, connecting economic theories to tangible stories. What are other examples of economic writing that has heart?

Always beware when you ask a professor, “do you have any suggestions for further reading?” I do.

I think Steve Levitt’s book (with Stephen Dubner) Freakonomics is a winsome introduction to how economists view the world. I’d also give a shout out to the follow-on book: Super Freakonomics.

Russell Roberts’ two books, The Invisible Heart is a novel – that teaches economics in a congenial fashion. I’d also recommend Roberts’ book, The Price of Everything.

Deirdre McCloskey’s work has been important to me. Start with If You’re So Smart.

Tyler Cowen is a very creative economist. In this vein is his book, aptly titled, Creative Destruction (also published by Princeton University Press, the publisher of three of my novels).

Paul Cantor, my University of Virginia colleague, in the Department of English, knows economics and explores the subject from a literary angle in (1) Literature and the Economics of Liberty (edited with Stephen Cox) and (2) The Invisible Hand in Popular Culture.

Regarding financial markets, Peter Bernstein’s, Against The Gods: The Remarkable Story of Risk, takes a tough subject and explains it in a winsome way, without dumbing it down.

I like the work of AEI’s Arthur Brooks, such as his Gross National Happiness: Why Happiness Matters for America – and How We Can Get More Of It. A cumbersome title, but a profound book on why economic output can matter.

Still worth reading is Bernard Mandeville’s The Fable of the Bees.

What are some of your favorite things that you’ve been able to do with your money?

In addition to putting bread on the table, income has allowed my wife and me to have a Lake House, where in the summer I can enjoy one of the things I miss about my home state, Michigan (the “Water Wonderland”) and where we have some wonderful neighbors. During the school year, we let student groups use the place for leadership retreats. I’ve also enjoyed the opportunity to travel which my income allows – though a lot of my travel is paid for by others. When I check in at a Marriott, I am often teased by the desk clerk about my 1.8 million points. My wife and I also have been blessed with opportunities to give away money, often to people and causes with which we have a personal involvement, admiration, and affection.

Do you have a favorite article on MarottaOnMoney.com?

I do not have a particular favorite but I appreciate the blogs where you go beyond what I’ll call financial counsel and offer an appraisal of broader topics of political economy. The blog reflects an understanding and appreciation for Adam Smith’s “obvious and simply system of natural liberty.” I wish that the Marotta and Russell columns that appear in my local newspaper also made their way into the Washington Post and the NY Times.

Thank you! Congratulations on your latest novel!