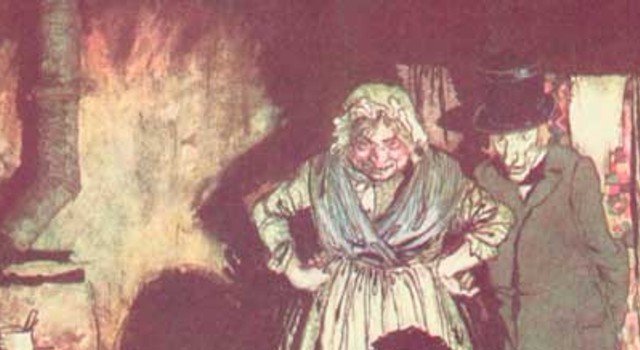 There are few better stories for talking about economics than Charles Dickens’s “A Christmas Carol.” Perhaps the most telling discussion in the story comes early in the first chapter when “two portly gentlemen” call on Scrooge to ask him for a donation to charity.

These two portly gentlemen have made a list of establishments to visit and solicit for donations. They approach their charity work like they do their businesses, with organized efficiency. They have papers and books. They come as a team. They present their credentials. They are polite. They remove their hats.

Subsequent reinterpretations of the story often try to make capitalism Scrooge’s problem and government-run social programs the answer, but that was not the case in Dickens’s day or in his story. The two portly gentlemen are capitalists and entrepreneurs. Their initiative extends to good works within their community.

They are passionate about their charitable work. They assume the best about Scrooge and his former partner. Their liberality is to make slight provisions for the poor and destitute who suffer during the Winter Season. They know their efforts will not end poverty for all time. They are simply trying to spread some “Christian cheer of mind and body.”

The two gentlemen focus on providing some meat, drink and means of warmth. The poor have nothing but a meager allocation of bread and gruel. They would like a little more bread. Some meat would be a great kindness. Drink and warmth are a great extravagance.

Scrooge will have none of this personal philanthropy. He argues that public entitlements are the solution. “Are there no prisons?” he asks. “And the Union workhouses? Are they still in operation? The Treadmill and the Poor Law are in full vigour, then?” After hearing these are still active, he complains, “I help to support the establishments I have mentioned: they cost enough: and those who are badly off must go there.”

Dickens was very critical of the New Poor Laws passed in England in 1834 by Lord Melbourne’s government. They altered the locally administered structure run by local parishes into a centralized system of workhouses. These changes cost more money and provided less relief.

The New Poor Laws were influenced by the ideas of three writers of the day. The first was Thomas Robert Malthus, who advocated limiting population growth so it wouldn’t increase faster than food production. Families were split up in the workhouses into three separate barracks to discourage conception.

The second writer was David Ricardo, who argued that wages naturally tend toward a subsistence level. This view, called the “Iron Law of Wages,” influenced Karl Marx’s dim view of the prospects of workers benefiting from capitalism.

And the third was the philosopher Jeremy Bentham, whose idea was utilitarianism, or the idea that the moral or ethical thing to do was whatever brought the greatest happiness to the greatest number of people. Similarly, laws ought to be structured to discourage what hurts society and encourage what helps society. That these principles be put into place with draconian authoritarianism is irrelevant to his view of ethics.

That each of these thinkers was wrong was unfortunate. That the government instituted their ideas was catastrophic. One of the two portly gentlemen reminds Scrooge, “Many can’t go there; and many would rather die.” Scrooge’s reply is Malthusian and utilitarian: “If they would rather die, they had better do it, and decrease the surplus population.”

Make no mistake. Scrooge is the advocate of the sufficiency of the state to involve itself in society’s welfare. Ill-conceived government programs are able to inflict misery better than any private charity. They have the force of law. How effectively the government actually does the job, Scrooge argues, is none of his business. He pays his taxes, minds his business and no additional concern is required.

Charles Dickens opposed the New Poor Laws as cruel and unchristian. He wrote “Oliver Twist” in 1837 and “A Christmas Carol” five years later partly as a response to this legislation. And in 1850 he wrote the journalistic account “A Walk in the Workhouse,” in which he decried the conditions he found.

Dickens’s biographer Jane Smiley described his competing philosophy this way: “It is not enough to seize power or to change wherein society power lies. With power must come an inner sense of connection to others that, in Dickens’s life and work comes from the model of Jesus Christ as benevolent Savior. The truth of ‘A Christmas Carol’ that Dickens understood perfectly and bodied forth successfully is that life is transformed by an inner shift that is then acted upon, not by a change in circumstances.”

We see that transformation in Scrooge when the nameless and faceless poor over which he has little power and means to save are replaced by his own clerk’s crippled son Tiny Tim. Whereas the nameless masses might be undeserving and able bodied, Tiny Tim is both a child and disabled.

“Oh no, kind Spirit! Say he will be spared,” Scrooge laments, only to hear the Ghost respond, “If he be like to die, he had better do it and decrease the surplus population.” Scrooge lowers his head in shame at hearing his own words and is overcome with penitence and grief.

Mercy embodies the idea that God puts the responsibility of alleviating some of the suffering in the world on you. God doesn’t charge you with all of it. And God doesn’t expect you to solve the problem completely. But He does expect you to be open to being the person He chooses to use to help. This openness does not solve the problem of trying to determine where God wants you to put your resources to work. Starting a viable business and hiring people can be an act of the highest charity. So can giving to charitable causes. The principle is summarized in apostle Paul’s letter to the Philippians 2:3: “Do nothing from selfishness or empty conceit, but with humility of mind regard one another as more important than yourselves.”

Dickens believed in the power of a changed heart. In “The Life of Our Lord” he wrote, “people who have been wicked . . . and who are truly sorry for it, however late in their lives, and pray God to forgive them will be forgiven and will go to Heaven too.”

The moment of Scrooge’s redemption occurs when struggling with the final Spirit, he holds “up his hands in one last prayer to have his fate reversed.” At this prayer the Phantom shrinks and dwindles down into a bedpost.

We see Scrooge’s changed heart on Christmas Day. He sends the prize turkey to the Cratchit family. He raises Bob Cratchit’s salary. But perhaps most convincingly for men of business is his generous giving to the two portly gentlemen including a great many back payments.

A changed heart freed from past sins is a powerful force of authentic spirituality in life. If you believe all of your time, talent and wealth belong to God, you won’t make any distinction between the charitable work you do for God and the rest of your life. And you won’t have any fear about doing what a benevolent God sets in your path to do.