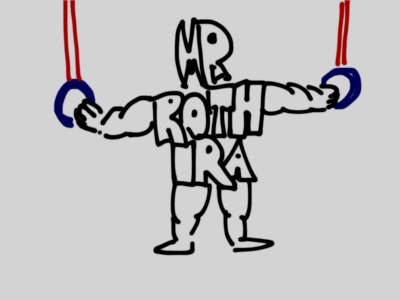 The Roth individual retirement account is like an Olympic gymnast of savings vehicles. Although I don’t expect Mr. Roth to don a leotard anytime soon, no one else can offer savers more support and flexibility with their retirement savings.

Mr. Roth, like a gymnast, could win a gold medal for his proficiency in a number of different events. To begin, Roths provide tax-free growth, freedom from future taxes and penalty-free emergency withdrawals.

Congress officially sanctioned Mr. Roth to assist savers in 1997. It was named after a real Mr. Roth, Senator Bill Roth, a Republican from Delaware. Since then, thousands of savers have taken advantage of his many talents in supporting their goals.

The first quality to understand about Mr. Roth is that he can put your investments where the Internal Revenue Service can never touch them again. That’s quite a compelling feature when you consider Uncle Sam’s obligation to pay for our nation’s unhealthy debt habits.

Some decide to work with Mr. Roth because they expect their taxes to go up in the future. Others don’t know what to anticipate, which is why they would prefer to go ahead and pay this tax liability now rather than play the wait-and-see game.

This tax-free growth feature of Mr. Roth is worth more than many investors estimate. Assume that for the last 30 years, you saved $5,000 annually in a taxable brokerage account, and I did the same with Mr. Roth. (I realize this scenario is only theoretical because contributions limits were below $5,000 in prior years, and Roths have existed for less than two decades, but this is allowed new.)

Also assume that we both invested in the same Standard & Poor’s 500 index. If we both withdrew the entire amount today, I would have $360,581 more than you after all taxes are paid. As you can see, Mr. Roth is a good person to know. 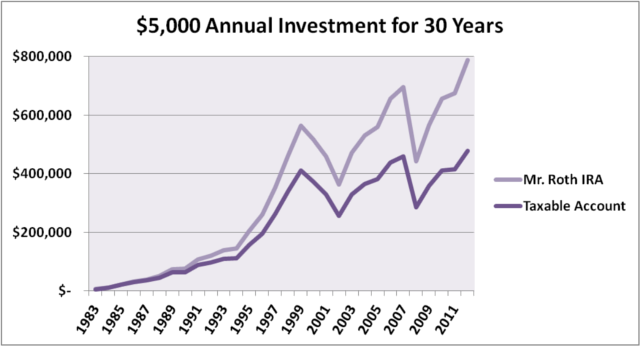 Mr. Roth offers other less commonly understood attributes. Consider, for example, his ability to assist with emergency reserve assets. Mr. Roth is not stingy. You can withdraw contributions, the money you give to Mr. Roth, at any time without incurring taxes.

If your account is worth $16,000 but you’ve only contributed $12,000, you can access this lesser amount with no strings attached. This makes the Roth a better place to put your emergency savings than a regular certificate of deposit. Other retirement accounts can have huge penalties if you withdraw early.

Mr. Roth is very generous during times of need. If you’ve had your account open for at least five years, you also may have penalty-free access to the earnings in certain medical situations. If you become disabled, all of the money, including earnings, is accessible and avoids taxes. Other medical emergencies allow you to avoid the 10% early withdrawal penalty but not the taxes on the earnings.

In a pinch, you can have a distribution check from Mr. Roth in a few days’ time. If you need it sooner, you could pay him a wire fee to have the money sent within hours. Although accessible, most investors avoid asking Mr. Roth to return their money unless it is a last resort. Accessibility but with a high psychological hurdle for withdrawals makes the best kind of emergency reserve option.

Tax-free saving for retirement is only one of the many talents Mr. Roth offers. If you have yet to become fully acquainted, consider this your formal introduction and start getting to know Mr. Roth today by asking a fee-only financial advisor for help.