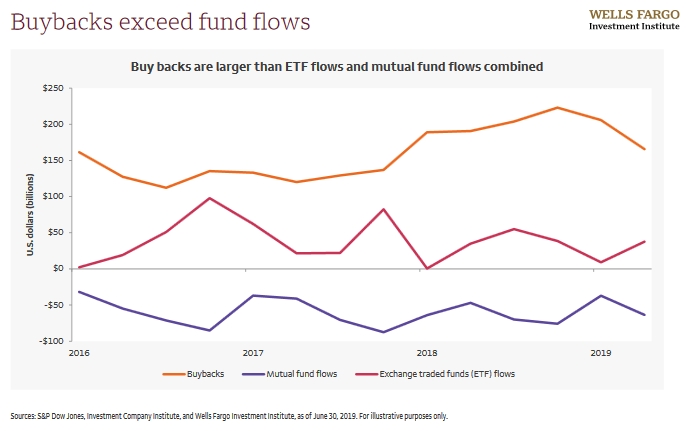 The commentary suggests that the key takeaway is that “free cash flow has helped companies to buy back stock, which has supported the U.S. equity market.”

However, in my article from over a year ago entitled, “Do Stock Buy Backs Bring Real Value?“, I explained:

A stock buyback is when a company uses part of its revenue to repurchase shares of its own stock. …

Notice that a company buyback program appears to do little benefit or harm to anyone. Corporations and shareholders cannot use the technique to engorge their profit or portfolios, neither does it take advantage of workers or customers in any way. By itself, a stock buyback program is economically neutral.

There is nothing nefarious or crafty about this technique. Sellers are not required to sell. In fact, every investor who is part of a dividend reinvestment plan (DRIP) is engaging in their own personal stock buyback program.

Stock buybacks are a fairly boring use of free cash flow. One of the benefits to shareholders is that a buyback program can reduce share price volatility. A second benefit is that it can empower shareholder tax management by prioritizing capital appreciation over dividends.

I wrote the article last year because of the politicizing of stock buybacks by the liberal news media.

Since that article, there have been another round of dire warnings:

None of these perspectives make any sense. Stock buybacks are an efficient way to return money to investors. This low interest rate environment is a good time to borrow money. A corporation cannot raid corporate assets through stock buybacks. Neither do employees have any right to corporate assets other than wages. And taxpayers do not receive corporate taxes, the government does. And to the extent that tax cuts help corporations at the expense of government, this is both what really bothers the liberal media and is also a good thing.

Some of the flow out of mutual funds have been into exchange-traded funds (ETFs). We often move new clients from mutual funds with higher-than-desired expense ratios into lower cost ETFs. This is part of the movement to lower average expense ratios. This flow has been negative even when mutual fund and ETF flows are combined. During this capital outflow, stock buybacks have helped stabilize stock market prices.

Mark Hulbert, in an opinion piece for MarketWatch entitled, “Here’s what mutual fund investors really tell us about the stock market now ” has a slightly longer time period for fund flows: 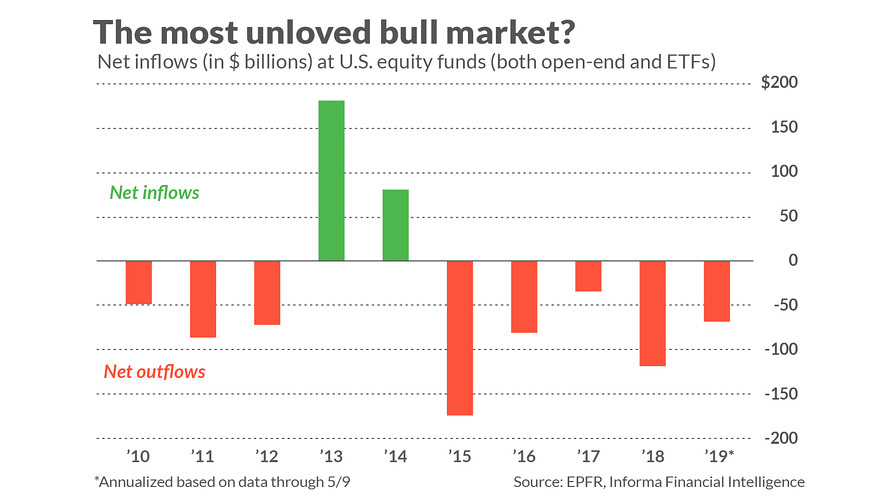 There are several reasons why investors have been moving money out of equity mutual funds. Among them is likely that investors are wrongly worried about the market “setting new highs” and fearfully believe that it has to crash soon.

Unfortunately, investors who have been lightening up on their stock allocation have missed a significant amount of appreciation. This “unloved bull market” is unloved by many politically liberal commentators angry that Donald Trump and his tax cuts may have been good for corporate profits. Many have been hoping that a large recession would reduce Trumps reelection chances.

One of Hulbert’s conclusions is that “the fund flow data tells us little about the stock market’s intermediate- or longer-term trends.” Or in other words, the market is inherently volatile. We believe it is always a good time to have a balanced portfolio. And it is best to avoid timing the markets.