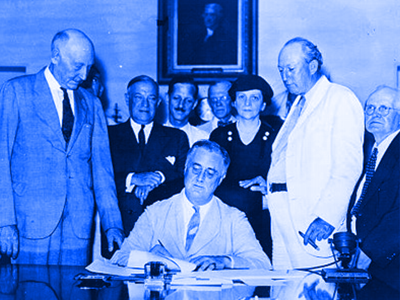 Social Security has been called the third rail of politics. Good thing I’m not a politician. Someone has to make the tough decisions.

I was on the radio recently when a conservative listener called in and expressed the opinion of many on both sides of the aisle.

He said (and I’m paraphrasing), “I was forced by law to pay into Social Security and I want back at least what I paid in plus a little interest. The bottom line, which sounds selfish, is that if I had to pay it, I want it back.

“If they give me a tax credit for the rest of my life starting right now for the amount I paid in, I will go with that. Or a means test where if you make a whole lot of money you don’t get it. But if I’m forced to pay something in, I want my money back.”

Here was my answer. “I’m sure you, like most Americans, have two parents and four grandparents, and there are the six people who have received what you paid in. So at least it has gone to your family members.

“The real question is whether we want to make our children and grandchildren pay into our system. Because the money just isn’t there. And if anyone says it is, why did we need to raise the debt ceiling?

“If it is any consolation, just say, ‘We are not going to hold a gun to our children’s and grandchildren’s heads and force them to endure what we did.’ Two wrongs don’t make a right.”

I went on to mention Thomas Sowell’s article “The Missing Money,” which concludes, “Since the law does not allow private pension plans to be set up in the financially irresponsible way Social Security is, that is where young people’s money should be put if they ever want to see that money again when they reach retirement age.”

There are two different ways to think about Social Security. One is as a forced retirement savings. This was clearly how the legislation was marketed politically and gained its initial political support.

Even the legal exemptions today are based on this idea. The Amish are exempt by claiming Social Security is an insurance premium that opposes their belief that families should take care of their elderly. Unfortunately, this option is not available for other objectors.

A second way to think about Social Security is a redistribution tax from the working young to the retired elderly or disabled. This is clearly how current government cash flows operate.

Americans do not divide neatly into endorsing one of these two perspectives. Most people vacillate between the two, which is understandable. Both perspectives are faulty. Neither one can be defended. And the easiest way to criticize one is by adopting the alternative perspective.

If we totally endorsed Social Security as a way to force retirement savings, we would privatize the system. Most liberals are vehemently opposed to this idea. They generally hate putting money into Wall Street and assume that investment managers like me are just trying to increase business.

The mistrust of Wall Street is nearly unanimous on the left. They seem to conceive Wall Street as some faceless corporate force that makes money off the misfortune of others. But in reality, the trading on Wall Street is people just like you and me deciding if we would rather buy or sell at the prices offered every day. Every day the stock market drops, it is because more of us are selling than buying.

Most on the left also mistakenly believe that money put into a privatized system would be more at risk and in danger of producing a lower return than Social Security. No amount of looking at the facts seems to dissuade these liberals from their misconceptions.

If people retiring today at age 66 had begun contributing to their private retirement account in 1966 at age 21, their annualized return would be 9.58%. During that time the S&P 500 went from 86 to 1325. They could have earned an additional 3.31% from dividend reinvestment. Any 45-year investment horizon would have done better in the markets than the return of Social Security.

In contrast, the so-called return on our investment in Social Security has been abysmal. Several calculators can approximate the equivalent Social Security return. The average real return is barely positive. Mine is severely negative.

Single black men have the worst possible return. All of their earnings are subject to Social Security tax, and they have the shortest life expectancy. Coupled with the fact that no one can inherit their benefits, their rate of return is the worst possible.

White women who have never worked experience an infinite return. Although they have not contributed personally to Social Security, they receive a spousal benefit at retirement age and inherit their husband’s full amount if he predeceases her.

Married couples with two incomes often increase their contribution to Social Security without any corresponding increase in their benefits. This marriage penalty only applies to dual-income families. Otherwise there is a benefit to being married because the survivor can continue to collect the spouse’s full Social Security.

Half of Americans pay zero federal income tax, but they often pay 12.4% Social Security and 2.9% Medicare for a total tax of 15.3% of their income. Low-income workers qualify for an earned income tax credit specifically designed to offset the burden of Social Security taxes and provide an incentive to work. But for most lower income workers, this tax impoverishes them.

Private accounts would provide the potential for inheritance. Children living in poverty with a single mother could inherit their fathers’ accounts if they died. Lower income families could build wealth lasting more than one generation. Instead, we force each generation to rely on a government handout for their savings plan. And this return is negative.

A study by William Beach and Gareth Davis computed the cumulative effects of Social Security’s dismal returns. Imagine a community the size of Charlottesville, Virginia, of 44,000 young married double-earner couples in their 30s with each person earning the average wage and each couple having two children. That community loses $23 billion by receiving Social Security rather than what they could have saved in a private pension plan by retirement age using the same dollars.

Taxes matter. And flowing workers’ retirement savings through the spendthrift irresponsible bureaucracy of the federal government is worse than anything they could have experienced in private accounts invested in the stock market.