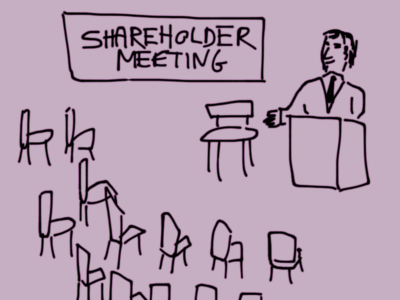 Springtime ushers in a rush of annual shareholder meetings, but these days, few investors are making this corporate pilgrimage. That’s a mistake. Attending at least one meeting for a stock you own is a very good idea.

Every publicly traded company holds an annual shareholder meeting, and most companies fulfill this requirement with as little time or meaningful content as possible. But failing to participate can be costly when investors and executive managers fail to look each other in the eye.

Of the thousands of public shareholder meetings, most begin with the chief executive reading a boring scripted financial update that highlights the wonderful opportunities that lie ahead. The board of directors is elected (usually incumbents who are reelected for decades), and a short period is left for questions and answers. Yawn.

My first experience with these shareholder meetings was a major turnoff. In March 2009, I purchased a small number of shares of insurer Genworth Financial (GNW) stock for reasons I do not proudly share among value investors.

It traded for $1 per share, and I wanted to own shares in a local company (it’s main office is near me in Virginia). I don’t recommend the $1 strategy, but my arbitrary bet paid off thanks to the Federal Reserve, Obama and Bush administrations’ federally funded campaign to save the financial industry. The stock make a rapid recover in 2009 and now changes hands for around $10.

The following year, I decided to attend the annual shareholder meeting, held at a local hotel next door to the corporate headquarters in the suburbs of Richmond, Va. I was very interested to see how the management executives addressed the public a year after this financial titan lost billions of dollars of shareholder money and got bailed out as it teetered on bankruptcy.

What I found stunned me. The large room was full of dark suits, all Genworth employees and directors. I was one of five or six shareholders in attendance, and the Genworth executives offered a fairly cold reception. I later learned that few real investors show up at these shareholder meetings. Of the few that attend, most of the outspoken ones are crackpots looking for any podium to heckle corporate bigwigs. Most shareholders without an ax to grind ignore the small print offer to attend this get-together.

Shareholders offered few questions during the Q&A period. I even summoned up the courage to inquire about the risk of falling international real estate values. The chief executive officer wrapped up the Q&A as quickly as he could without coming across as entirely rude. He then closed the meeting and thanked us for our support and attendance.

Despite my experience, I’ve since learned there are only a handful of truly remarkable annual shareholder meetings. At the top of the list is the Berkshire Hathaway (BRK-B) gathering, the “Woodstock for Capitalists.” Every year in Omaha, shareholders get hours of direct access to Berkshire’s iconic chief, Warren Buffett and his colleague Charlie Munger. For football fans, the Green Bay Packers offer an enticing annual shareholder meeting held at historic Lambeau Field while watching prior-season highlights on the Jumbotron. The football team periodically sells shares directly to the public, but these shares are not publicly traded.

But the great majority of shareholders meetings have no excitement at all.

Many blame a change in stock ownership for the loss of interest in shareholder meetings. Just after World War II, individuals owned 90% of stocks. By 2011 they held only 30% of stocks. Pension funds, mutual funds, life insurance companies and endowments controlled the remainder. These institutional owners show no interest in participating in these corporate dog and pony shows, and they often fail to take the time to vote on behalf of the shares they manage.

Despite the waning interest in annual shareholder meetings, I still plan to attend at least one shareholder meeting a year. I think of these meetings as I do political elections. Even though I am sure my single vote has no effect on the outcome of a presidential or congressional race, voting reminds me of the freedom I enjoy that I should never take for granted. It’s a patriotic duty.

Shareholder meetings offer the opportunity to look beyond the glossy annual reports. Sure, I can always vote my shares by mail or electronically through the proxy voting process. And my strongest voice is in my ability to vote with my dollars.

But these meetings are a reminder that an investment is more than a piece of paper or a digital entry in an online brokerage account. While attending a shareholder meeting, you get to look the CEO and top management team in the eye and know that they are human beings. More importantly, these meetings remind the corporate management that they are there to serve actual people.

Many of the abuses in corporate America occur when those in top management forget they are merely stewards for the real owners of our most prestigious companies. For example, Léo Apotheker presided over the disappearance of $30 billion of market capitalization at Hewlett-Packard (HPQ), but still walked away with $13 million, including a “performance bonus” of $2.4 million. He even made a deal that later cost the company $8.8 billion. Shareholders’ lack of interest is at least partly to blame for unfairness like this.

If you own stocks, join me in attending at least one shareholder meeting a year. A growing number of firms are also offering a live webcast so you can virtually attend the meeting. I can’t promise much excitement, but you might leave with a stronger sense of connection and responsibility over your investments.