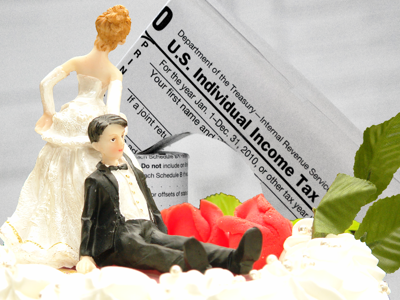 Laws have always regulated who may marry, the obligations related to marriage and children and whether and how a marriage can be ended. Governments have always put their own social agenda above the pluralism of personal choice. Never in history have governments considered marital relations strictly private.

In the U.S. tax code, hundreds of assumptions and provisions are based on the definition of marriage. And many more are found in federal entitlement programs, immigration laws and social benefits.

A man and a woman living together outside of marriage are taxed separately. Each is responsible for his or her own income and benefits separately from any personal deductions. But as a married couple, their two incomes are combined, pushing their taxable income jointly into a higher tax bracket. For the lower brackets, there may be no change in tax. But in the higher brackets, a married couple may be obliged to pay additional tax. Because of the progressive tax code, the result is literally a tax on marriage. I’ve known couples who choose not to get married simply because of the increased taxes.

Taxes are usually the same or higher for a married couple, especially when both work, than they are for those who just live together. The only tax benefit of marriage occurs when one spouse chooses not to work at all. The couple thus avoids any additional taxable income and adds one slim additional personal exemption.

Imagine that Joshua and Jennifer are trying to decide if they should get married or just live together. If Jennifer earned nothing, her standard deduction would be wasted on a tax return with no earnings. By getting married, she can use her deduction to reduce Joshua’s tax burden.

Even in this case, there may be ways to get the benefit and remain single. If Joshua hires Jennifer to work in his business, he can control how much of his profit he transfers to Jennifer’s return. And if Jennifer has any income of her own, they probably will not benefit from the married filing jointly tax status.

Staying single may save taxes for dual-earning couples. Two returns allow each to take advantage of different tax-saving strategies. Many itemized deductions can be taken on one tax return while the other benefits from a standard deduction. One can receive earned income tax credits and qualify for benefits based on the lower income while the other reports a much higher income.

It gets even worse if Joshua’s business is booming. Starting in 2013, itemized deductions and personal exemptions are being phased out again for higher wage earners. Pick a wealthy spouse, and as much as 3% of your income will be subject to tax again. Marrying rich might be consolation enough, but the tax code is one reason why the spouses of wealthy people often decide not to work.

As long as Jennifer is single, her situation is unaffected by the tax bull’s-eye painted on Joshua’s back. In fact, she may legitimately qualify as a single mother in need of government assistance. If she earns a minimal amount of income she might be able to qualify for the earned income tax credit, potentially worth $5,000. This amount is refundable, meaning her tax burden would be negative and the government would pay her money. Filing jointly, this benefit may disappear because of Joshua’s income. There are significant penalties for abusing the earned income credit, but I’ve seen many people legitimately qualify who do not fit the spirit of the law.

Dependents are helpful on a joint return, but they are also useful on separate single returns. An unmarried couple with a family can shift dependents between the two separate tax returns year to year to achieve the maximum benefit.

The full child tax credit is eligible to any single person with an adjusted gross income under $75,000. The phaseout for married couples filing jointly would logically be $150,000, but it begins at $110,000.

If the market goes down, they can still benefit. Every single person can deduct up to $3,000 in excess capital losses. A married couple is not allowed to double that deduction.

Even if Joshua is subject to the alternative minimum tax (AMT), adding Jennifer is not much of a benefit. The AMT allows an individual exemption of $48,450. But an exemption for a married couple is only $74,450. Falling short of twice the individual exemption leaves an additional $22,450 exposed to taxation.

If Joshua and Jennifer are older, the situation is just as complex. Social Security is not taxed so long as your income is low enough. Get married, and as much as 85% of your Social Security could be taxed. And because your incomes are added together, the rate starts at the top of your spouse’s marginal tax rate.

There is a family maximum benefit for Social Security. If both people had significant careers and thus their own benefits, they may be better off single. If they were to marry, their combined benefits might be reduced to the family maximum level.

In certain cases being married can help you receive more in benefits. If Jennifer never worked or does not qualify for much in Social Security benefits, she would receive at least half of Joshua’s benefits. In that case she could also inherit Joshua’s benefit if he predeceased her.

If you are both American citizens, you owe no estate tax when you leave everything to your spouse, perhaps one of the few benefits of marriage. If Joshua and Jennifer aren’t married, the government considers any transfer over $13,000 a year subject to gift and estate taxes. If they are married, they can avoid estate taxes when the first one dies. But they can’t evade them forever. When the second spouse dies, any estate taxes due are still owed.

And that is how federal tax law encourages marriage. A productive spouse who supports his or her family well is discouraged. The tax code appears to favor rich spouses only when they are dead. With all of the tax penalties attributed to marriage, it is a wonder that anyone decides to get married. Current statistics show that many do not.

My wife and I celebrated our 30th wedding anniversary early this year. There are many wonderful reasons to get married in spite of the tax code. I highly recommend it. With all of the difficulties in society today, we do not need policies that dissuade people from marrying.

The progressive nature of the tax code has exacerbated the marriage penalty. As Congress has sought to soak the rich, it has increasingly punished the pooling of income within marriage. We cannot simultaneously have a progressive tax burden, equal taxes on families with equal income and marriage neutrality. The best answer, of course, would be a fair flat tax. If Congress won’t encourage marriage, at least it should not discourage it.