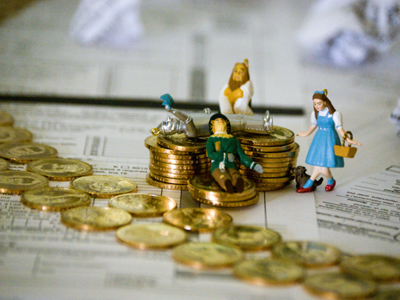 Tax credits are much more valuable than tax deductions. Deductions only reduce the amount you are taxed on. One dollar of deduction might only be worth 35 cents. In contrast, tax credits are a dollar-for-dollar reduction in your tax bill. And a refundable tax credit could mean the government will owe you money you never paid in the first place.

The final tax formula is “Total tax minus payments equals the amount you owe or have overpaid.” The critical part of this formula is that payments include not only the money you have given the government but also any tax credits you are eligible to receive.

But most people fail to claim all their legal tax credits and miss opportunities to gain some real wealth redistribution.

For example, if college students have earned income, they can receive the Making Work Pay tax credit. It’s a refundable tax credit worth 6.2% of earned income with a maximum of $400 per person. This credit is phased out for middle-income families but not for their children. They are eligible as long as their parents don’t claim them as dependents.

Even if these students pay no tax, they will still receive a check from the IRS for $400. That’s the beauty of a refundable tax credit. Students who file a tax return can take advantage of several other tax credits.

As a parent of a college student, you could receive a Hope tax credit. Usually this is a $1,800 credit for the first $2,400 spent on a college education during the first two years. But for the past two years it has been enhanced for students in the Midwestern disaster area to be $3,600 on the first $4,800 spent. If you have saved in a College 529 plan, you cannot receive this credit for money disbursed from the 529.

Alternatively you can get the American Opportunity credit, which gives you up to $2,500 on the first $4,000 of educational expenses. It isn’t limited to the first two years of college and is partially refundable. You can also take advantage of the Lifetime Learning credit and get $2,000 on the first $10,000 spent. Even part-time students who only took a single class are eligible.

In many very rich families, everyone got a new home this year. Money is being given to each child to help him or her buy a home and make payments. In three years all the homes can be sold for a profit. In the meantime everyone gets an $8,000 refundable tax credit.

If you install a new air conditioner, windows, doors, roofing, furnace or water heater, you can also qualify for tax credits. The replacements have to be more energy efficient. Nearly everything new qualifies. Even those with enough discretionary income to make improvements without any governmental incentives can get a $1,500 tax credit.

According to the IRS regulations, nearly every window sold today will qualify as more energy efficient than the older windows being replaced. But the window companies have lobbied for taxpayers who can’t afford to replace their windows to subsidize wealthier individuals who can. Nearly anything can be justified these days by calling it green.

The geothermal heat pump manufacturers must have had an especially adept lobbyist. Their merchandise isn’t subject to the $1,500 cap and is worth 30% of the cost. So are solar energy systems or small wind energy systems.

There’s even a tax credit for contributing to your retirement account. Couples earning less than $50,000 can get a tax credit up to $2,000. They can get a tax deduction for the contribution and still receive the credit. Even students can qualify if they are part time and not claimed as a dependent.

Probably the largest of all is the Earned Income tax credit. It is intended as the primary way to help the working poor, defined as a family of four with an income less than $45,295. The maximum credit is $5,028 with two children.

If you choose to take your children as dependents, you may also qualify for the child tax credit. It provides a $1,000 tax credit for each child as long as couples earn less than $110,000.

Finally, there is still a federal energy tax credit if you buy a hybrid electric vehicle. Incredibly, the IRS has ruled that even golf carts qualify under the rules of the $700 billion bank bailout. Every golf cart manufacturer has applied to become a licensed motor vehicle dealer and modified its carts to be street legal and plug into the wall. Getting a $5,900 tax credit on buying a golf cart can’t possibly be what legislators intended.

Most of these tax credits are just a percentage of what you have to spend to qualify. Because the poor don’t have much discretionary income, these tax credits do not help them at all. Mostly they subsidize the upper middle class and the businesses in specific industries who have lobbied to qualify.

I’ve personally taken advantage of nearly every tax credit available. In fact, this year each of my children got refundable credits giving them thousands of dollars more than they actually paid. Tax planning and management is increasingly a crucial part of wealth management. But it is terrible public policy. I think it is every citizen’s civic duty to vote against the hands that try to bribe special interest groups with tax credits.

Hundreds of other federal tax credits and a host of state tax credits are available as well. Simplifying the tax code is the easiest way to reduce or eliminate loopholes and bring sanity back to the process.

As always, the tax code is as easy to understand as a flying monkey. Perhaps this is another reason why most people leave hundreds or even thousands of dollars of refundable tax credits unclaimed. This is especially true of the poor who don’t have tax professionals to help them decipher and access the multiple forms required.

The moral failing belongs to voters and politicians who support nearly every proposed tax credit and then are surprised at the consequences. Until our country comes to its senses, tax management will remain a way to build and protect your family’s hard-earned wealth.