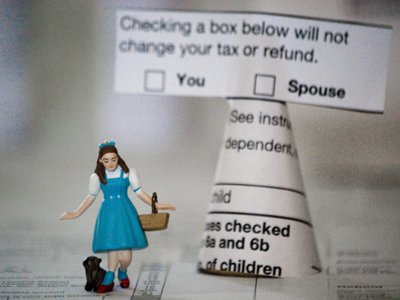 Few Americans look forward to the idea of filing taxes. At best we feel like Dorothy being dropped into the Land of Oz. At worst, we feel like the Wicked Witch of the East having the house dropped on us.

As Glinda advises us, “It’s always best to start at the beginning,” and at the beginning of the tax return is determining your filing status. You would think that this is an easy and straight forward question. But since this is the beginning of dangerous journey on the yellow brick road, it is worth understanding the inequities that this section of the code causes.

Two different people with the exact same income and the exact same deductions can end up with very different amounts of tax owed, simply because of their filing status. Married couples -rich and poor alike- often bear the brunt of the inequities created by our current tax system

Every tax system does a certain amount of harm. The more progressive the tax system, the more devastating the unintended consequences. No marriage-neutral tax system can exist given a progressive taxation system.

Let’s look at some examples.

Michael and James work in the same business. Each makes the same salary and takes the same deductions. The only difference is that Michael’s wife stays home, while James’s wife works at the firm.

However, James and his wife find themselves paying significantly more tax simply because they are married filing jointly.

If James and his wife are both low-income their filing status will dramatically change their tax status. A low income couple who marries and combines their income can forfeit other programs designed to help the truly needed. The most important of these programs is the Earned Income Tax Credit (EITC).

EITC isn’t small change either. In fact it is a much better way of targeting poor working families than raises to the minimum wage. For 2007, the maximum EITC credit is $4,716 which can make a huge difference in a struggling family.

The marriage penalty remains even if James and his wife are well-off. They are taxed as though they represent one very high income taxpayer and must pay more than they would if they were unmarried and just living together.

Because James and his wife are taxed at a combined rate, there is very little incentive for James’s wife to continue working. Another way to think of it is a tax on families with two earners. In other words, it is a tax on married women whose husband’s work, especially on women with high incomes.

James and his wife, by combining their incomes, have pushed each other into the top marginal tax bracket. That means for every dollar that James’s wife earns, she is probably taxed at over 50%, including federal, state, and local taxes.

Now compare James’s situation with Michael’s. If Michael’s wife can save a dollar by bargain shopping and preparing homemade meals, they are a dollar richer. James and his wife would have to earn at least two times as much to fare as well. Because of their combined income pushing them into the highest tax brackets, the government will take over half of everything they earn.

They will also have additional expenses as a result of working, and few, if any, of these expenses will reduce their income. Their business clothes, gas, and child care expenses may all have to get paid with after tax dollars making these expenses two times more costly than the income they may generate.

If all of this public policy debate makes your head swim, you are not alone. The bottom line is: The flatter the tax system, the less it matters whether couples combine their incomes or not. If every dollar of income were taxed the same and there were no deductions or credits, it would not matter if James and his wife combined their incomes. The same flat percentage of a combined amount is still the same flat percentage.

Practically speaking, many couples would be better off having either mom or dad stay at home. Having one family member who is working at reducing expenses and improving lifestyle can be the least expensive way to increase family wealth. Saving money by doing more things for yourself is worth two times the income earned by the spouse who winds up in the top brackets. And besides, “There’s no place like home.”