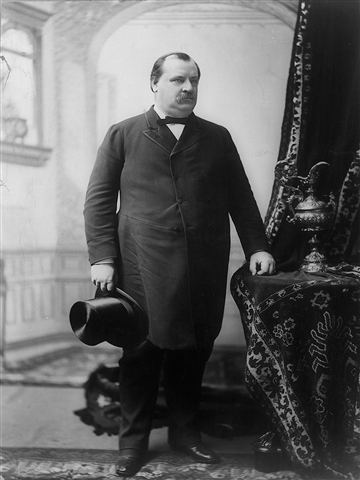 The 2012 elections are just a year away and I read with interest Paul Whitfield’s article for Investor’s Business Daily entitled, “Grover Cleveland, The Last Libertarian President”:

He vetoed hundreds of spending bills, refusing to succumb to political temptation whether it was wrapped in patriotism or sob stories.

After the Civil War, raids on the U.S. Treasury disguised as patriotism were routinely approved. For example, Union military veterans had become a powerful special interest group. Expenditures on their pensions increased about 500% over 20 years, Alyn Brodsky wrote in “Grover Cleveland: A Study in Character.”

Who could say no to a patriotic veteran seeking a little additional compensation?

When Congress passed a bill granting pensions to veterans for injuries not caused by military service, he vetoed it.

Who could say no to a hard-working American farmer seeking a smidgen of government help?

In his veto message, he wrote: “I can find no warrant for such an appropriation in the Constitution, and I do not believe that the power and duty of the general government ought to be extended to the relief of individual suffering.”

He added, “The friendliness and charity of our countrymen can always be relied upon to relieve their fellow citizens in misfortune.”

It reminded me that in the 2010 elections here in Virginia we gave property tax exemptions to veterans and the elderly disabled. President Cleveland would not have. I’m all for veterans and the elderly. I’m for girl scouts and middle school math teachers as well. I’m also for small business owners and the struggling average family. Such feel good distinctions set into legislative concrete rarely serve us well.

In probably the best description of Cleveland’s approach Whitfield writes:

Cleveland had another edge that many modern politicians lack: courage. He vetoed 414 bills during his eight years — 1885-89 and 1893-97 — in the White House, forcing Congress to curb its appetite for spending.

Cleveland served two non-consecutive terms. He is counted our 22nd and 24th President. This is not the only way he was unique. He was also a Democrat. He was a “Bourbon Democrat.”

Bourbon Democrats represented business interests, generally supporting the goals of banking and railroads but opposed to subsidies for them and unwilling to protect them from competition. Bourbon Democrats were promoters of laissez-faire capitalism (which included opposition to the protectionism that the Republicans were then advocating). They opposed imperialism and U.S. overseas expansion and fought for the gold standard.

Bourbon Democrats sound a lot like today’s Tea Party movement, more libertarian than Democrat or Republican. Cleveland has been described as the last true libertarian president. Apparently Ron Paul agrees and keeps a picture of Cleveland in his office. Maybe it reminds him that such Democrats can exist.