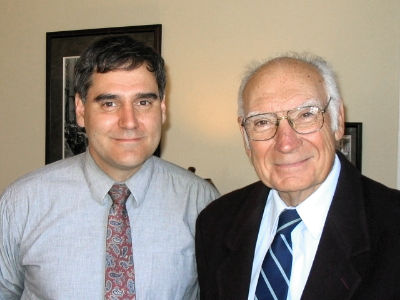 Roughly 36 percent of the grandparents surveyed by AARP said “spoiling (grand)children by buying them too much” was a part of a grandparent’s financial role.

And it’s fun. Ask George Marotta, who is not a baby boomer. The 85-year-old Palo Alto patriarch has turned helping his 10 grandchildren into a hobby that has paid off for multiple generations. He and his wife started in the mid-1980s, and over the years have plowed cash into bank accounts, 529 plans and Roth IRAs for all of the grandchildren.

Their total investment of just under $700,000 into 529 college savings plans has already put five grandchildren through college; four more are now in college and one is still in high school. And there’s $708,335 left to fund medical school for one, divinity school for another, and graduate school and continuing education for all.

“We had more than we needed for ourselves, and so we thought we would help the grandchildren,” Marotta said, noting that he and his wife became financial planners in Palo Alto in the mid-1980s, just around the time the dot-com boom was taking off. Widowed 10 years ago, Marotta has since remarried and is now a research fellow at Stanford University’s Hoover Institute.

“I recently sent an email to my 10 grandchildren, saying ‘Don’t worry about your career; do something you really would like to do. Experiment if you want,” said Marotta. “We’ve got you covered.”

David John Marotta, one of George’s three sons, said: “He has been my mentor.”

So how do you do that? Even if you don’t have Silicon Valley/Marotta wealth, you can make a difference in the lives of your grandchildren, and do it without hurting your relationship with your kids. Here are a few ideas, from the real experts — folks like Marotta who are financial advisers as well as grandparents.

Stern goes on to list suggestions from Financial advisors on strategies to have the greatest impact for the least intrusion into the lives of your grandchildren. They are all good advice and include:

My parents, George and June Marotta, did each of these in measure and according to their values. As a result, the grandchildren have been able to graduate debt free. They have a little capital to get started in life. And they learned the importance of working and saving in Roth IRA accounts.

My father has been my mentor in the financial world of what information is most important to pay attention to, and how to structure a fiduciary business to best put the interests of clients first.

I continue to see that for many young people, one or more grandparents play a significant role in the course of their life. Often they realize and articulate that role much later in life. On behalf of all the grandchildren who aren’t yet old enough to appreciate the role of their grandparents, I address this to all of those grandparents: Thanks.