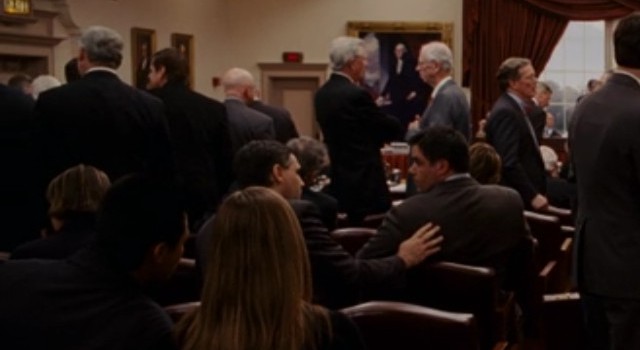 This Friday, June 22, 2007, the movie Evan Almighty opens in theaters. Filmed in and around Crozet, I had the opportunity, like many in Charlottesville, to be an extra in the movie. Watching the movie being made from the inside only increased my respect for the business of movie making. Last week I had a chance to see Evan Almighty at the Charlottesville Premier. The wait was worth it.

Directed by Tom Shadyac and starring Steve Carell, Lauren Graham and Morgan Freeman, Evan Almighty is said to be the most expensive comedy ever made. Producer Michael Bostick need not be worried.

The day that Morgan Freeman was on the set was especially memorable. His presence and acting ability reflected his credentials: an Oscar and three Oscar nominations. Oddly enough, having an Oscar winner in a movie has very little effect on the ultimate profitability of the movie nor does it have much effect on subsequent DVD sales. The Oscars are Hollywood’s opinion of film’s artistic value. The ticket sales are the masses opinion of the movie’s entertainment value.

Oscar winners require producers to make a difficult cost/benefit calculation. While an Oscar winner is a drawing card that increases revenue, they can also demand more for their presence thereby reducing the film’s profitability. Morgan Freeman’s performance certainly enhanced Evan Almighty. He delivers some of the funniest lines of the movie.

For Evan Almighty’s success, the first few weeks are critical. In the era of Jaws (1975) and Star Wars (1977) movies were only released on a few screens and ticket sales peaked several weeks later. Since the 1970s movie attendance has trailed off more and more quickly. Today, attendance drops sharply within the first couple of weeks as a majority of people wait for it to be released on DVD.

Most homes have a DVD player. Their owners buy an average of 20 movies a year and watch each of them twice. After adding in the bonus material (e.g. delete scenes, special effects) the average household is watching well over 100 hours each year. The loyalties are shifting away from public movie attendance and cable TV to DVD usage.

DVD sales provide about 60% of a feature film’s revenue. In contrast, those actually watching the movie in a movie theater only provide 14% of a film’s revenue. The remaining revenue comes from television and other sales (e.g. television, foreign theaters, hotel rental). Studios have found that although there is some competition between movie formats there is much more symbiosis. Rather than decreasing their revenue they have learned to use the buzz generated by a successful movie release to enhance all their other sources of income.

As the DVD source of revenue has become more important, studios have decreased the time it takes for a theater movie to be released on DVD to only a few months. The movie release has become more an advertisement for the DVD release so that consumers can make their decisions before the excitement of the marketing campaign has faded.

Studios are also increasingly feeling the need to release their movies on DVD more quickly in order not to be scooped by the rise of immediately available pirated versions.

As a result of the quick release, consumers now categorize movie releases into those that must be seen in the theater and then purchased on DVD verses those that they can wait until they are released on DVD and could be purchased or rented. I’m sure that those in Charlottesville who were extras will see Evan Almighty several times in the theaters and then buy multiple DVDs for their friends and family.

Another engine driving sales is the constantly changing media format. Those with movie collections in VHS format are re-purchasing higher quality DVD versions of their favorite movies. Now, with the advent of the even higher definition digital formats, movie buffs are being enticed to purchase their favorite movies a third time.

Evan Almighty was produced by Universal Studios, now part of NBC Universal which is mostly owned by GE up 13% over the past year through the end of May. The movie industry has done well over the past year. Walt Disney (DIS) which owns Buena Vista and Miramax is up 17.2%. News Corp (NWS) which owns Fox is up 18.9%. Viacom (VIA/B) which runs Paramount is up 19%. Lionsgate (LGF) is up 24.7%. Time Warner (TWX) which runs Warner Brothers is up 25.6%. And Sony (SNE) which owns Columbia is up 28.3%.

DVD rental companies are not doing so well. Blockbuster (BBI) is down 4.9% and Netflix (NFLX) is down 20.9%. Movie theater companies, however, continue to do well. Regal Entertainment (RGC) is up 25.5% and Carmike Cinemas (CKEC) is up 27.4%.

Today, those regularly attending movie theaters currently represent about 9% of the population, down from 60% back in the 1940s. With the multiple shots of our Blue Ridge Mountains and the movie’s inclusion of hundreds of locals in the film, I expect the percentages of those who go to see Evan Almighty in Charlottesville will far surpass 60%.

The challenge of remaining a profitable industry is constant for any business. But the demise of the movie theater business has been falsely predicted for several years. Instead, it has turned out to be a 100-year durable business model. While movie rental stores may close in the next decade when in-home digital movie delivery replaces physical rentals, the theater business will survive. Theaters are not primarily selling movie delivery; they are selling a relatively inexpensive way to go some place special with a friend or social group.

Photo is a screen capture of Evan Almighty featuring the author.