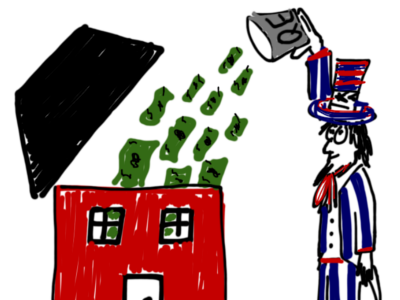 When the Federal Reserve decided to maintain the $85 Billion monthly stimulus at their September policy meeting, they cited elevated mortgage rates as a top concern. Continuing the third round of quantitative easing will offer some relief in the short run but homeowners and potential buyers should not expect recent price recoveries to continue.

Ben Bernanke has good reason to worry about the impact tapering would have on housing. Of the $85 Billion in monthly Federal Reserve purchases launched as part of QE3, $40 billion goes to support housing values by keeping rates low.

The Federal Reserve props up housing values by purchasing mortgage-backed securities (MBS). These securities offer pools of mortgages that have been wrapped together and are guaranteed by the likes of Fannie Mae and Freddie Mac, remember them?

The direct effect of massive MBS purchases is to depress mortgage rates. Housing values rise as more people can afford the mortgage payment which is being subsidized by Uncle Sam’s balance sheet. 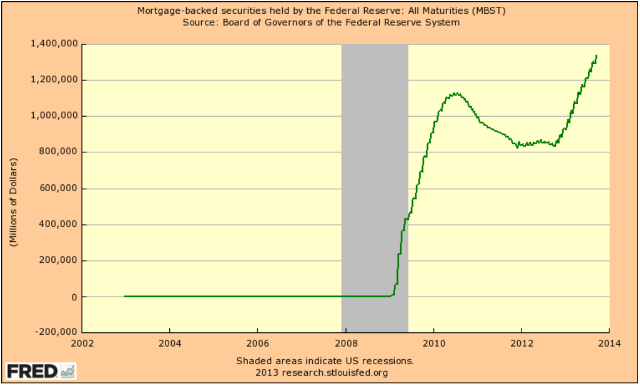 In May 2013, Ben Bernanke introduced “tapering” into the lexicon of Federal Reserve-speak. Immediately following that speech suggesting that there could be a pull back on its massive monthly stimulus plan, the stock market tanked and mortgage rates jumped. After recording a record low of 3.31% in November 2012, mortgage rates jumped up to 4.8% and have hovered around 4.5% ever since Bernanke’s statements.

In July, only a month following Bernanke’s “taper” comment, new home sales plunged 13%. Prior to this recent pull back, home prices were growing by 12.1% according to the Case Shiller 20-city composite index. Several housing economists were starting to use terms like “frothy” and “bubbly” to describe the recent price hikes.

Consider this example for why a prospective buyer would pause when rates jump up. A homeowner shopping for a $500,000 house and making a 20% down payment would have been able to purchase a home in April with a 3.5% rate that offered a $2,317.01 monthly payment (including property taxes). Right now with a 4.42% mortgage rate, the same house would cost 9% more on a monthly-payment basis, or $211.01 more.

Rising mortgage rates curtail some new purchasers but it has the biggest impact on refinances which dry up as rates increase. Only those with impaired credit scores failed to refinance as rates went below 4%. This means that the new issuance of MBS is starting to shrink. $40 billion of monthly MBS Federal Reserve purchases now represents 65% of the marketplace. It’s little wonder that when Uncle Ben mentions tapering, the mortgage market buckles.

The anti-taper decision is a boon for residential housing. It means mortgage rates are expected to maintain and possibly fall in the near future in response to the surprise Fed decision. Many cities will continue to see houses receive many offers within a day or two of being placed on the market.

However, rising prices should begin to concern prospective buyers. Housing affordability hinges on income and mortgage rates. Most buyers finance their purchase and shop for a house based on how much they can afford to pay each month. And while mortgage rates have been artificially dampened, QE efforts have been relatively unsuccessful at increasing average median income.

The incomes of middle class America have fallen sharply at first following the Dot Com crash and more recently during the housing crisis. The following chart shows inflation adjusted median income has fallen 9% in real dollars since 1999. 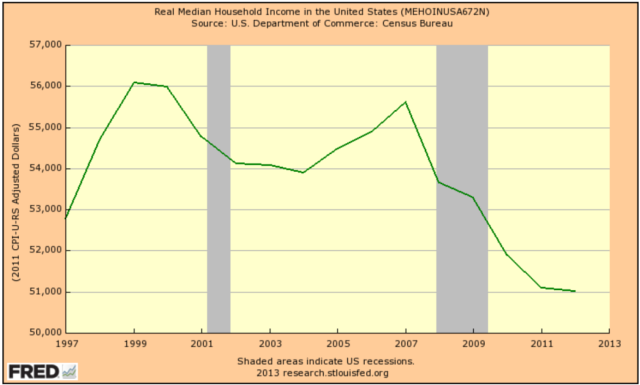 If middle class American incomes do not recover, and mortgage rates rise, homeowners have little reason to expect home prices to rise over time.

Not one of these three dissenting Federal Reserve members holds a voting position on the Federal Reserve this year. But, those entering the housing market should be ask themselves, when the Fed stops purchasing 30-year mortgage bonds from Fannie Mae and Freddie Mac, what will happen to mortgage rates?

More importantly, homeowners should remember the one positive lesson that came out of the Great Recession. Your home is not an investment. It’s a roof over your head. It’s a place to welcome friends and family. It’s an expression of your personality. It’s likely the largest purchase you will ever make. But it is not an investment.