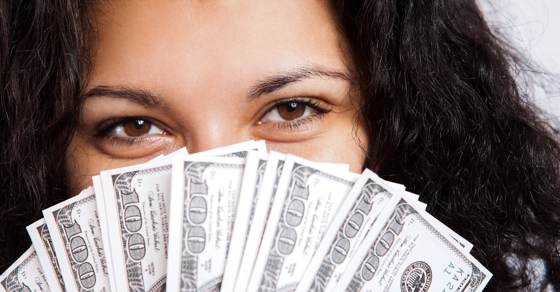 It is a weighted measure using the dollar’s movements relative to other select currencies in an attempt to represent our major trading partners. The current mix is approximately:

The basket was altered in 1999 when the Euro replaced several European currencies. It still includes the Swedish krona and the Swiss franc despite the fact that China, Mexico, and South Korea are more important trading partners.

In “The Success of Freedom Investing” we wrote:

Here is how the U.S. Dollar Index numbers can be computed:

The Dollar Index Spot (DXY) is computed each day and available at MarketWatch and other sites.

And here is the historical quote for the end of 2014: 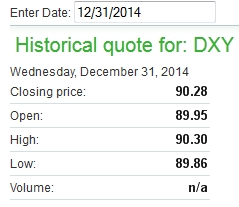 For consistency, it is normal to use the closing values for comparison.

In order to get an intuitive sense of why these two percentages are different, if the dollar appreciates 100% (doubling in value) that means that foreign currencies would only lose 50% of their value. Since one is the inverse of the other, the numbers are slightly different. Here is how to compute how much value foreign currencies lost:

Over 2014 foreign currencies lost an average of 11.34% according to the U.S. Dollar Index.