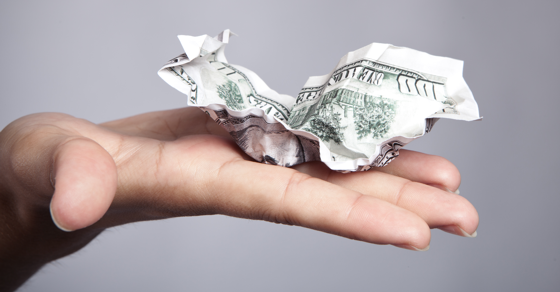 In “What Exactly Is Quantitative Easing?” we wrote:

In 2013, the debt grew by 5.6% while the currency was devalued by at least 4.1% (GDP growth plus official inflation rate). This means the government effectively pardoned 77.3% of the 2013 debt increase, paid for by using your former purchasing power.

Normally, currency can be increased by GDP growth without increasing prices, creating inflation. The extra dollars are necessary to handle the new transactions in a growing economy. If GDP grew but the currency did not, we could have deflation. Thus, an increase in the money supply equal to GDP growth would likely have little effect on prices. Inflation, the rate at which prices increase, happens when there is an additional increase in the money supply over GDP growth.

Thus, the rate at which the currency is devalued is approximately the GDP growth rate plus the inflation rate. In 2013, this would be 1.47% official inflation plus 2.6% estimated GDP growth, or 4.07%.

The federal debt growth rate over the same year was 5.6%.

At the same time, they devalued the currency by 4.1%, meaning only 95.9% of the value of the January 2013 dollar remains at the end of December.