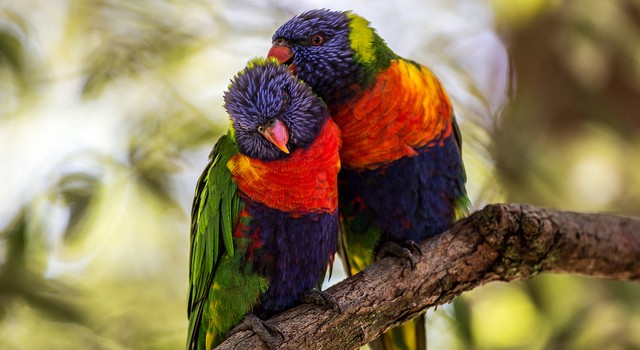 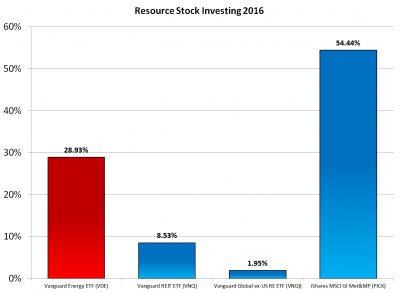 These returns contributed to the Resource stock asset class being the highest-performing for 2016 after being the worst-performing during the prior 2015 calendar year.

Although resource stocks have been volatile, volatility in an individual component of your portfolio allocation is something which can both boost returns as well as decrease the volatility of the portfolio as a whole.

In fact, the bonus gained by rebalancing between portfolio components is dependent on two things: low correlation and high volatility. Stated another way, the higher the individual volatility of each component in your portfolio, the greater the bonus you gain by regular rebalancing.

Imagine you split your portfolio between two S&P 500 funds. No matter how volatile they are, they will move in sync and money moved between them would not experience a different return. But when you have assets which don’t move in sync with one another as measured by the lack of correlation in their movements, then there is an opportunity to gain by moving out of one which has just gone up and into one which has just gone down. We wrote an article entitled “Do Resource Stocks Deserve Their Own Asset Class?” on how Resource stocks have some of the lowest correlations to both other asset classes and even among the sectors that comprise the Resource stock asset class itself.

Similarly, imagine you split your portfolio into components with a very low volatility. The potential for gains by moving in or out of any category would be small. But if only some of the components in your portfolio have volatile movements then you will be rebalancing and regularly buying low and selling high. We also wrote an article entitled “The Case for Investing in Energy Companies” which showed how despite energy stocks having a greater volatility than the S&P 500, a blended portfolio of both energy and the S&P 500 can produce a portfolio with a much lower volatility than either.

Investors are often disappointed by a single component of their portfolio which is down when everything else is up, but this volatility and lack of correlation is what boosts returns when you rebalance.

And those investors patient and diligent enough to stay the course and rebalance their portfolios last year were rewarded with better returns this year.