Government officials call this process [printing money] “quantitative easing.” They argue that consistent deficits are good for the economy. If we were only willing to go high enough, they claim the deficits could solve our economic woes. The Federal Reserve has been printing $85 billion a month.

Quantitative Easing is the Federal Reserve purchasing bonds and mortgages and mortgage-backed securities for “economic purposes.” Their economic purposes though may be anything: to take toxic assets off the books of banks, to purchase government backed debt in order to keep the interest rate of government backed debt low, or simply to flood the markets with extra cash.

I wrote that the Federal Reserve has been printing $85 billion a month. They are gradually “tapering ” quantitative easing. That doesn’t mean they stop spending and acquiring Treasuries but rather that they are slowing the rate of purchasing. The rate of purchasing is now around $65 billion. That’s down from a trillion dollars every 12 months to a trillion dollars every 15 months.

MarketWatch has a nice history of quantitative easing and how it effected the markets in an interactive graph:

The Federal Reserve’s accounting is not public knowledge hence the calls for auditing the Fed. Speculation abounds. Here is one site’s attempt to show the growing balance sheet of the Fed: 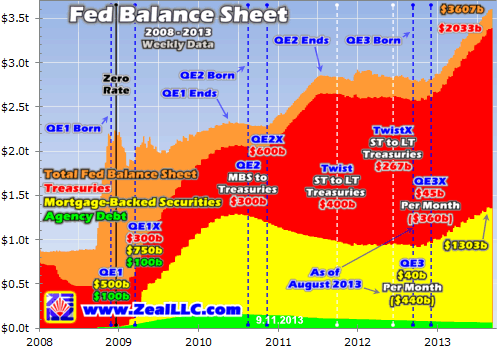 As you can see, the Federal Reserve now owns a significant amount of our own Treasury debt.

It also own a significant amount of the mortgage market as seen on this blog’s chart: 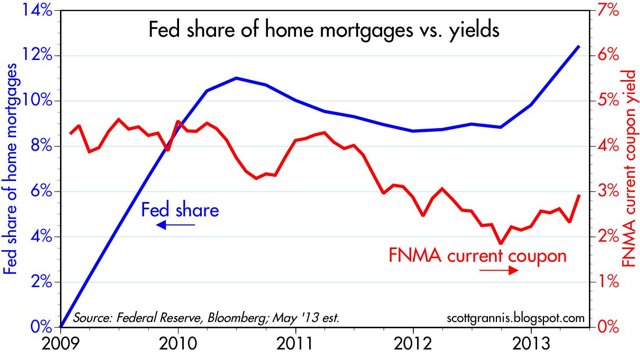 Again, all of this helps make the point that your financial plan needs to take into account the danger of keeping too much of your wealth in cash.