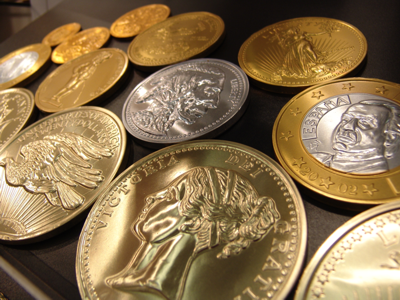 I’ve written previously about investing in precious metals such as gold or silver so it was with interest that I read “Investing In Gold” by Tuscon Financial Planner Bill Holliday. After making a distinction between interest in gold from perpetual doomsayers and from modern investors who turn to gold as a defensive investment when the economy is poor he goes on to say:

With ongoing concerns about the global financial system and gold hitting a record high, many people are interested in this ¨safe haven.¨ However, commodities (such as gold) are a very volatile investment subject to supply and demand pressures that cause the price to fluctuate greatly. Gold is used sparingly in jewelry, dentistry and some limited industrial areas, so unlike most other commodities, its value is not supported by uses other than as a default currency. Gold fell more than 71% over the course of 19 years from its previous inflation-fueled spike in 1980. Most financial experts suggest that an individual should not have more than 5 percent of their assets in gold.

There are few investors who would stomach a 71% drop in their investment over the course of two decades. We’ve all seen the ads saying, GOLD HAS NEVER BEEN WORTH ZERO! But then the S&P 500 has never been worth zero either. And THE S&P 500 HAS NEVER DROPPED 71% OF ITS VALUE OVER A 19-YEAR PERIOD.

Gold-bugs argue that gold is a safer store of value than fiat dollars. Fair enough. I concede that gold, on average, keeps pace with inflation while dollars do not. But for a safe store of value, I would prefer my wealth to be invested in something which meets these criteria:

Gold satisfies the first criteria, but fails the other three. Here is part of Bill Holiday’s article:

There are several issues with taking physical possession of gold: transaction costs, storage, insurance, dealer integrity, and shipping. Expect to pay about 6% to 10% above spot market prices, which you can find at www.kitco.com, for the transaction cost.

Holding gold in an ETF rather than owning physical gold helps solve #2 and #4, but any holding of gold has other problems. Again from Holiday’s article:

There are tax issues with ETFs. Any gains from those that directly own gold are taxed at the 28% rate for collectibles, the same as for coins and bullion. They may also have gains from trading gold within the fund which creates taxable income for investors even though the income is not distributed.

All good reasons that an individual should not have more than 5 percent of their assets in gold.