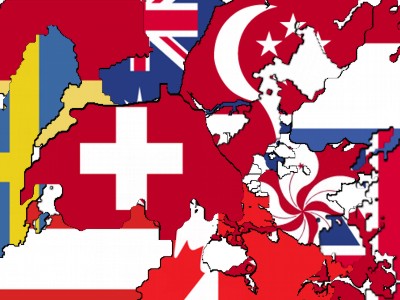 You can both diversify for safety and boost your returns by adding international investments to your portfolio. In the past year, international stocks performed 2.5% better than U.S. stocks. And developed countries with the most economic freedom returned an additional 4.4% more than the international index.

None of these returns, however, were positive. During the one-year period ending June 30, 2008, the S&P 500 index lost 13.12%. The MSCI EAFE Index of international developed markets lost 10.6% (in U.S. dollars). Significantly, 10 of the most economically free countries only lost 6.2%.

Put some money into the “emerging markets” category, and you can gain even greater diversification and returns. Emerging markets, as measured by the MSCI Emerging Markets Index, actually gained, appreciating 4.6% (in U.S. dollars) in the past year. They have averaged a whopping 29.8% over the past five years. Of course, there is a caveat: emerging markets are inherently more volatile than the markets of more developed nations.

If you have a very small account, investing in one good international fund is sufficient. For slightly larger amounts, a savvy asset allocation might be to invest two thirds in the MSCI EAFE Index and one third in the MSCI Emerging Markets Index. Using this technique, you would have only lost 5.5% in the past year and averaged 21.0% over the past five years.

Since 1994, the Heritage Foundation Index of Economic Freedom has used a systematic empirical measurement of economic freedom in countries worldwide. Their conclusions clearly show that economic freedom and higher rates of long-term economic growth go together. Investors can use the study to select countries for their foreign stock allocation.

According to the Heritage Foundation, “Economic freedom is defined as the absence of government coercion or constraint on the production, distribution, or consumption of goods and services beyond the extent necessary for citizens to protect and maintain liberty itself. In other words, people are free to work, produce, consume, and invest in the ways they feel are most productive.”

A number of the countries ranked high in economic freedom have exchange-traded funds (ETFs), such as Hong Kong, Singapore, Australia, Canada, Switzerland, the United Kingdom, the Netherlands, Germany, Sweden, and Austria. These funds track each country’s market index and offer a convenient and inexpensive way to invest there. ETFs combine the liquidity of individual stocks with the diversification of an index fund. They also typically carry lower expense ratios than most mutual funds.

For larger accounts, we recommend you invest half of your assets using the simple technique just described. A third is invested in the MSCI EAFE Index fund and a sixth in the MSCI Emerging Markets Index fund. The other half is divided among the 10 countries with the most freedom whose markets also accommodate a country-specific ETF.

Canada had the best returns over the past year, mostly because of its emphasis on energy stocks, earning 13.9%. In the same time period, 8 of the 10 countries cited earlier beat the broad MSCI EAFE Index. Only two, the United Kingdom and Sweden, fell short.

Japan, with the world’s second largest economy, has demonstrated more financial freedom in recent years. But government spending is greater than a third of its gross domestic product and a large number of legal restrictions on capital make investing in Japan quite problematic. It is ranked below-average in government size and financial freedom and lower than we would recommend in the important investment freedom category. These restrictions push the country down to the 17th most free economy. We can attribute Japan’s malaise after its own stock market bubble to its lack of economic freedom and the government’s overly aggressive interventions. Former prime minister Junichiro Koizumi’s changes made the country a more attractive place to do business. It remains to be seen if these changes are significant enough.

Diversifying your foreign investments is just one critical element of an optimal asset allocation. Building balanced portfolios that are more likely to meet your financial goals doesn’t happen by accident or by working with someone whose interests are in conflict with yours. Visit the website of the National Association of Personal Financial Advisors at www.napfa.org or call 1-800-366-2732 to find a fee-only advisor in your area.