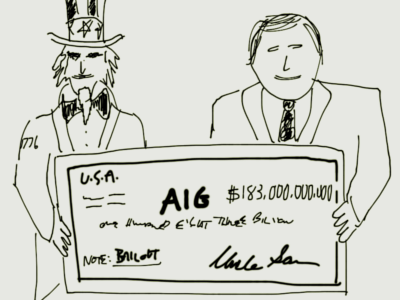 According to AIG and the Treasury Department, we should all be applauding the grand success of the massive bailouts. However, few outside of Washington or AIG’s imposing Wall Street headquarters are celebrating. The AIG bailouts, and there were many, left our economy more vulnerable and American taxpayers poorer than before.

The recent AIG marketing campaign makes my skin crawl. In what they are calling “America’s Profit,“ AIG boasts that repayment of the bailouts created a positive return for taxpayers. Making such claims after the largest bailout in American history deserves a review.

Sheila Bair, former FDIC chair, shares in her recent book, Bull by the Horns, that AIG and several other large financial firms were insolvent and should have been put into a bankruptcy resolution process. This process is used regularly to rescue failing banks and would have allowed stronger and better managed companies to take over operations of AIG without the need for massive bailouts from the government.

My favorite chapter in Bair’s book is called Bailing Out the Boneheads, which I’ve borrowed for the title of this column. How else can you describe the leaders of a company who would endorse massive employee bonuses and plush “reward” trips immediately after being bailed out by American taxpayers? Bair asks an important question. In bailing out AIG, what system did we save?

These bailouts so infuriated the American public that two populist political movements were energized. Like brothers who constantly bicker, neither side of the aisle was able to recognize their common bond. Crony capitalism and political corruption are alive and well in a post-bailout world. But the passion of the American public is dissolving and along with it, the hope of a future that protects Main Street from the excesses of Wall Street.

Imagine if instead of bailing out the largest and most politically connected financial firms, how many smaller businesses and households could have survived intact if the federal government had instead offered them unlimited access to capital.

To further explore this thought experiment, imagine that if instead of bailing out AIG, this same money had been invested across all American businesses during the financial crisis. For comparison, we can invest this same capital in the Vanguard Total Stock Market Index (VTSAX). This fund is designed to represent the returns of the entire U.S. equity market including small-, mid- and large-cap stocks.

AIG boasts that after being lent $182.3 billion by the Fed and U.S. Treasury at very favorable terms, their repayment to Uncle Sam included $22.7 billion of realized gains. In reality, this gain is entirely wiped out after subtracting the cost of tax deductions awarded to AIG by the Treasury through some creative accounting. For now, I will stick to the story that AIG and the Treasury are marketing.

Although $22.7 billion may be beyond our comprehension, compare it to the $85.5 billion that would have been realized had this same money been invested across all the companies in the Total Stock Market Index. The return on investment would have been nearly four times what we received back from AIG. Which “profit” would you rather have? 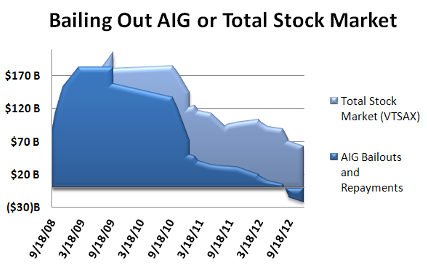 The dark blue area in the chart represents Uncle Sam’s investment in AIG that began on September 18, 2008. The small negative number at the end represents the $22.7 billion gain when the Treasury liquidated its final shares of AIG stock in December 2012. For over two years, the U.S. government held as much as 92% of AIG’s stock.

The lighter blue area represents that market value of this same investment in the Vanguard Total Stock Market Index (VTSAX). If this investment had been made into VTSAX, the U.S. taxpayer would have received $22.7 billion in realized gains and would be holding an additional $62.8 billion portfolio that had not yet been sold. You can view this $62.8 billion as the opportunity cost of bailing out AIG.

I acknowledge that comparing these two investment options overlooks an important perspective. The real comparison is not between bailing out Wall Street or investing in the rest of the economy. The real comparison is between current consumption and future opportunities. Because we have not repaid a penny on this additional borrowing, future generations will pay the price. Poor stewardship of our national resources will inevitably leave our children and grandchildren with a less secure financial future.

I am quite sure that inflamed passions are dissipating because most average Americans feel helpless. What can we do? I suggest you begin by reading Sheila Bair’s book. Pay specific attention to the commonsense reforms she recommends in the last chapter, “How Main Street Can Tame Wall Street.” Included in these recommendations are abolishing Fannie Mae and Freddie Mac, substituting a web of complex bank regulations with more conservative capital requirements, and breaking up the too-big-to-fail mega-institutions. Radical steps must be taken in order to regain financial responsibility. Perhaps the best thing you will get out of reading a historical account of the bailouts is something that you knew all along but just needed a more authoritative source to confirm: it could have been different.