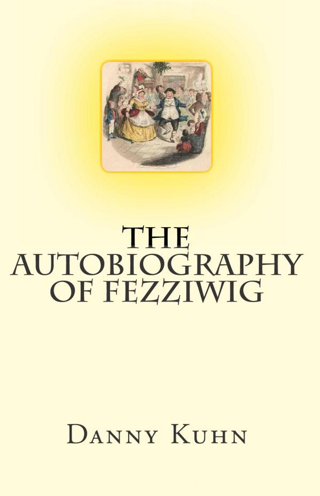 Faithful readers of this blog know that I am a fan of Dicken’s A Christmas Carol and the financial lessons which can be learned from it. Fezziwig has always been one of my favorite characters from the book, so I was especially interested when Danny Kuhn, the author of The Autobiography of Fezziwig, contacted me. I read Kuhn’s book over the Summer and have been holding this interview for the Christmas Season. I highly recommend it for anyone who enjoyed the original story. Here is the interview with Danny Kuhn:

What will readers learn in your book?

I am particularly proud of the historical accuracy in the novel. Almost every character apart from the principals are real, doing exactly what they did in the correct time and place. From the shopkeeper whose office burned in colonial Charleston to the woman hung for her crimes in the London streets to the doctor who examined an ancient corpse in Lincolnshire to the worker grinding deer antlers in Fezziwig’s warehouse, they are real, and so much more interesting than any I could have invented. So many of the events, especially riots and persecutions, are almost forgotten today, but still have great relevance.

How did you come to write this book?

I have been a fan of Dickens since I was a boy. As I grew up on a small farm in southern West Virginia, his books transported me to another time and place, and helped form my conscious. A Christmas Carol is probably one of the best known stories in the English language, and Fezziwig is a beloved character. Several years ago, during my annual rereading of the novella, I envisioned the warehouse celebration as always, but, for some reason, started playing with dates in my mind. If the action of A Christmas Carol took place around 1843, and the warehouse scene was from when Scrooge was a very young man, during what time would Old Fezziwig have lived? What was England like during that time? Who else was about? The answers are extraordinary. It is perfectly plausible that a businessman of that time could interact with so many of the shapers of modern thought, geniuses of science, literature, and philosophy.

What authors inspired you to write this book?

Dickens, naturally. While the language isn’t ‘Dickensian,’ I hope the spirit is. Also obvious, Benjamin Franklin in his Autobiography and letters. His disappointment in his post-revolution relationship with his son is evident. It seems that novels about historical characters are quite popular right now, especially if they are hunting zombies or vampires. I wanted to write something totally believable as autobiography, even considering the occasional apparition.

Most successful writers say that while everyone wants to write, few are willing to spend the hours learning the craft of writing. They think if it did not come easy they can’t become good. How did you put in the time learning the craft?

During my career with the federal court, most of my time was spent writing. I found a system drowning in overblown language. It was part of my mission to teach my peers to write simply and clearly, and I still do that kind of training now that I have retired. This 95,000 word novel took exactly two months to write, but those two months were obsessive. I have the great advantage to be (mostly) retired, and have an understanding spouse who still has a day job! But, for working stiffs, the old cliche holds true: write a page a day, and, this time next year, you have a book!

You’ve had many years of experience with money. What is one of your favorite things that you’ve been able to do with your money?

I retired at age 51, and moved to the beach. I was blessed to have a job that allowed me to do that, and I realize it is a rare thing. While I was working, it allowed me to give my two daughters a great gift: Travel. It changes you. As I grew up, my horizons were broadened by books. Theirs was broadened by books, and by seeing much of the world. They did not get new cars when they graduated. They had after-school jobs. But, they had been to Europe and the Caribbean several times by the time they graduated, and our family vacations always included historical sites.

What a common mistake you see people make with money?

I had many colleagues who didn’t contribute enough to their TSP (the Fed’s 401 (k) plan) to receive the maximum employer match. I heard so many excuses. They’re handing you FREE MONEY, man! Take it!

What life lessons do you think we learn from Fezziwig?

Many of the lessons are economic. From the Christmas party scene, one might think Fezziwig was a generous employer just because of his kind spirit. He had that, yes, but finds that employee development and cross-training (as we would call it today) actually profited him in the long run. He believes that he deserves a good life from his hard work, and that he can’t help anyone by going out of business. He knows the betterment of mankind is his responsibility, and is smart enough to find a win-win. Also, he learns early that complacency and greed are the two enemies of successful commerce.

Nothing bad, thankfully. I weathered the death of a spouse years ago, and, like Fezziwig, was frustrated by the duel need to help my loved ones through their grief while dealing with my own. My daughters are now launched and doing well, I’m remarried, and financially secure. Writing helps me think of my legacy. When I’m in the midst of it, though, it’s hard to turn off at night and sleep instead of thinking about the next plot turn!

Writing, biking, and family. Even in retirement (though, at 54, younger than most retired folk), I have to have a mental list every day, and still feel satisfaction in ticking items off of it.

Who would you have play Fezziwig in the movie?

Talk about a dream come true! Since the book takes place over a period of 80 years and the characters age, it’s hard to choose, even with by Hollywood standards. I would see young Fezziwig played by Daniel Radcliffe, and young Caddy by Karen Gillan, or perhaps Andrea Riseborough if portrayed a bit older. Russell Crow would be a great Lawrence Washington, I think. The only one I’m certain of is Mr. Whitlipped. It would have to be Patrick Stewart! 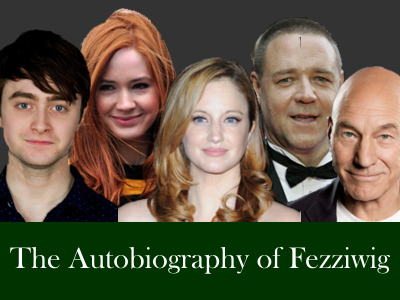