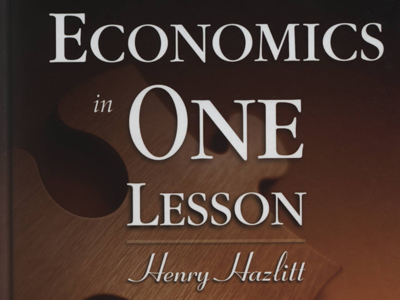 This was in the Notable & Quotable section of last Wednesday’s Wall Street Journal:

From “Economics in One Lesson” by Henry Hazlitt, 1946:

There is a strange idea abroad, held by all monetary cranks, that credit is something a banker gives to a man. Credit, on the contrary, is something a man already has. He has it, perhaps, because he already has marketable assets of a greater cash value than the loan for which he is asking. Or he has it because his character and past record have earned it. He brings it into the bank with him. That is why the banker makes him the loan. The banker is not giving something for nothing. He feels assured of repayment. He is merely exchanging a more liquid form of asset or credit for a less liquid form. . . .

Now it is to A, let us say, who has credit, that the banker would make his loan. But the government goes into the lending business in a charitable frame of mind because, as we saw, it is worried about B. B cannot get a mortgage or other loans from private lenders because he does not have credit with them. He has no savings; he has no impressive record as a good farmer; he is perhaps at the moment on relief. Why not, say the advocates of government credit, make him a useful and productive member of society by lending him enough for a farm and a mule or tractor and setting him up in business?

Perhaps in an individual case it may work out all right. But it is obvious that in general the people selected by these government standards will be poorer risks than the people selected by private standards. More money will be lost by loans to them. . . . [T]he recipients of government credit will get their farms and tractors at the expense of what otherwise would have been the recipients of private credit.

“Economics in One Lesson” by Henry Hazlitt is one of the classics which should be required reading before voting. It is interesting to see that he knew more in 1946 than the politicians of our age.