The first factor, beta, taught us that the riskier, more volatile stocks on average have better returns. These same stocks, however, lose more value when the market is declining. We also learned there is no such thing as a safe investment that pays market rates of return.

These absolute dollar amounts have gradually increased as the total U.S. market capitalization has grown. The analysis that Eugene Fama presented during our conference last fall analyzed returns of the U.S. markets from 1927 through 2010. He analyzed each decile from the largest 10% of the market through the smallest micro-cap. The results were remarkable. 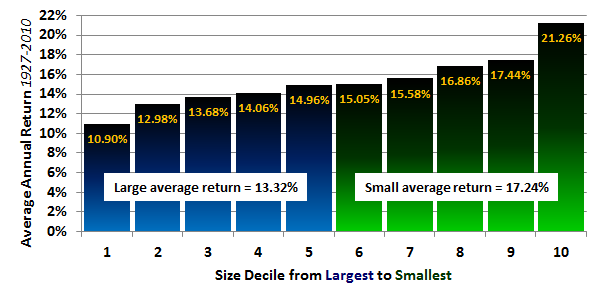 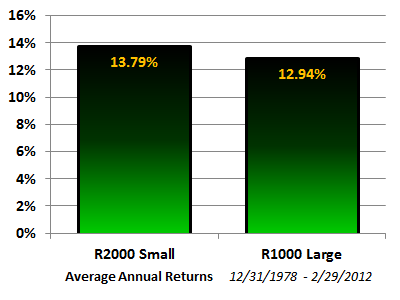 There are many explanations why small firms tend to outperform large firms. First, their share price is more volatile. They have a higher standard deviation that often moves in sync with the markets producing a higher beta. Thus a portion of their excess return is explained by the first factor, beta.

Small companies are more likely to pay no or smaller dividends. Large cap is currently paying a 1.77% yield while small cap is only paying 1.27%. This is partly because smaller companies need to use the income to grow, whereas larger companies often have nothing better to do with earnings than return them to the shareholders.

The stock of smaller companies are more thinly traded. This means that a single investor can move the stock markets higher by buying and lower by selling. This is part of what makes small-cap stocks more volatile. Part of the excess return of small caps is dampened by the costs of getting in and out of the market moving the market.

When buying or selling small-cap individual stocks, it is important to put in limit orders so a purchase of a given number of shares does not move the market upward and you do not spend more than you had intended. Similarly, using a limit order when selling ensures that you get a fair value for the shares you are offering.

The conclusion from this study suggests that over time small cap will outperform large cap even after factoring out measurements of volatility. In future columns we will look at other factors of investing as well as indicators that suggest times to tilt even more small or back toward large cap. But for now, we can add size as another factor in expected equity returns.