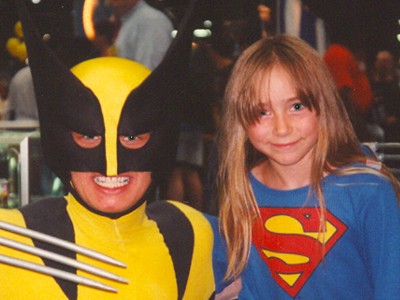 In the boy’s section of Toys ‘R’ Us, there was an entire aisle of the Marvel action figures. As the youngest child of a family of Marvel comics fans, this aisle was among my favorite three. My brother and I had a common understanding that he was responsible for purchasing the best heroes and I was responsible for purchasing the best heroines so that we could act out entire stories. Approximately once a month, a few new heroes would be added to the shelves and, at that time, other figures would be retired from sale. This made the expensive figures limited edition and purchasing them, especially the female characters that only graced the shelves on rare occurrences, quite difficult.

Luckily for me and for my financial lessons, my parents did enable me to make this decision. I had a weekly wage, which I earned from doing chores, and, as I walked through the aisles, it was that money in my pocket that I could use to acquire the toys.

“Can I buy that one, Dad? Can I?” I would beg and plead, gesturing to a heroine perfect for our storytelling games.

Rather than making a parental verdict, my father would get as excited as I was and respond enthusiastically, “Can you, Megan?! How much money do you have?”

I remember my eyes would light up as I realized that I was my own decision-maker at this point. It was my pockets that would deal the verdict. I tore into my stashes, sitting down on the floor and hoping I would count all the way up to the price tag.

With my small wages, I often did not make it all the way to the fifteen or so dollars it took to buy the toys I wanted. However, on these occasions, my parents would encourage me to save up for it. I still remember the day that I found enough money to buy the limited edition Psylocke action figure, a toy I cherished in future story telling activities because of her bendable wrists and ankles.

On another occasion, my mother tells me that I pointed to a toy asking, “Can we get it, Mom?”

“You have enough money, Megan,” she responded with a smile, hoping this would ignite my financial responsibility and enable me in my purchase like it had done on so many other occasions.

“I don’t want it enough to buy it with my money,” I responded plainly, “only your money.”

If my parents had been in control of the purse strings, I would not have learned the value of money. If they had been in control, I would have had nothing without buying the toy, so of course I would beg my mother to buy me it. However, when the money was in my pockets, I had purchasing power and the ability to have any toy I want, and, with the toy, I only had the toy. Suddenly, I knew that twenty dollars could buy me many things but one X-Men action figure could buy me nothing else. As a result, I learned early on that money was something worth saving for just the right purchase, not just every impulsive whim.

To a child, “My Money” is valuable where “Your Money” is worthless.