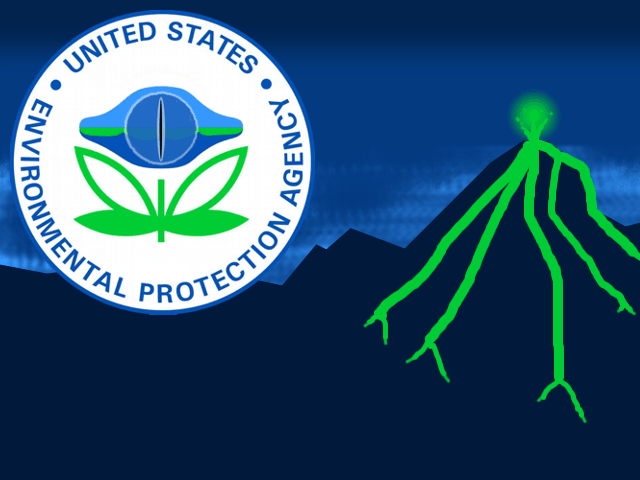 The U.S. Environmental Protection Agency (EPA) wants to vastly expand its power. Last year, the agency paid nearly $700,000 to the National Academy of Sciences to draft the document “Sustainability and the U.S. EPA.” This manifesto rationalizes why the EPA has the right to regulate every business, community and ecosystem in the country.

The key to the EPA’s regulatory control is “sustainability,” an illusive and ill-defined term even more broadly applicable than the interstate commerce clause. According to the EPA’s website, “Sustainability is based on a simple principle: Everything that we need for our survival and well-being depends, either directly or indirectly, on our natural environment. Sustainability creates and maintains the conditions under which humans and nature can exist in productive harmony, that permit fulfilling the social, economic and other requirements of present and future generations.”

What can the EPA therefore regulate? Everything. Because everything depends on our natural environment. Can you use that? Not if we decide some other use is more important. What if my claim is most important? The EPA can decide that future generations have an even more critical claim. Are humans important? Yes, but no more important than nature, and it is our purview to speak for nature and adjudicate dispute so that both can exist in productive harmony.

One of my undergraduate degrees at Stanford was in philosophy. There I enjoyed studying not only logic, but also logical fallacies. The EPA’s regulatory reach is based on several fallacious assumptions.

In other words, the way to avoid disastrous consequences where we don’t have control is to control everything. “Our solution to a problem must not only solve the problem at hand, but it also must not create a new problem as a result” (EPA “Science Matters” newsletter).

This is an admirable goal, but it misses the point. Often this means you shouldn’t try to “solve” the original problem. Distributed natural systems respond faster, better and smarter than government regulations. This is as true of physics and biology as it is of the free markets.

This libertarian approach of doing nothing frustrates and maddens many who cry, “Do something!” and “There ought to be a law!”

A different and more humble vision of the world distrusts the ability of specialists to manage and control the effects and unintended consequences of regulating complex systems. Knowledge distributed diffusely throughout a system has the benefit of multiple checks and balances and offers negative feedback and self-regulation. Nature is not organized. It does not require centralized planning. It is an organism, and if we learn anything from nature it ought to be the incredible resiliency of distributed systems. Nature, like the free markets, works best when diversity is not spoiled by a single government agency’s ability to set policy unilaterally for everyone.

Second, the EPA’s approach ignores the fact that power and selfishness always corrupt those altruistic public servants they assume will act with wisdom and objectivity. We must learn from history and current events that every political experiment testing the altruism of public servants has come up negative.

Further empowering the EPA is a move in the wrong direction. EPA’s nameless and faceless bureaucrats are completely disconnected from any dependence on the people. Delegating regulatory authority to a concept as legislatively vague as sustainability ensures no control can ever be exercised. It is a move toward the post-democracy of the European Union.

Agencies can make powerful pronouncements that have the effect of absolute law. Meanwhile any criticisms can be deflected as the abuses of a limited number of individuals. And every crisis provides cause to ask for more control and oversight, not less.

Finally, regulation is a hidden tax burden. Its costs are never seen in the taxes collected or even in the country’s runaway spending. It is factored into the cost of all the goods and services you buy. And when regulatory burdens increase, the price you pay goes up as well.

The extension of the EPA’s mandate is not primarily an environmental issue. It is an authoritarian control issue. People will have dominion over the earth. The only issue is if that dominion will be in the hands of EPA bureaucrats and infringe on people’s freedoms.

Virginia Democrat senators Jim Webb and Mark Warner signed a bipartisan letter to the EPA supporting a temporary waiver of federal ethanol mandates. The Renewable Fuel Standard currently requires transportation fuel to contain certain amounts of renewables such as corn grain ethanol regardless of how high it pushes corn prices or how much weather conditions or tariffs on imported ethanol have reduced supplies.

Also in Virginia a federal judge ruled that the EPA did not have the authority to declare storm water a pollutant. Arguing that if Congress did not explicitly prohibit its authority it could act to regulate anything, the EPA subsequently lost its legal attempt at naturarchy, seizing absolute power in the name of nature. Republican attorney general Ken Cuccinelli was joined by the Democratic Fairfax County Board of Supervisors in opposing the EPA.

Pollutants subject to EPA regulation are explicitly listed in legislation. Rainwater and carbon dioxide are not among them. We cannot afford to cede absolute authority to a government agency.

Environmentalism is not an absolute value. Each of us has a personal responsibility to be prudent, productive and efficient stewards of the world’s natural resources. This includes conservation to temper our development and use. And it includes the common goals of preserving the environment and reducing pollution. Every political party agrees.

But these efforts should not include using godlike scientific claims to justify godlike regulatory oversight. Stewardship suggests limits on how people ought to rule over their environment. It is not a justification for bureaucrats’ limitless rule over people.