In a June 29, 2018 press release, the Internal Review Service came out with an early preview of next year’s Form 1040. They say “The new form consolidates the three versions of the 1040 into one simple form.” and “Taxpayers with straightforward tax situations would only need to file this new 1040 with no additional schedules.”

In reality this new update is not much of a simplification though. Here is a screenshot of the relevant page of the draft: 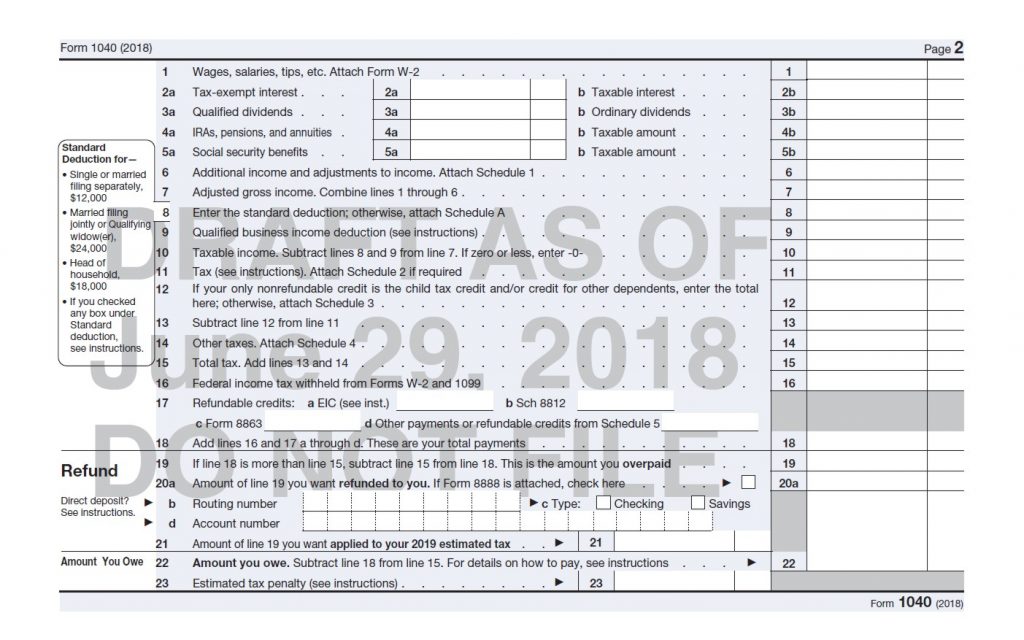 Many productive members of society are a savvy investors who owns their own business, have IRAs in addition to 401(k) plans and sometimes pensions, and are still working into their 70s, meaning they have both RMDs and Social Security. This stereotypical person pays most of the tax both because they make the most and because the progressive tax code taxes their additional dollars earned at a higher rate.

Although this IRS form looks simpler at first glance, it is actually more complicated for the people who are paying the most taxes.

Business income, capital gains, all personal above the line deductions, and more seem to be relegated to a Schedule 1. Each of those types are then split out into yet more schedules as they were in previous years: Schedule C Profit or Loss From Business, Schedule D Capital Gains and Losses, etc. Making more room for error, not less.

Meanwhile, the “qualified business income deduction” is not on Schedule 1 (because it is below the line) making it oddly separated from the rest of business reporting.

Then, there are IRA distributions, pension or employer-sponsored retirement plans, and annuities which are all lumped together into Line 4. This requires more off-form back-of-the-napkin math to get the right numbers in those boxes than previous 1040s as it guarantees that owners of all types must add those types together before they can fill out the form.

“Other Taxes” like the Net Investment Income Tax (NIIT) or the Additional Medicare Tax are on yet another schedule, Schedule 4.

Calculating the tax you owe, arguably the most complicated part of the form, is still just the hellish “Tax (see instructions)” where the instructions are still probably the confusing Qualified Dividends and Capital Gains Worksheet. Although it has the promise of “Attach Schedule 2 if required,” Schedule 2 has been announced to be “the tax on a child’s unearned income (commonly called the kiddie tax), the alternative minimum tax, and any excess premium tax credit that must be refunded .”

The productive pay estimated taxes, which are not even mentioned on this form. They are part of the hard to spot “Other payments or refundable credits from Schedule 5.”

Then, to add insult to injury, they have decreased the font size of “Amount You Owe.” It used to be the same size as “Refund,” but now it is smaller. There is no practical reason to decreased the font size; the section has the same number of lines as it had before. Now, it looks like the last section is “Refund” as though this is a form where they are paying you and not the other way around.

France’s Louis XIV’s finance minister Colbert is quoted as saying, “The art of taxation consists of so plucking the goose as to obtain the largest possible amount of feathers with the smallest amount of hissing.” Although this quote comes from France, it may as well be the IRS’s mission statement.

Most of your tax bill is quietly taken from you throughout the year. If your withholding is known to be insufficient, then you are expected to pay estimated taxes in four installments, making each one emotionally more manageable. By the time April 15 rolls around, you only pay a small percentage of your total bill. The price tag on your tax return is a finger, compared to the whole arm you lost over the course of the year.

Although this 1040 looks smaller, it is not simpler for anyone except for the IRS. Now the IRS does not have to support three 1040s, only one. Meanwhile, they are effectively forcing everyone to file their return on the 1040-EZ, no matter how complicated their case. They are also require many taxpayers to file and learn several new schedules.