Kenneth G. Elzinga is both a nationally renowned economist as well as a locally celebrated professor here in Charlottesville at the University of Virginia.

His latest book, under the pen name of Marshall Jevons, is The Mystery of the Invisible Hand. In this novel Henry Spearman finds himself in the world of art and academics and is challenged to use his economic principles to solve a murder mystery. Here is an excerpt from the book: 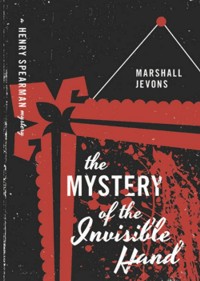 The committee members completed their deliberations in the late morning and elected to have lunch together at the faculty club. The food at the club would trump the doughnuts that had passed for breakfast. As the group walked across campus, they passed one of the university’s largest buildings. A granite sign in front of the entrance read “Andrew Crampton Library.”

“So, I wonder who Andrew Crampton was?” Battles asked. There was no immediate reply to his question. As the faculty member with the longest tenure, Abraham felt obliged to at least respond to Battles, even though he was mildly embarrassed by the only thing he could offer. “I’m not sure,” he said, looking back at the building as if another glance at the familiar structure might give him a clue about its provenance. Turning again to Battles and the others he admitted, “I don’t know, even though I’ve been at Monte Vista for year and been in that building hundreds of times.”

“I think I can answer that question,” Spearman volunteered. The group looked at him in surprise. Clearly enjoying the moment, he continued. “I realize I’m a newcomer to campus, but I believe Crampton was a writer.”

“A writer, you say?” Cavanaugh queried. “I don’t pretend to know all of the English canon, but I’ve never heard of a writer named Crampton. What on earth did he write?”

Spearman paused before answering and then said, “He wrote a check.”

Cavanaugh looked puzzled. “Crampton wrote a check, you say?” Watching both the twinkle in Spearman’s eyes and the frown on Cavanaugh’s forehead, the other committee members struggled not to laugh out loud.

“Yes. I suspect he wrote a check to Monte Vista University – and I imagine that what Crampton wrote got great reviews here.”

Cavanaugh had walked several places when a smile replaced his puzzled frown. “Oh, yes, yes. I see. The man wrote a check, you say. You mean Crampton gave money to the school!” Cavanaugh beamed, seemingly pleased to have made the deduction.

“A large amount, I predict,” Spearman said. “I can’t speak for Monte Vista, but at Harvard, if you can write a large check the administration will consider you a great writer.”

As they entered the building’s doors Spearman added, “I’ve never understood why so many professors have a dislike for capitalists. Capitalists give lots of money to colleges and universities. But the colleges and universities don’t honor these people for their business skills. They honor them because of their writing! Professors of English should admire people with such skills in writing.”

“Henry Spearman, the balding economics professor with a knack for solving crimes, returns in The Mystery of the Invisible Hand–a clever whodunit of campus intrigue, stolen art, and murder. Having just won the Nobel Prize, Spearman accepts an invitation to lecture at Monte Vista University. He arrives in the wake of a puzzling art heist with plans to teach a course on art and economics–only to be faced with the alleged suicide of womanizing artist-in-residence Tristan Wheeler. When it becomes clear that Wheeler had serious enemies and a murderer is in their midst, Henry Spearman is on the case.”