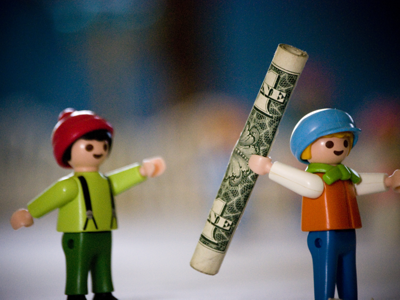 How you “title” the property you own is a lot more important than you might think. Failure to title your assets properly could undo the best will and trust planning that money can buy. And it could make a huge difference in how much estate tax your estate will pay and how much hassle your heirs will experience when you die.

Consider the case of Jonathan and Martha Kent. Jonathan spent his entire adult life building his business in Smallville to a value of $5 million. Then the Kents were in a car accident. Jonathan was killed instantly, and his wife Martha died four months later from her injuries. Their son Clark returned from Metropolis to handle their estate.

Let’s look at the different ways the Kents could have titled their property and the effect of each one. We’ll think of Jonathan’s estate as a baton. The various ways of titling that ownership are alternative ways to hold the baton.

If Jonathan was the sole owner of his small business, he was the only one holding the baton. When he died as sole owner, the baton fell to the ground. The required legal process called “probate” would determine the next holder of the baton. If he did not have a will, the laws of the state where he lived at the time of his death in effect would write his will for him, under its laws of intestate succession.

The probate process can take months, even years. The personal representative must gather together the decedent’s assets, pay his debts and taxes, and distribute the estate as directed in the will (if there was one) or as the laws of the state dictate if there was not. In Virginia, probate fees of about 0.15% of the value of the estate, are paid to the clerk of the court, and the executor of the state could charge an additional 3% to 5% of its value. On the Kent estate, probate costs alone might be well over $150,000.

You don’t want to drop a $5 million baton into probate.

Also, if Jonathan was driving and a lawsuit was brought about the accident, his entire estate could be subject to any subsequent legal action. During the probate process, it might be difficult to pay Martha’s medical bills.

Fortunately, no estate taxes apply when a spouse inherits assets. But just as probate has finished transferring assets to Martha, she dies, dropping the baton again and requiring another probate process.

During this second probate, assets are passed to the children, and all of the assets over $2 million are subject to 45% estate taxes. So the taxes on a $5 million estate would be $1.35 million. Even though the business is worth $5 million, Clark and his brother don’t have the money for the estate tax, and they are forced to sell rather than inherit the business. Clark must return to his dead end job as a reporter for a city newspaper.

In a JTWROS arrangement, two or more people hold the baton, and each one has an equal share. One person can sell his or her share and pass their grip on the baton to someone else. They can also break off their piece of the baton and keep the piece. But if they die, their share is given to those still holding on. The last one holding the baton owns it outright.

JTWROS does not require probate, which would make the transition of ownership from Jonathan to Martha easy and straightforward. But it does not protect the estate from legal action. Nor does it help solve the estate tax problem for Clark.

Joint tenancy titling trumps a will. Even if you have been careful in your estate planning documents, if you are not equally purposeful and intentional in how you title your assets you can ruin your plan. Financial accounts that use POD (payable-on-death) or TOD (transfer-on-death) arrangements, if sloppily done, can also thwart all your best estate planning intentions.

Tenancy by the entirety (TBE)

Only persons married to each other can hold property jointly as tenants by the entirety. With TBE, each spouse holds the entire baton. They can’t sell their share and pass the grip to someone else because they don’t hold a piece of the baton separate from the other tenants’ pieces. And they cannot break off a piece of the baton and keep it for themselves.

TBE can provide asset protection features unavailable in other forms of joint ownership. Suppose Jonathan’s accident was due to his negligence. If he and Martha held the baton as TBE, Martha can inherit the entire baton at Jonathan’s death, free of Jonathan’s liabilities.

In our litigious culture, wealthy individuals often have a bull’s-eye painted on their backs. Everyone should make asset protection a priority. You should probably have an excess liability insurance policy, often referred to as an umbrella. If you are married, your real estate should be held in TBE. Virginia law also allows married couples to title their investment assets (called personal property) as TBE. Generally speaking, creditors cannot seize assets held in TBE because doing so infringes on the other tenants’ rights to the entire baton. TBE isn’t perfect, but it does give some liability protection to married couples.

TBE, like JTWROS, trumps a will. It has to be integrated carefully with your estate planning documents to ensure that it will not thwart your plan to reduce your estate tax exposure.

Revocable living trusts are common estate planning instruments. They avoid probate and thus help families hold on to the baton. By themselves they don’t limit estate taxes or creditor claims, but they can be effective estate planning tools. In Virginia and many other states, the assets in your revocable living trust at your death are still subject to the claims of your creditors.

A bypass trust is someone who will hold the baton in a trust after you die, for the benefit of your surviving spouse. A bypass trust may provide Martha Kent with income from the business while she is alive, but it passes ownership in the business to her sons after she dies.

Upon Jonathan’s death, with proper planning he could have arranged to put as much as $2 million free of estate tax in a bypass trust for the benefit of his wife for her lifetime. Upon her death it will pass tax free to the children. Martha can leave an additional $2 million to her children tax free. With the wise use of a bypass trust upon the death of the first spouse to die, up to $4 million can pass to the children tax free, leaving only $450,000 worth of tax owed on the remaining million. With additional estate planning, the family can avoid even this tax.

Aside from the expense, estate planning remains a topic that few people want to contemplate. On the one hand, raising these issues with family members can make you feel like the prodigal son wishing his father was dead and he could enjoy his inheritance now. On the other, avoiding these issues can mean a lifetime of regret.

I’m very grateful that my father asked for an hour of family vacation each year to talk about estate planning issues and explain the plan. It may feel morbid the first time, but after a while, it seems loving and caring.

When people die without proper estate planning, the state distributes their assets in their own time. If someone involved is incapacitated, you may not be able to act on their behalf. Just because you are expected to take care of their affairs doesn’t mean you will have the legal right.

Clip this article and send it to your parents as a way to begin the discussion. They will realize you want to know exactly what to do in an emergency. For your own estate, bring this column to your financial advisor and ask for a review of your titling and beneficiaries.