While helping a family member out is noble, money often complicates the relationship. Because they love each other, family members are often willing to lend to other family members and probably will charge little to no interest on their loans.

However, there may be hidden expectations from both parties: the lender may have an expectation of being paid back in five years, while the recipient may think they have no deadline to repay the loan, or worse, they may see the money as a gift instead a loan.

These unspoken expectations can cause relational strife. Be honest up front about the terms of the money that is changing hands.

It may seem cold to write and sign a contract, but contracts exist to protect both parties. A good contract does not need to be complicated, especially between family members or friends, but it does need to clearly state what assets are changing hands and when repayment will take place.

For example, let’s say parents want to help their daughter buy a car after her previous car was totaled. They know she has not quite finished saving money for it, but they are willing to front the cash to purchase the vehicle now. They would like her to pay them back, either in installments, or when she has saved enough money to pay for the car.

The parents want to buy the car for their daughter because they love her and they know she needs transportation. But once the daughter has the car, she has lost much of the incentive to continue saving.

What should the family do? To avoid hurt feelings and misunderstanding, the parents could discuss their plan with their daughter and draw up a simple contract that both parties will sign.

A contract feels a little formal, but it also makes clear to the daughter what the parents expect, and with a discussion beforehand, the daughter can be honest with her parents about what she is able to pay. A discussion and a contract make clear what both parties expect and what they have agreed to, and allows them both to point to the contract to resolve family debates (though hopefully making expectations clear will prevent many disagreements in the first place).

They can either sign two identical copies of the contract, or sign one and make a copy so that the daughter and the parents can keep the contract for future reference. Then they can destroy the contract when repayment is complete, or keep it as a badge of success.

A contract could be as simple as this:

If it is true that families should sign contracts, it is even more crucial among friends. If friends are renting an apartment and only one name is on the official lease, the person on the lease should create sub-let leases for his roommates instead of relying upon verbal agreements to pay. That way there is something to point to and conditions that must be met if one roommate wants out before the lease’s term is up.

If a friend lends to another friend to start a business, they should write up a simple contract with conditions upon which the loan will be paid back. While there is plenty of room for both parties to negotiate, a written contract again gives both something to point to in case there is any question about expectations.

While it may seem strange to draw up a contract among friends or family, explaining the reasoning behind it may help smooth concerns that you are cold and that a contract seems heartless. You create clarity because you care too much about the relationship to let money arguments come between you. 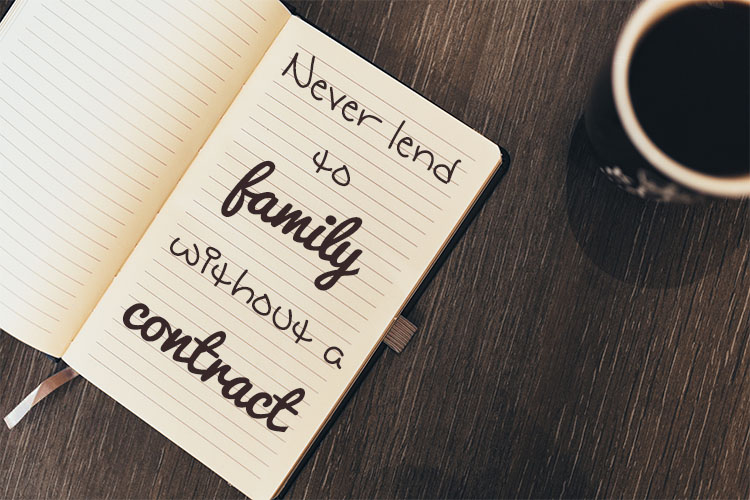