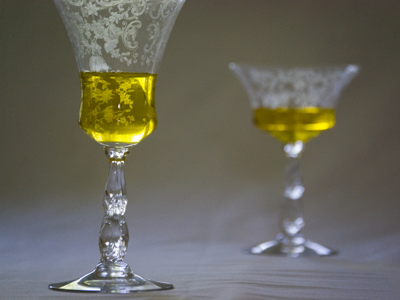 Dieting and budgeting face similar hurdles in the American lifestyle. Some of us live to eat; others eat to live. Attempting to reduce our spending is every bit as challenging as trying to slim our waistlines. Some shop to live; others live to shop.

We can better understand mindless spending by looking at some of the psychological studies that Dr. Brian Wansink describes in his book “Mindless Eating.” He explains, “Everyone–every single one of us–eats how much we eat largely because of what is around us. We overeat not because of hunger but because of family and friends, packages and plates, names and numbers, labels and lights, colors and candles, shapes and smells, distractions and distances, cupboards and containers.”

“We all think we are too smart to be tricked,” warns Wansink. “That is what makes mindless eating so dangerous.”

One study compared the amount people would drink using two differently shaped glasses. One glass was tall and skinny. The other was short and wide. Each glass had the same capacity, but people would drink 25% to 30% more from the short glasses than the tall ones.

Interestingly, our brains focus too much on the height of objects and underestimate the effect of their width. So people with short wide glasses had to fill them more before they believed they had consumed the same amount as those with the tall skinny glasses.

We all think we can’t be fooled by something as obvious as the shape of a glass. But our brains are wired that way, without exception. If you want to drink less, you can measure every portion or simply buy tall skinny glasses. Better yet, buy glasses that are very narrow at the bottom or elevated on a stem.

Finances work the same way, and by extension, so does mindless spending. Many families are struggling to get a handle on their savings. They are trying, often in vain, to find ways to cut back. But when we are worried about our expenditures, we tend to look at the dollar amounts more than the frequency of our purchases.

For example, a young woman named Emily inherited a sizable sum of money. She could have used it to make a sizable down payment on her first house. But instead of protecting her windfall, Emily attached a debit card to the account for the convenience of paying for a few items she needed.

In less than two years she had spent most of her inheritance in increments of no more than $35. That doesn’t seem like a lot of money because the $35 height is relatively small. Given a width of three times a week, the height isn’t even noticeable. The same $105 Emily spent would have seemed like a much larger budget item if it had been in a single purchase. In that case she might have refrained from handing over her debit card so casually.

Other purchases were $50 monthly memberships or $100 a month services. Very few of these purchases were over $100, but when they were added up, Emily had drained her account.

The frequency of a purchase matters even more than its height. But our brains tell us to be more concerned about the height.

Marketing firms use this principle all the time to bypass our defenses when they break annual purchases down into low monthly payments.

An offer I received in the mail recently explained its cost as “Only $4.99 per month with an annual subscription (billed as one payment of $59.88).” The advertised rate only applied if you were willing to purchase the entire year. If you wanted to be billed monthly, the rate was $9.99.

Advertising a $59.88 annual subscription fee as $4.99 per month relies on the fact that consumers are more sensitive about height than breadth. Note that the primary way they advertised the subscription, $4.99 a month, was not one of the options! Even more deceptive would have been making the offer 16.4 cents a day for an annual subscription. Less than a penny an hour!

They even marketed as a feature the service of charging your credit card automatically each year: “All subscribers get the hassle-free advantage of the Unlimited Automatic Renewal Program. At the conclusion of your first term and each subsequent term (one year or one month) we will automatically renew your membership upon expiration for the same period so you get continuous service unless you tell us otherwise.”

Madison Avenue takes advantage all the time of the way your brain works. So it’s in your best interest to learn to use your brain to your own benefit.

We recommend that every household have a dollar limit that domestic partners agree not to exceed without consulting the other. This way they can avoid budget busters, single items that can wreak havoc on a spending plan. The same caution ought to be put in place for any reoccurring charge, no matter what the price.

Similarly, when people are seeking ways to reduce their spending, they tend to look at big-ticket items or daily needs. A much less painful and more productive alternative is to look at the purchases you don’t have to decide about every day (e.g., automatic subscription services).

And each of these monthly fees is laden with extra features for an additional charge. Before the era of cell phones, I would save my quarters. If I needed to call home, I would stop at a pay phone. In addition to driving safely without the distraction of talking at the same time, which of course is still advisable, my phone expenses for the month were minimal. The latest base cost for an iPhone over two years is about $4,000, which could go a long way toward covering a family’s annual health-care costs.

If you can afford a full-featured cell phone, by all means indulge. I assume you’ve done your retirement planning and are saving more than enough each month. If not, and you only need a cell phone for emergencies, however, buy a single-use cell phone and keep it in your car. You will only pay for the minutes you use, and the money you save will be significant.

If you saved and invested $2,000 a year at market rates of 10% a year, you would have about a million dollars in 40 years. Every young person with an iPhone is missing a million dollars at retirement to fund that trendy subscription.

Cutting back on reoccurring spending is easier because you don’t have to decide every day to refrain from spending. Sometimes it is as simple as deciding to eliminate features. Extra charges accrue for voice mail, another for call waiting and still another for unlimited text messaging. If after you have dropped all these subscriptions and features you decide you really miss them, you can always add them back later.

If you are trying to cut back on your spending and save money, review every reoccurring charge on your credit card. Try living without the service or at least eliminating features. Many companies will release you from your contract and cancel your service for reasons of financial hardship. If you need to stop paying immediately, cancel the credit card being charged and get a new one.

Take your savings and set up an automatic transfer to your investment account. You can achieve big goals by making small changes consistently over time, which is the cornerstone of successful financial planning.

And although our brains aren’t wired to realize it, frequency matters even more than height.

Mindless Spending 2: You’ll Get By with a Little Help from Your Friends